For the ascertainment of groundwater depths, a model of the altitude of the free groundwater surface level above sea-level was first calculated from data collected at the groundwater measuring sites in May 2002. The procedure is described in the text of the Map of Groundwater Levels of May 2002 (cf. Map 02.12).

For areas with confined groundwater, the depth to groundwater is defined as the distance between the lower edge of the covering mantle (or the upper edge of the groundwater aquifer) and the surface of the terrain. In these areas, the ground-water level data of the measurement sites were therefore replaced by the support points which represent the lower surfaces of the covering layers (cf. Fig. 4). A small area in the north of Berlin, where the cohesive formations of the rupelton clay are present directly at the earth’s surface (near the Ziegeleisee [“Brickworks Lake”] in the Hermsdorf and Lübars areas,) and hence no usable aquifer is available, was exempted from the calculation, so that no groundwater depths were determined here.

With this compiled data base, the model of the groundwater surface which can be shown in the form of isohypses (lines showing the same altitude of groundwater level; cf. Fig. 6) was then constructed. For the interpolation, a variogram analysis was made, and the Kriging method was used with the aid of the program Surfer, version 8.0. 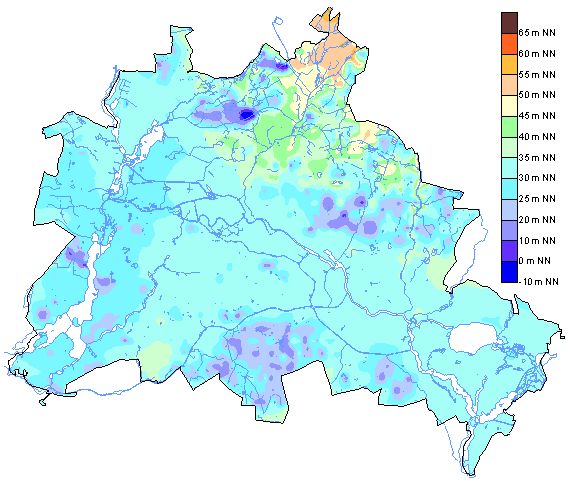 In the unconfined areas, the free measured groundwater pressure area is represented; in the confined areas, it is the lower level of the obstructing covering layers. This corresponds exactly to the actual conditions in nature. The groundwater surface in a bore or an excavation is tapped exactly at a certain altitude above sea-level, as can be seen from the Fig. 6. The representation and interpretation of this intermediate result is moreover an important plausibility check toward the determination of the groundwater depth, since by the integration with the altitude model incorporates new, independent information into the model. Any uncertainties in this intersection result may then result from implausibilities in one or the other of the two independent information sources.

By the inclusion of the lower edges of the obstructing surface layers, the areas in which the (confined) groundwater surface is located under a thick marl covering at a depth of roughly 0 m above sea-level are shown very clearly in Fig. 5, with the dark blue colors.

On the Barnim Plateau, the deep areas are located particularly in the northeast (Rosenthal) and along the southern edge of the ground moraine plate (Lichtenberg). The southern part of the Teltow Plateau (Marienfelde, Buckow) is characterized by maximum depth of groundwater surface of about 15 meters above sea-level. The locations of greatest altitude of groundwater surface, about 50 m above sea-level, are found in the northeastern, unconfined area of the Panke valley (Buch). In the glacial spillway, there is a continuous drop of the groundwater surface in the direction of flow of the two main receiving streams, the Havel and Spree, in an east-to-west and a north-to-south direction, respectively. This supports the posited hydraulic contact between the surface and groundwater.

Subsequently, a difference model was calculated from the Model of the Upper Surface of Groundwater and the Terrain Elevation Model. The width of the grid was 100 m. The depths to groundwater were broken down into seven depth classifications portrayed, as a map of different levels of groundwater. In order to differentiate depths to groundwater in the range of up to 4 m, especially in areas important for vegetation, an irregular division of classification was chosen.

For smaller areas it is possible to obtain more exact results with the digitalized data available, using smaller grid widths to interpolate the data, provided that the density of the Terrain Elevations Model permits this. Value limits used for classification of depths to groundwater can also be chosen arbitrarily, and are also available with discrete information in the calculated data base.