The total area at useful near-residential green spaces is differs greatly between the Berlin boroughs. The least amount of area is available in the borough of Weissensee, with 7 ha at its disposal, followed by Hellersdorf with 9.7 ha. By contrast, the borough of Spandau has green spaces with a total area of 180 ha; in Reinickendorf, there are 134 ha.

The degree of availability per borough is derived by taking the population into account. The standard value of 6 m2/inh. for near-residential green space is reached only in the boroughs of Zehlendorf and Spandau, while Reinickendorf, with 5.3 m2/inh. barely misses the target. With 0.7 m2/inh., Hellersdorf has the worst degree of availability value, followed by Friedrichshain, Weissensee, Wilmersdorf and Hohenschönhausen. In these boroughs, availability is below 1.5 m2/inh. (cf. Tab. 3). 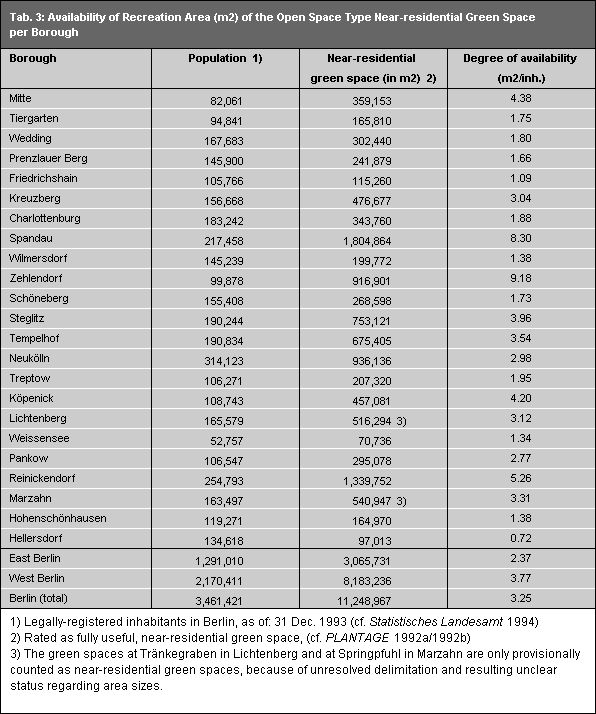 As can be seen from the map, a large portion of Berlin’s residential areas has no near-residential green space available, or has very insufficient availability.

An especially extreme situation exists, as is to be expected, in such inner city areas as the boroughs of Prenzlauer Berg, Friedrichshain, Schöneberg, and in parts of Kreuzberg and Neukölln.

The dense network of heavily-traveled streets in the inner city hurts the accessibility of many open spaces, so that frequently, even residential areas directly adjacent to a green space have to be considered as having no availability because of the barrier effect of the street (examples: the residential area at the Hasenheide Public Park, the Treptow Park, the Viktoria Park or the Weissensee Public Park).

In the densely built-up areas, green belts have a positive effect on open space availability. Their strip-like shape gives them an expanded intake area. As a result, these near-residential green spaces are accessible for many recreation seekers, which has positive impact on the availability situation (examples: the Panke green belt in Wedding, the green belt in Britz, the Wilmersdorf Public Park).

Generally, in inner city areas with insufficient availability of green space, closed block development prevails, or else these are core areas characterized by a low level of private and/or semi-public open spaces. In these areas serious open-space deficits exist, both in the private and in the public sector.

In the outlying boroughs the situation is altogether better. The available green spaces are frequently large; in some cases, forest areas come up directly to residential areas. The population density is obviously low, due to the less dense development structure.

Although the level of availability is essentially higher than in the inner city, there are also areas with considerable availability deficits in the outlying parts of Berlin. In Hellersdorf and Weissensee, for instance, the small number of near-residential green spaces means that very few residential areas have green space available. Also, there are parts of Steglitz, Tempelhof and Marzahn which have no green spaces in residential proximity.

As a rule, the level of private green space is relatively high in the outlying boroughs, because of the prevailing single-family and/or row house development, so that deficits in the public sector are compensated in part.

The situation is very different, however, in those developments on the outskirts of town characterized by single high-rises or high-rise chains, which in some cases have considerable open space deficits. While the availability in the Märkischer Viertel, in Gropiusstadt and in some residential areas of Marzahn is as high as 3.0 to 5.9 m2/inh., the new residential areas of Hellersdorf and Hohenschönhausen, as well as in northern Marzahn have extremely insufficient availability. Of course, the larger, semi-public open spaces of these residential areas provide a certain open space potential for recreation; however, the leisure quality of these spaces, which are generally conceived as green separators, is frequently too slight to permit them to compensate for deficits in public green space.