On account of the close relationship between the topics covered in Maps 08.01 – “Building Heating Supply Areas” (Edition 2005) and 08.02 – “Predominant Heating Types” (Edition 2005), a common text has been prepared for both maps.

Berlin is the largest contiguous built-up conurbation in Germany. Approximately 3.4 million inhabitants live in an area of 889 km2 (June 2004). The development of heating and heat supply to residential and commercial buildings, as well as the distribution of the various kinds of fuel, are tied to the evolution of the city and are characterized by its social structure and development history.

In the course of the industrialization period after 1875 and the dramatic population increase which this brought with it, Berlin’s old city center (within the present City-Rail Circle Line) developed largely into a city of tenements. On the edge of the inner city, the housing construction companies’ first settlements emerged. In the outer areas, villa colonies and garden city projects were built. Until the end of World War Two, the city’s heating fuel supply relied almost exclusively on lignite and anthracite.

Post-war development was marked by large-scale reconstruction and new building projects, which initially used row construction. From the 1960s to the 1980s, large developments and satellite towns emerged in the outer areas, while the inner city’s housing programs were initially characterized by demolition and construction from scratch. Starting in the mid-1970s, preservation-oriented forms of urban renewal were undertaken, primarily in Wedding and Kreuzberg (cf. Map 06.07, SenStadt 2002). The use of different fuel types for the heating of residential buildings and workplaces developed differently in East and West Berlin during this period.

In the western part of Berlin, coal was increasingly being replaced with other energy sources after the early 1970s. The choice of a substitute fuel type largely depended on local housing structures: in single-family and duplex homes in the outer areas, the primary fuel type used for heating was light fuel oil. For the heating of residential apartment buildings and workplaces, fuel types were chosen largely by proximity to heating supply networks (in the case of energy providers with pipe networks). In-plant oil-fired heating units were also common.

Until 1989, the large number of heating power plants in insular West Berlin facilitated a continuous development of district heating, which was supplied by the Berlin Electric Power Company (BEWAG). As BEWAG was traditionally focused on supplying electricity, however, optimization of its thermal technology structures has proven difficult.

In the eastern part of Berlin, heating relied almost exclusively on lignite and natural gas up to 1989 – in single-family and duplex housing areas and in multi-story old building quarters, but also in workplaces. Approx. 60 percent of the apartments in the eastern part of Berlin were provided with self-contained and/or communal coal heating in 1989; approx. 40 percent of the apartments were provided with district heat from heating plants and heating power plants. Because of usage restrictions in the former GDR, fuel oil was not made available to the heating market.

After 1989, city development in the reunited metropolis experienced several different stages. Between 1991 and 2000, approx. 150,000 new apartments were built. Approx. 60 percent of the newly erected buildings were a part of existing larger compounds. By 1992, construction of existing tower block building projects in the east of the city was completed. In the west, there was little activity in city development. Between 1993 and 1997, numerous major construction projects were undertaken, for example new suburbs in outer areas such as the former farmlands of Karow-Nord, and prestigious inner city projects such as Potsdamer Platz and the new government buildings. Since 1997, the number of new development projects has been declining throughout the conurbation. As a result of the decrease in city development funding, the number of new construction projects in 2003 was almost as low as in 1991. Following a boom of home building in the eastern outer areas and surrounding regions in 1998/1999, this area of development has also begun to stagnate. Nearly 80 percent of the expansive tower block developments in East Berlin, as well as many of the inner city’s old building quarters, have been rehabilitated with the help of state funding (structural renovations, improved residential interiors).

Energy politics, and with them the local heat supply market, changed radically after 1989. Whereas West Berlin’s insular geographical position and East Berlin’s centralized control structures had previously ensured well-defined supply networks, the city’s unification had a destabilizing influence on the supply of energy throughout the city. Berlin was hurriedly linked into the country’s nationwide power and gas networks, and in 1997, Berlin’s main energy supplier BEWAG changed from predominantly public ownership to being fully privatized. The Energy Law amendment of 1998 created new conditions for the domestic power and gas market (cf. Bundesministerium für Wirtschaft und Arbeit 2004). However, market tendencies until the end of 2003 have shown that Berlin’s established energy suppliers BEWAG and GASAG continue to supply the main bulk of power, district heat and gas.

Also since 1989, the Berlin Senate has widely advanced its energy politics to respond to global climate changes and optimize the use of energy in the local generation of heat. Measures have included:

A comparison of our last survey from 1994/95 to the data collected on heating-related energy consumption in 2000 (see table 1) demonstrates vividly the progress that has been made since the introduction of state-funded and private/corporate measures in the field of building heating.

Emission-reducing measures for domestic heating have proven more effective than for industrial production sites and power plants, as is shown by the lowered emission figures. 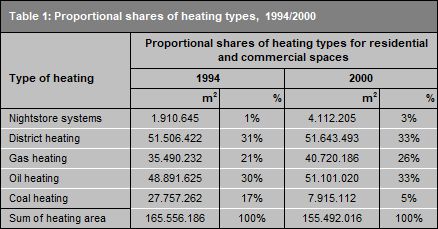 While the supply of energy, including electricity, still varied greatly between East and West Berlin in 1994, these differences had largely disappeared by 2000. This is mostly due to a dramatic increase (almost 70 percent) in the use of natural gas for heating; the increases in district heating (approx. 25 percent) and local oil-fired heating (approx. 35 percent) are significantly lower.

All of the heating types that have increased in usage, particularly in the boroughs of former East Berlin, have done so at the expense of coal-fired heating. Between 1994 and 2000, the total floor area heated with coal decreased by approx. 75 percent. Today, less than 5 percent of residential and commercial spaces are heated with coal.

Distribution of the different heating types in the 12 Berlin boroughs and the changes between 1994 and 2000 are illustrated in figs. 1 and 2. Note that in 1994, oil-fired heating had a relatively low share in the outer eastern boroughs (Treptow-Köpenick, Pankow, Lichtenberg, Marzahn-Hellersdorf), whereas coal heating had a comparatively high share. By the beginning of the new decade, this trend was reversed (for further data on the current distribution of heating types see the map descriptions). 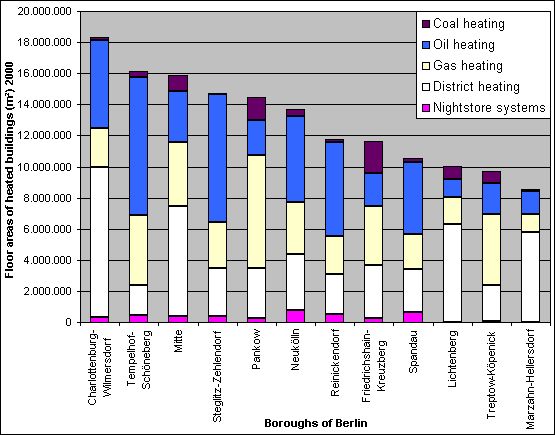 Fundamental changes in the supply of heating have already resulted in a significant improvement in air quality. Values for all directly emitted pollutants have decreased significantly over the past 10 years. The most drastic reduction is encountered for sulfur dioxide, which in the past was primarily emitted by power plants, industrial plants and coal furnaces. Fig. 3 illustrates the spatial distribution of SO2 emissions. 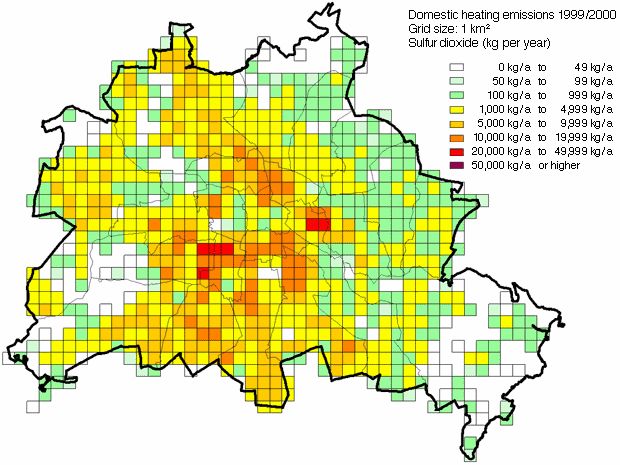 Whereas in 1994 42 km2 were recorded with SO2 emissions above 20 t/km2/a, only 6 km2 were recorded at the same emission level for 2000 (see figure 3). The highest emission levels caused by domestic heating are still to be found in the densely populated inner city boroughs, particularly Schöneberg und Friedrichshain – boroughs that also contain the most old buildings with oil and coal heating. Other densely populated boroughs such as Gropiusstadt, Märkisches Viertel, Hohenschönhausen and Marzahn, characterized by their tower block parks, do not display excessive emission levels, as these are largely heated with district heat. The emissions generated by district heating can be traced to specific heating power plants, which is shown in Map 08.02.2.

Carbon dioxide (CO2) has become a widely discussed topic in recent years, but it still cannot be reduced very efficiently through technical measures.

There are a number of cornerstones for implementing the governmental target of a 25 percent reduction in carbon dioxide emissions per capita by 2010; these include greater efficiency in the consumption of energy sources for heating and other purposes, as well as sensitive management of all natural resources. In December 1994, the state of Berlin adopted the Berlin Energy Concept. Among others, this stipulates a reduction in energy consumption for residential and commercial heating, particularly in public buildings. 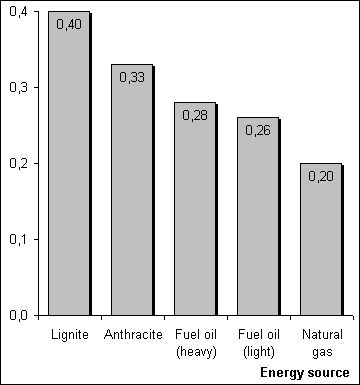 By 2000, energy-related CO2 emission was reduced by 14.0 percent. This reduction was possible primarily due to combined heat and power (CHP), improved energy usage in buildings, and greater energy consumption efficiency in commercial applications. 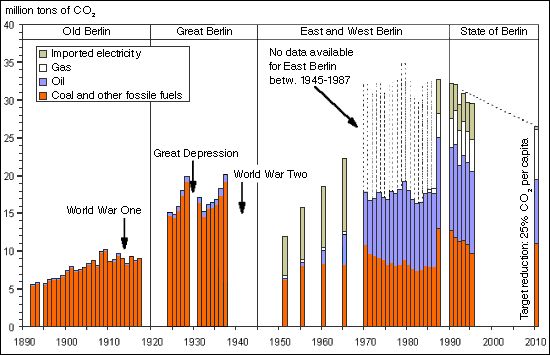 Only once a comprehensive energy consumption review has been compiled will it be possible to assess whether Berlin’s subsequent reduction in CO2 emissions is compliant with the target figures of the State Energy Program, which stipulate a temperature-adjusted value of 25.4 million tons of CO2.

The Berlin Energy Concept outlines an approach for the state of Berlin to autonomously reduce CO2 emissions by 25 percent between 1990 and 2010. Emissions caused by residential buildings are a focal point; these can only be reduced significantly if the energy consumption in old buildings is thoroughly modernized. Since 1990, the state of Berlin has been exemplary in its funding support for the rehabilitation of old buildings. Between 1991 and 2001, a total of approx. 5 billion euros was allocated to a number of rehabilitation programs:

The energy-related aspects of these programs aimed to improve the energy consumption efficiency of building shells (thermal insulation, window replacement, etc.), to improve the efficiency of heat supply plants, to replace inefficient stand-alone plants, to replace high-carbon energy sources such as coal and fuel oil with district heat (where feasible) or with efficient local heat solutions (employing e.g. natural gas), and to increase the use of renewable energies.

To date, these programs have reached more than a third of Berlin’s residential spaces and half of the city’s tower block parks.

Rehabilitation of tower blocks has resulted in a reduction of heat consumption for residential heating from approx. 200 kWh/m2a to less than 100 kWh/m2a; a similar reduction was achieved for rehabilitated brick buildings.

The exploitation of solar energy has evolved from a minor niche market to an accepted form of energy generation. Currently there are approx. 42,000 m2 of solar paneling spread over 2,780 solar heat collectors and approx. 5.3 MWp (“p” for “peak output at full solar irradiation”) being generated by approx. 900 photovoltaic systems. Considering that more than 12,000 GWh of electricity were available to Berlin’s consumers in 2000, the power generated by solar systems is still a very small fraction of the total power supply.

For further information on the individual programs, please refer to the State Energy Program itself or to the publication “Klimaschutz – Schwerpunkte in Berlin” (only in German).

BEWAG’s 12 heating power plants are crucial to the supply of heating in the city, as are the increasing number of local furnace plants. Some of these block-based heating power plants have thermal outputs and fuel types that class them as industrial plants requiring certification, and are therefore not included in the assessment of domestic fuel consumption. In 2000, there were approx. 250 certified furnace plants. Since the environmental friendliness of the district or local heating provided by these plants depends to a large degree on the fuel used for heat generation, Map 08.02.2 shows the fuel consumption of the larger plants (those generating more than 20 MW of thermal output) in the heating market for 2000.

Maps 08.01 and 08.02 show the current shares of individual energy carriers for residential and commercial heating in the built-up blocks of the city, and provide a valuable aid for the planned extension of district heat and natural gas within the supply areas. For new building areas, connection possibilities for the existing supply networks are shown.