The vertical extent of Berlin’s buildings is intertwined with the building history of the city, which includes the reconstruction measures after World War II. The descriptions for the Environmental Atlas maps “Urban Structure” (06.07) and “Urban Structure – Area Types Differentiated” provide detailed information on the settlement development of the city. Berlin gained more political and economic importance swiftly, especially after the founding of the German Empire in 1871. Settlement therefore developed just as rapidly throughout the various building eras.

The typical Berlin block development dominated tenement housing, initially only within the area of the Circle Line, which opened in 1877, later well beyond it and in some areas it has up to the present day. From 1853, the ‘Baupolizeiordnung’ (building regulations) laid down the height of buildings for Berlin amongst other things. It set the Berlin eaves height at 22 m, which still applies today in general (the map shows the calculated height of the building’s roof ridge, however). Including the basement, this usually provides space for six to seven storeys in a building.

As a result of this regulation and the fact that the reconstruction after World War II also returned to the previous floor plans and height structures of existing buildings to a great extent, large parts of Berlin’s inner city, even today, display a relatively uniform roofscape.

Approximately 3,400 ha, and thus about 10 % of the Urban and Environmental Information System’s (ISU) residential area types are part of the old building quarters in the inner city. They are directly affected by the eaves height restriction (cf. Map 06.08 “Urban Structure – Area Types Differentiated as well as Figure 4 and Table 1). 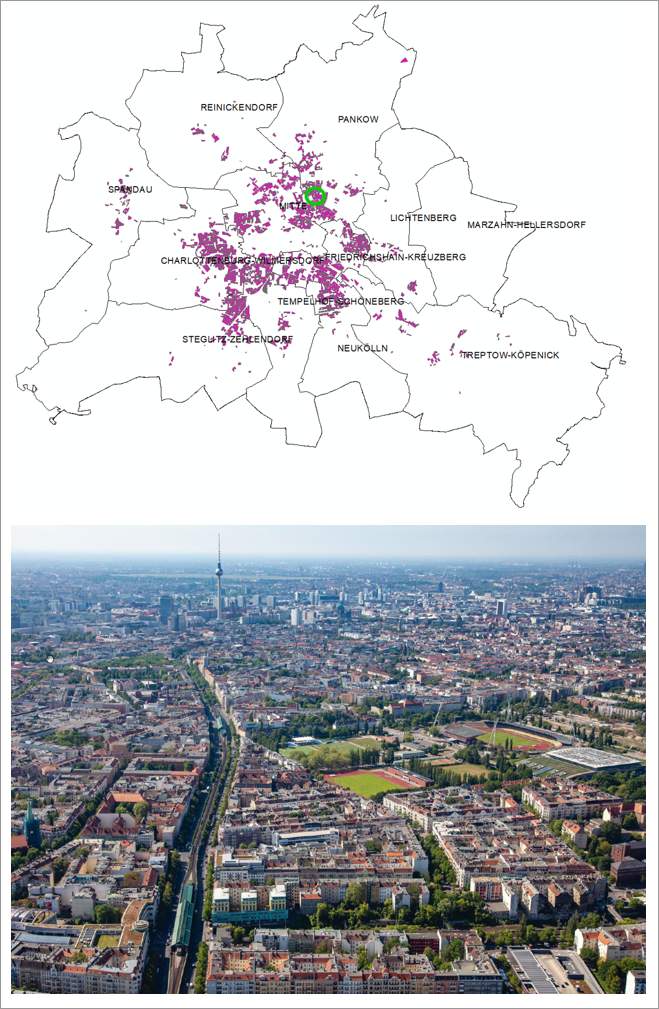 Both in terms of their location and the time of their origin, these old quarters contrast the types of single-family housing estates, as well as row houses and duplexes. Situated predominantly on the outskirts of the city, the latter account for about 45 % of the block (segment) areas that are assigned to area types of residential development and cover an area of about 11,500 ha. Here, buildings with ridge heights of up to about 12 m dominate the settlement pattern (cf. Figure 5 and Table 1). 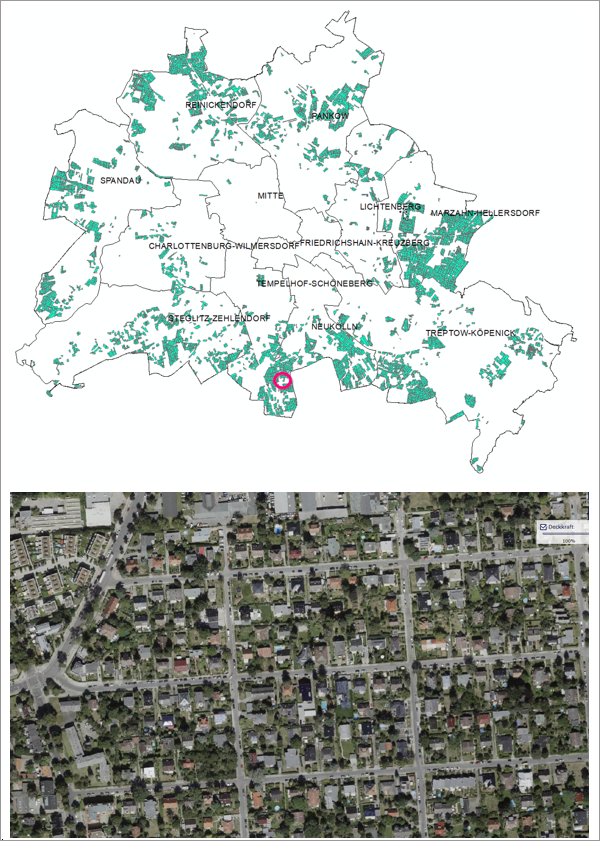 In residential development, area type 9, “Large estate with tower high-rise buildings (1960s-1990), 4-11 storeys and more”, contains the highest single buildings. When looking at the area types at an aggregated level of block (segment) areas, however, this is indiscernible, due to the large share of smaller (ancillary) buildings (cf. Table 1).

Although Berlin only has a small number of exposed high-rise buildings compared to other metropo-lises (cf. Figure 6), it does, however, feature Germany’s tallest structure, the TV Tower, at Alex-anderplatz (total height 368 m, recorded shaft height according to LoD2: 253 m). 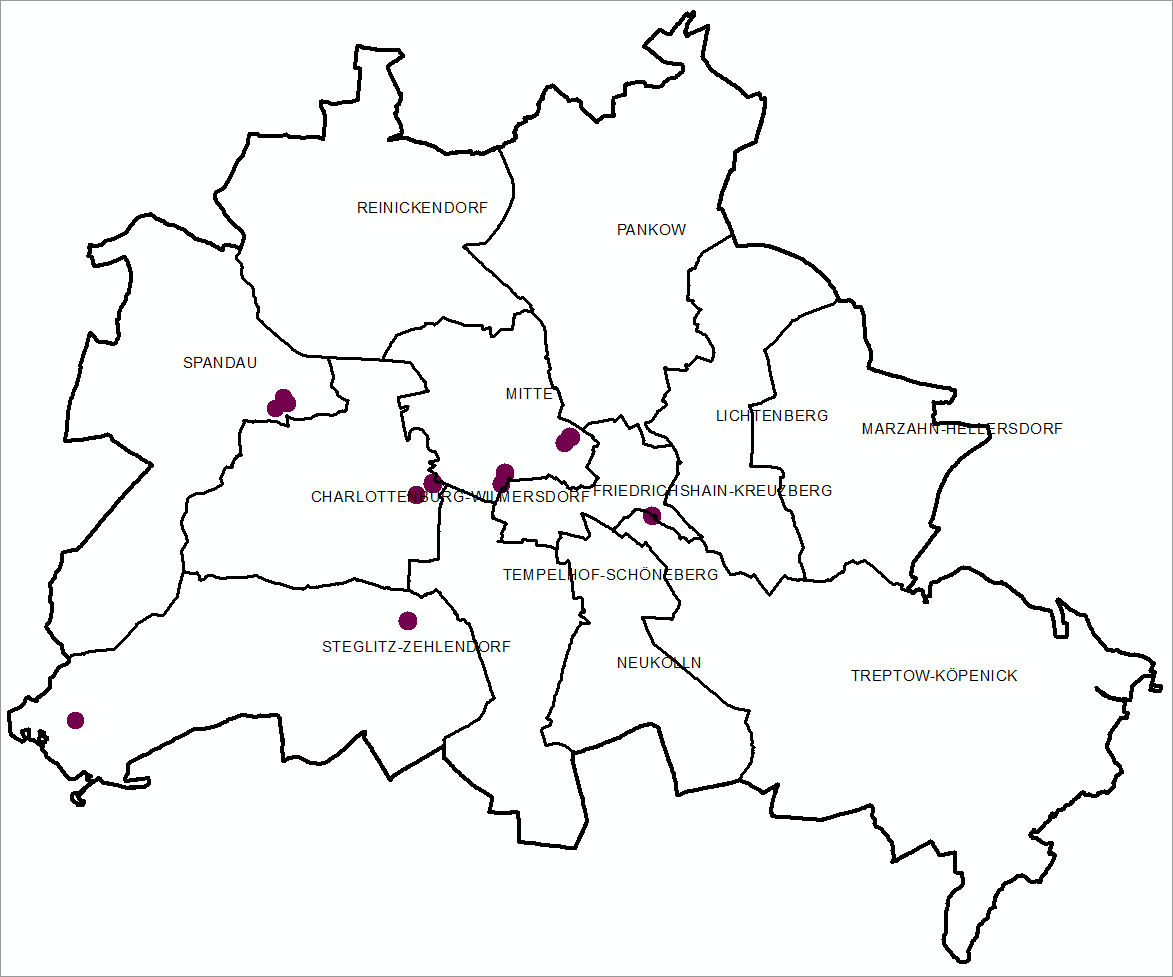 Fig. 6: Location of completed buildings and structures with a minimum height of 100 m in Berlin, displaying core areas only, due to scale (as of April 7, 2022)
Image: Umweltatlas Berlin

The following buildings and building complexes, for example, exceed 100 m in height:

as well as the two towers: 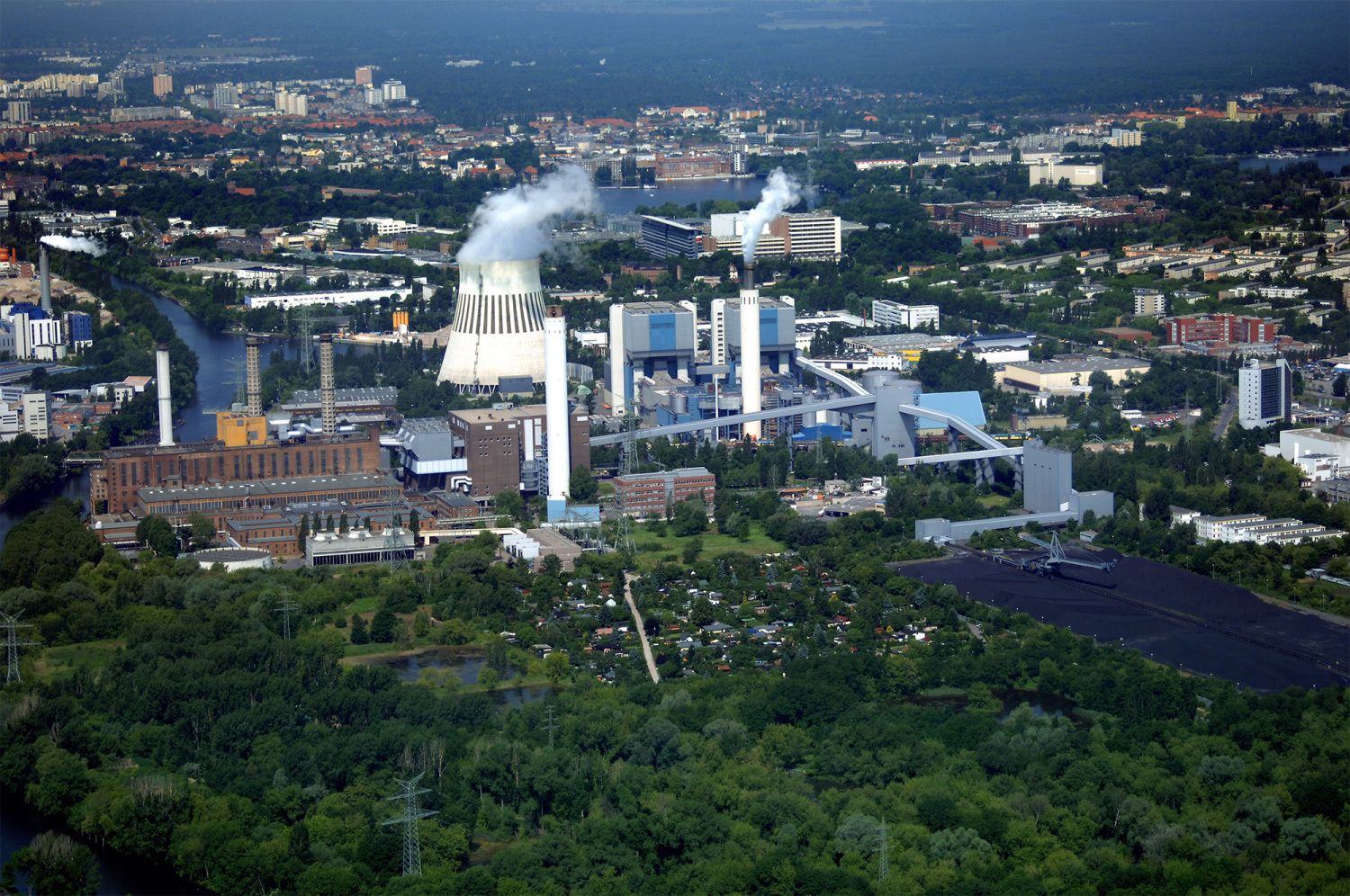 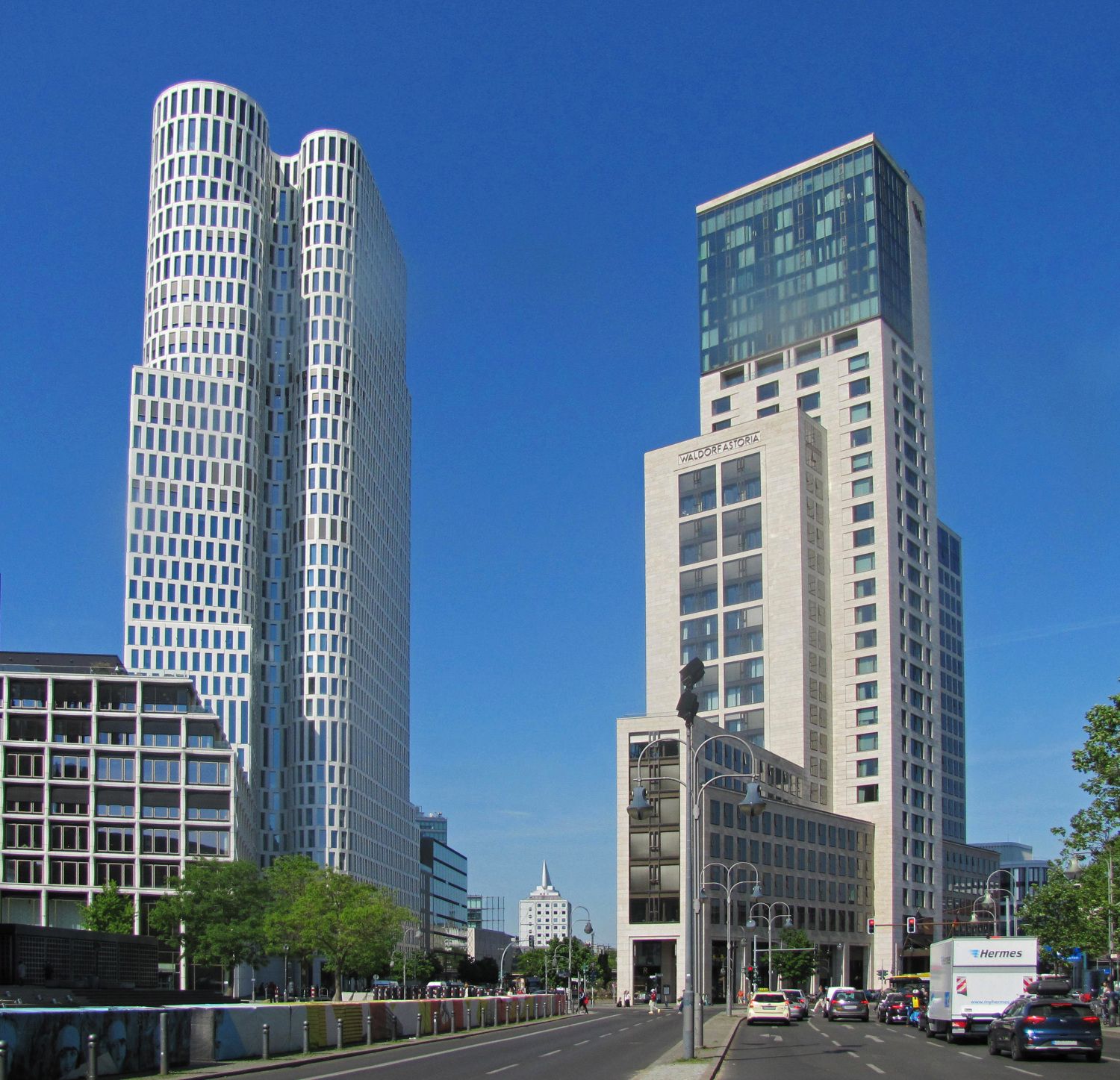 Table 1 presents the classification of the mean building heights and additional statistical parameters. It focusses on area types at the level of block (segment) areas, based on the Urban and Environment Information System (ISU). It is striking that even types with large (expected) building heights (e.g. area type 9, “Large estate with tower high-rise buildings (1960s-1990s), 4-11 storeys and more” and area type 29 “Core area”) display an ‘unremarkable’ mean height. This is mainly because individual heights vary greatly, as blocks or block segment areas of these area types contain a large share of low buildings or parts of buildings. The maximum heights of these area types, however, match the expected heights (89 m for type 9 and 123 m single building height for type 29). 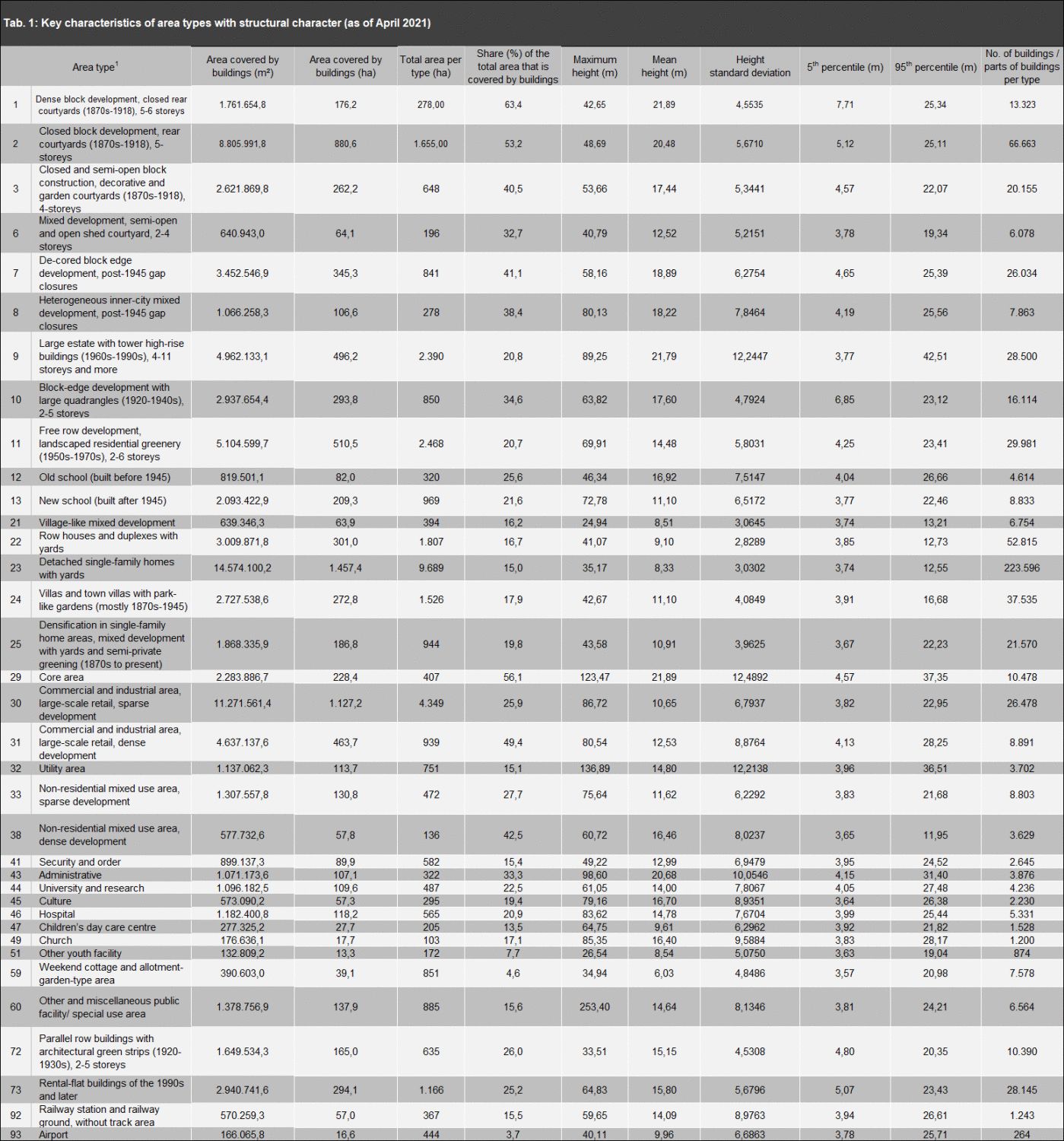 1) Only buildings higher than 3.50 m and area types with a building share of more than 10% were taken into account.

The variance, also evident in Table 1, is illustrated by Figure 9 with the help of three examples and their distribution reflected by means and the standard deviation. While the means of the selected area types are almost identical (cf. Table 1), they differ greatly in their variance. For type 1 “Dense block development, closed rear courtyards (1870s-1918), 5-6 storeys”, the respective building heights hover around the mean (smallest standard deviation), while for type 9 “Large estate with tower high-rise buildings (1960s-1990s), 4-11 storeys and more” and for type 29 “Core area”, these are widely scat-tered with a large standard deviation. This indicates that the blocks of these types contain a wide range of different heights. 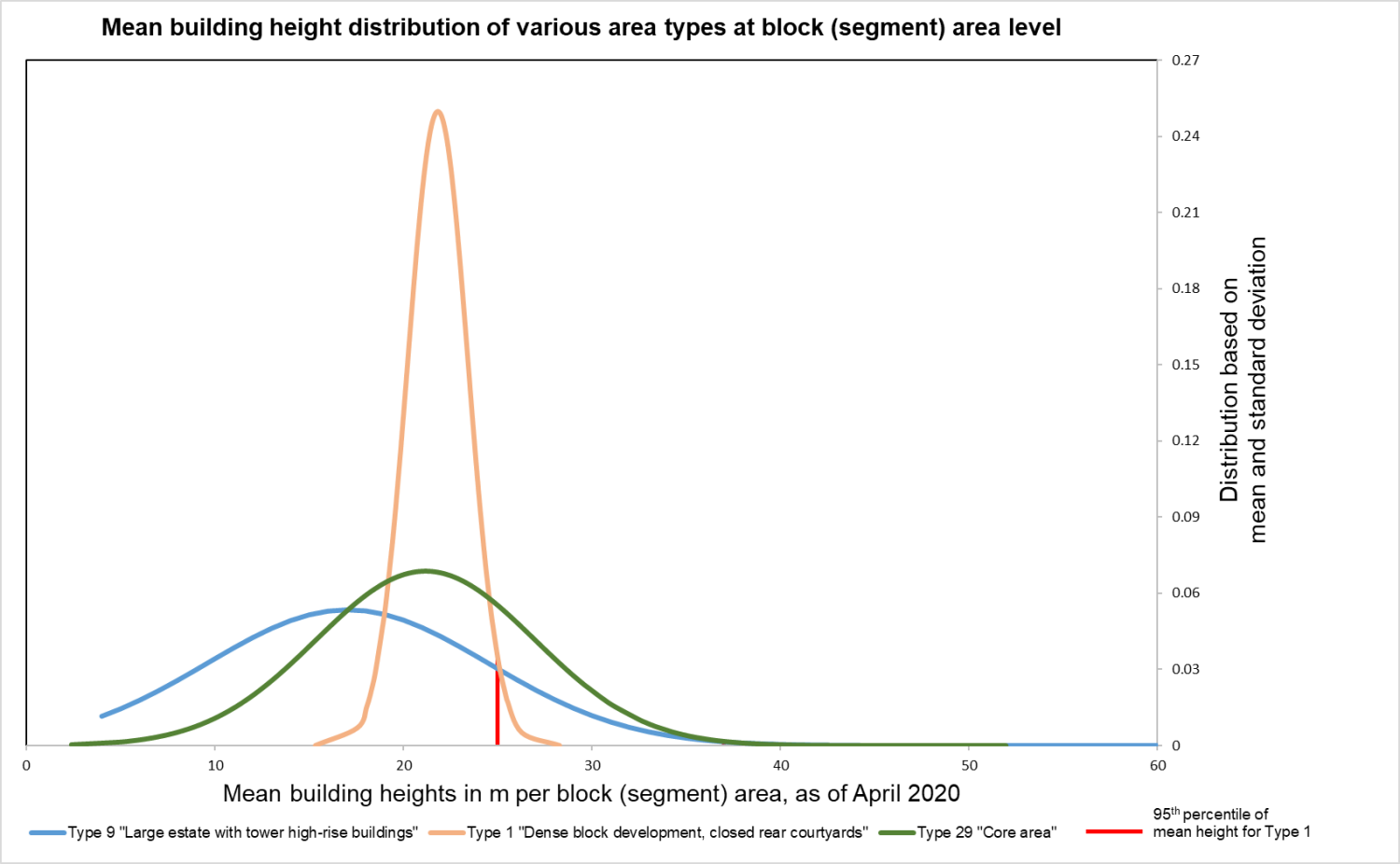