Metropolitan areas are subject to fundamental modifications in their thermal balance compared to the surrounding countrysides. Reasons for this are:

Especially problematic aspects of the resulting urban climate are considered to be an increase of air temperature, the risk of excessive humidity in summer months, and the year-round worsening of air exchange between higher atmospheric layers and surroundings.

Increase of air temperature in comparison to the climatically unaffected surrounding countryside depends essentially on the density of development and specific vegetation structures. These urban climate influences are confirmed by comparisons of summer temperatures in Berlin between different but typical residential locations, wooded (Grunewald), and open areas near the city boundary (Dahlemer Feld) (see Fig. 1). 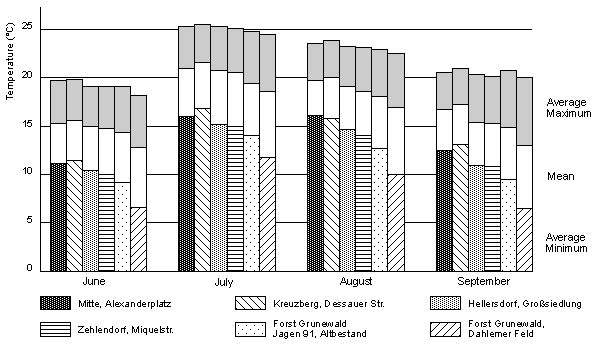 Differences in average temperatures are due less to average maximum temperatures than to average minimum temperatures. Lack of cooling during summer evenings and nights can lead to impairments of human well-being up to and including sleep and circulatory problems, and heatstroke. The highest temperatures occur in the inner city residential areas of Kreuzberg and at Alexanderplatz. Lower temperatures occur at night in the Hellersdorf large settlement because of its location at the city’s edge, but also because of its open building structures. The Zehlendorf borough profits from its high portion of vegetation. Temperatures at the Dahlemer Feld confirm the high nocturnal cooling rates of open field areas at the boundaries of Berlin.

The climate cartography also included areas located outside the city limits (cf. Graphic of Monitoring Routes in Map 04.04.4 SenStadtUm 1993b). Figure 2 shows the course of temperatures along a certain monitoring route. This route runs from Berlin-Mitte over the Spandau borough to Falkensee lake; from there south to the urban area of Potsdam; and subsequently through the Zehlendorf borough back to Berlin-Mitte. Measurements were taken in a low exchange nocturnal radiation period. Temperature differences between the surrounding countryside and the urban area are very clear. 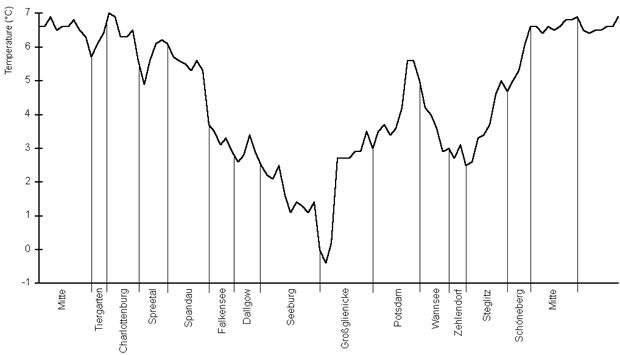 The presentation of long-term average temperatures provides a good basis for comparison with other areas, since these climate parameters represent, as a rule, a verified control quantity. They also provide a suitable basis for evaluating current measurements. Long-term mean temperatures are of fundamental ecological significance. The immigration of plant and animal species preferring warm habitats is encouraged by moderate to large increases in long-term mean temperatures and the decrease of the number of frost days compared to the undeveloped surrounding countryside. A rise of temperature from a mean of 7 °C to a mean of 10 °C reduces the number of frost days by one-half (von Stülpnagel 1987).