The spatial reference system was provided by the digital working map of the Environmental Information System (UIS). This working map contains individual statistical blocks with block numbers. Blocks with more than one use are divided into block segments. The numbering and street limit lines of blocks corresponds to those used by the Berlin State Statistical Agency in 1990.

If one statistical block was subdivided into several new blocks after 1990, the resident figures of the new blocks were added together and assigned into the UIS according to old block numbers and street limit lines. 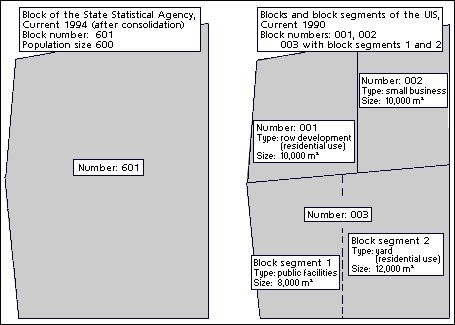 Table 1 lists the widely varying average population densities of Area Types. Areas containing sub-areas of greatly different population density were dealt with as in the following example in Figure 3. Block 003, Block Segment 2 is a “Garden” Area Type and Block 001 is a “Row Development” Area Type. One-half of the resident total retroactively determined by calculation for the Garden Type Block 003, Block Segment 2 (327 divided by 2 = 163.5) was assigned to Row Development Type Block 001 (273 + 163 = 436). Figure 3 gives the adjusted resident totals 436 for Block 001, and 164 for Block 003.

Blocks not contained in the file “Mandatorily Registered Residents according to Main Residence” were later assigned to the category “Less than 5 residents per hectare”. These were usually green and open areas, small business areas, traffic areas, core areas, public facilities, and utilities areas.