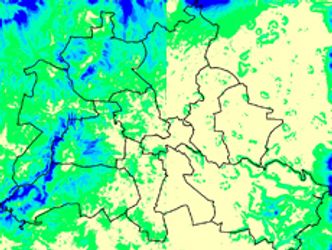 A good ventilation of settlement areas may lead to a decrease in the thermal burden. In Berlin, air flows directed from inner-city green spaces into built-up areas are immensely important. With the help of high-resolution wind arrows and cold air volume numbers, this map presents the local potential to ventilate built-up areas for the specified time. More information 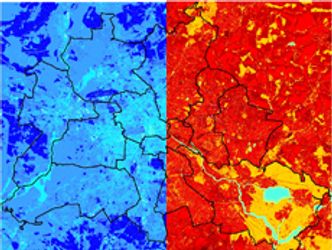 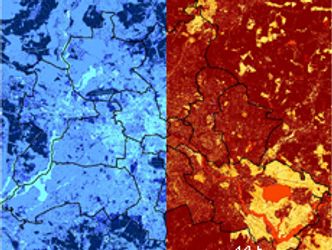 The radiant temperature forms an important supplementary component in the calculation of the bioclimatic evaluation index, as it has a major impact on the human heat balance. It captures the influence of different radiation fluxes on the human body. To locate urban climatic conditions, however, night-time observations are more suitable. Densely built-up areas exhibit the highest night-time temperatures, followed by bodies of water. More information 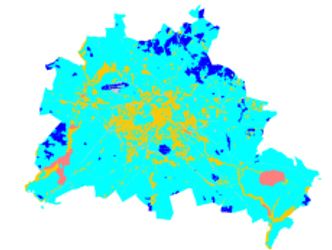 The cooling rate varies greatly based on the characteristics of soil and surface, which depend on the use. The city structures feature their very own characteristics. The lowest cooling rate occurs above water surfaces and in densely built-up settlement areas, due to a high heat conductivity and heat capacity. In contrast, forest areas and very green settlement types exhibit considerably higher cooling rates. More information 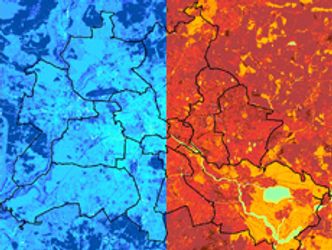 Meteorological parameters are not independent of one another in their effect on humans. Thus, they require an integrated analysis. The 2 pm PET values demonstrate that the thermal load occurring during the day highly depends on the local shading situation. Looking at the early morning conditions at 4 am, it is evident that fields and meadows have cooled down dramatically, while temperatures in the built-up urban areas remain considerably higher, depending on the construction density. More information 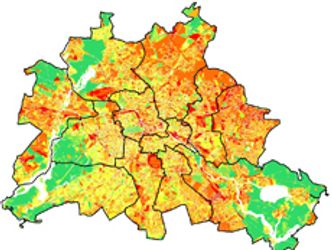 Climatological ‘threshold days’ indicate when a certain parameter, in this case air temperature, falls below or exceeds set threshold values. There is a clear dependence on the respective land use in the distribution of the number of days per year. The Eastern and Western city centres of Berlin exhibit both the highest day and the highest night indices. More information 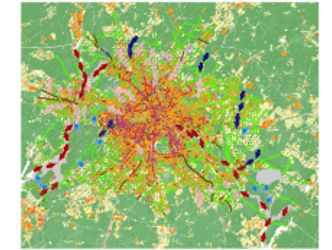 The Climate Analysis Map displays the current climate situation that is relevant for planning processes. For this purpose, the map presents the extent of urban overheating, the compensation effects of areas generating cold air and the spatial relationship between compensation areas and effective areas. It also includes the impact of surrounding open spaces on the urban area. More information