Renewable energies, i.e. primarily wind power, geothermal energy, biomass and solar energy, are inexhaustible sources of energy. They represent an important alternative or addition to fossil fuels in Berlin’s energy supply. The expansion of solar energy use is emphasised as a particularly important building block in Berlin’s climate protection strategy, since, with over 560,000 buildings in Berlin, there are rooftops and house façades aplenty, unlike suitable wind power sites. By 2050, the Berlin Senate aims to have achieved a climate-neutral energy supply of the city. The goal of increasing the generation and use of renewable energies on public buildings is established in Article 16 of the Berlin Energy Turnaround Act of March 22, 2016 (EWG Bln 2016). In addition, the expansion of renewable energies, in particular tapping into the potential of solar energy, was adopted by the Berlin Senate in the Berlin Energy and Climate Protection Programme 2030 (BEK 2030) (Abgeordnetenhaus Berlin 2016).

According to the BEK 2030, the “Masterplan Solarcity” (solar city master plan) forms an important stepping stone for overcoming existing obstacles and building on the currently rather limited development of solar energy. In September 2019, after an in-depth and hands-on process, the “Expertenempfehlung zum Masterplan Solarcity Berlin” (expert recommendations for the Berlin solar city master plan) was presented to the lead Senate Department for Economics, Energy and Public Enterprises. Combined with an extensive catalogue of measures, it forms the basis for the future expansion of solar energy in Berlin. The study confirms that Berlin has a potential solar power share of 25 %, provided that better framework conditions are put in place at federal level, creative approaches are taken on site and a variety of instruments is applied (Masterplan Solarcity, only in German).

Based on this, the Senate passed a comprehensive action plan to accelerate the development of solar energy in Berlin on 10 March 2020 (Senate Chancellery 2020). The first monitoring report on the “Masterplan Solarcity” has been available since January 2021 (SenWEB 2021).

The set of measures stipulated in the master plan is accompanied by the proposal of a Berlin solar law. Solar panels shall be mandatory from January 1, 2023. The installation and operation of photovoltaic systems will then be mandatory for new and existing buildings under certain conditions (SenK 2021).

So far, solar power has accounted for less than 0.5 % of the total generated power (Berliner Morgenpost 2019). To start tapping more into the potential of solar energy, both in the private and the public sector, the SolarZentrum (solar centre) Berlin was opened in May 2019. It is a component of the “Masterplan Solarcity”, which works as an independent advisory centre on the topic of solar energy (SolarZentrum Berlin, only in German). The centre is operated by the German Section of the International Solar Energy Society (DGS) and the Berlin Brandenburg regional association, supported by the Senate Department for Economics, Energy and Public Enterprises.

Previously, the use of energy-relevant data, such as solar data, and how it was presented on the map, was handled inconsistently using a variety of channels. In July 2018, the Energietlas Berlin (Energy Atlas, only in German) was created as a portal specialised in supporting the energy turnaround. For this purpose, it presents the most important data in a user-friendly and visually comprehensive way, which is updated regularly.

The Environmental Atlas contents regarding

As part of updating Berlin’s Energy Atlas, the frequency and quality of the data on solar systems, especially those with photovoltaics, will continually be optimised.

Since May 2022, a digital version of the solar calculator has also been available as one of the measures of the “Masterplan Solarcity” (SenWEB 2021). Homeowners and tenants, owners of commercial properties, housing associations and energy suppliers may use the map layers “Photovoltaic Potential” and “Solar Thermal Potential” to learn more about the options of using photovoltaics on roof areas and solar thermal energy on roofs. This measure is intended to further promote photovoltaic (PV) use in Berlin in particular (IP SYSCON 2022). The relevant map layers complement the two Environmental Atlas maps “Solar Systems – Photovoltaics (08.09.1)” and “Solar Systems – Solar Thermal Energy (08.09.2)” (see Map Description).

This information becomes even more important, as from January 1, 2023, solar systems shall be mandatory for new buildings and existing buildings following substantial roof conversions (Solargesetz Berlin 2021 (Berlin Solar Act 2021), only in German). According to this, owners of buildings with a usable area of more than 50 m2 are required to install and operate photovoltaic systems on their building. The law provides for exceptions, exemptions and alternative ways of compliance. Further information and a practical guide to the Solargesetz (Solar Act), in German, may be found here.

Compared to solar thermal energy, there are far more photovoltaic systems registered in Berlin. As of March 16, 2022, 11,414 systems were in place, with a total installed capacity of around 160 MW. The electricity that these generate per annum can only be estimated and is expected to amount to approx. 144 million kWh/a (minus 5 % for the generator output and an average electricity yield of 900 kWh/a per kW). Theoretically, this output could cover the supply of about 34,200 households with an assumed average electricity consumption of 4,000 kWh/a each.

Since the introduction of the Energy Atlas, the previous method of data recording used in the solar cadastre has been discontinued. The method switched to a combination of multiple sources (cf. Statistical Base) and ways of presenting analysis results. Figure 1 presents the range of development numbers by borough (Fig. 1a). Here, urban areas largely characterised by single and two-family homes account for the largest shares. In line with this, the lowest capacity class of up to 30 kW (Fig. 1b), the preferred choice for smaller roofs, predominates with about 9,875 of the 11,414 systems. The amendment of the Renewable Energy Sources Act (EEG 2014) of August 1, 2014 affected these development figures negatively. The number of systems installed prior to the amendment had been considerably higher. About 88 % of the capacity recorded for the year had been installed by August 1. The negative change in framework conditions associated with the amendment, affecting particularly small and medium-sized systems, can thus be assumed to have caused the slump in PV expansion in Berlin also in the following year of 2015. With the amendment, the EEG surcharge was also introduced for using your own electricity. The contracting model used by housing cooperatives in Berlin, for example, which supplied residents with their own PV electricity while the PV system remained the property of the investor, became much less attractive following this change. According to the Bundesnetzagentur (Federal Network Agency 2020), this trend continued and was observed nationwide in the two years following the EEG amendment coming into force in August 2014, with only approximately 50,000 new installations. In the meantime (as of June 2020), the nationwide increase for systems according to the EEG has returned to between 80,000 and 100,000 systems.

In terms of area-related photovoltaic capacity, the State of Berlin, with 179.5 kWp/km² (kWp = kilowatt peak), ranked above the national average of 164.2 kWp/km² and significantly above the capacity of Hamburg, for example, as the second largest German city (91.4), but also considerably below some area states (Bavaria, Baden-Württemberg) (Renewable Energies Agency, 2022). The existing data does not include off-grid systems, e.g. for self-supply and stand-alone power systems, such as PV modules on parking metres, on park lighting systems and in allotment gardens. These are estimated to amount to an extra 2,500 systems.

Fig. 1a: Development of photovoltaic systems in the State of Berlin, excluding off-grid systems, by borough (cumulative per year, as of March 16, 2022)

Fig. 1b: Development of photovoltaic systems in the State of Berlin, excluding off-grid systems, and capacity class (cumulative per year, as of March 16, 2022)

The previous method of data recording used in the solar cadastre was discontinued with the introduction of the Energy Atlas. The method switched to a combination of multiple sources (cf. Statistical Base) and ways of presenting analysis results.

As of December 31, 2021, there were about 8,200 solar thermal systems in the State of Berlin with an installed collector surface of more than 81,000 m² (last update as of December 31, 2015 for 7,733 systems, IP SYSCON 2016). Averaged over the years, the collector surface amounted to around 10 m² per system. As compared to the years prior to 2013, the following years saw a sharp decline in the growth of new installations, a development that is highlighted in Figure 2. Overall, a declining trend has been observed since then. In Berlin, solar thermal systems are mainly used for hot water supply and to supplement space heating. In addition, some larger solar systems are used for heating drinking water and swimming pool water; they are further used for solar air systems and air conditioning systems. Similar to the distribution of PV systems, solar thermal systems are clearly concentrated in the outer areas of the city, which are characterised by more rural types of settlements (cf. representation at postal code level in the Geoportal Berlin, map Solar Systems – Solar-Thermal (ST) Energy, “Number of Solar Thermal Systems by Postal Code” layer).

Fig. 2: Development of solar thermal systems in the State of Berlin in number of systems, by borough; (as of December 31, 2021)

Due to the incomplete recording of hot water supply systems, it can be assumed that the number of systems is actually higher. Flat plate collectors were chosen for the largest number of installations. Table 1 shows which collector types were installed in 2014 and 2015.

Most solar thermal systems in Berlin were mounted on single-family homes. Table 2 displays the number of systems per building type according to the utilisation details presented in the Property Map ALK (SenStadtUm 2016), which was still in use at the time.

In Berlin, the number of new solar thermal systems has dropped dramatically since 2013 as compared to previous years and has continued to further decrease since then. The lowest increase in number and capacity of new installations since the year 2000 was recorded in 2014. In 2021, the increase nearly doubled from the previous year, with 145 new installations.

From 2015, the data for Berlin has been provided by the Federal Office for Economic Affairs and Export Control (BAFA), which is aggregated at a more general level and does not provide detailed information. Conclusions regarding collector types, building types or collector surfaces can therefore no longer be drawn.

Across Germany, the growth of new solar thermal collector surfaces has slowed since 2015, and by the end of 2021 it had dropped to a growth rate of below 600,000 m²/a. Generally, the curves for both growth (in area) and for the number of systems have flattened considerably in the last few years (German Solar Association 2022). The situation in Berlin therefore also reflects the national development (cf. Fig. 2).

The comprehensive analysis of solar irradiation is used to calculate the usable radiation and is captured by an annual sum (IP SYSCON 2022). For the Berlin area, the Deutscher Wetterdienst (Germany’s National Meteorological Service, (DWD)) provides an average annual sum of global radiation, which consists of varying proportions of direct and diffuse solar radiation. It is measured in relation to a horizontal plane and ranges between 1,081 and 1,100 kWh/m2 for the current-long term observation period (1991-2020). The irradiation measured in the Berlin area is thus almost exactly in the middle of the range recorded throughout Germany (cf. Fig. 3). A comparison of the last two reference periods 1981-2010 and 1991-2020 reveals that the solar irradiation in Berlin and Brandenburg increased by 40-50 kWh/m² per year, i.e. about 5 %, as a result of climate change.

The irradiation on a horizontal plane is influenced by a variety of factors depending on the geographical position (cf. Methodology). 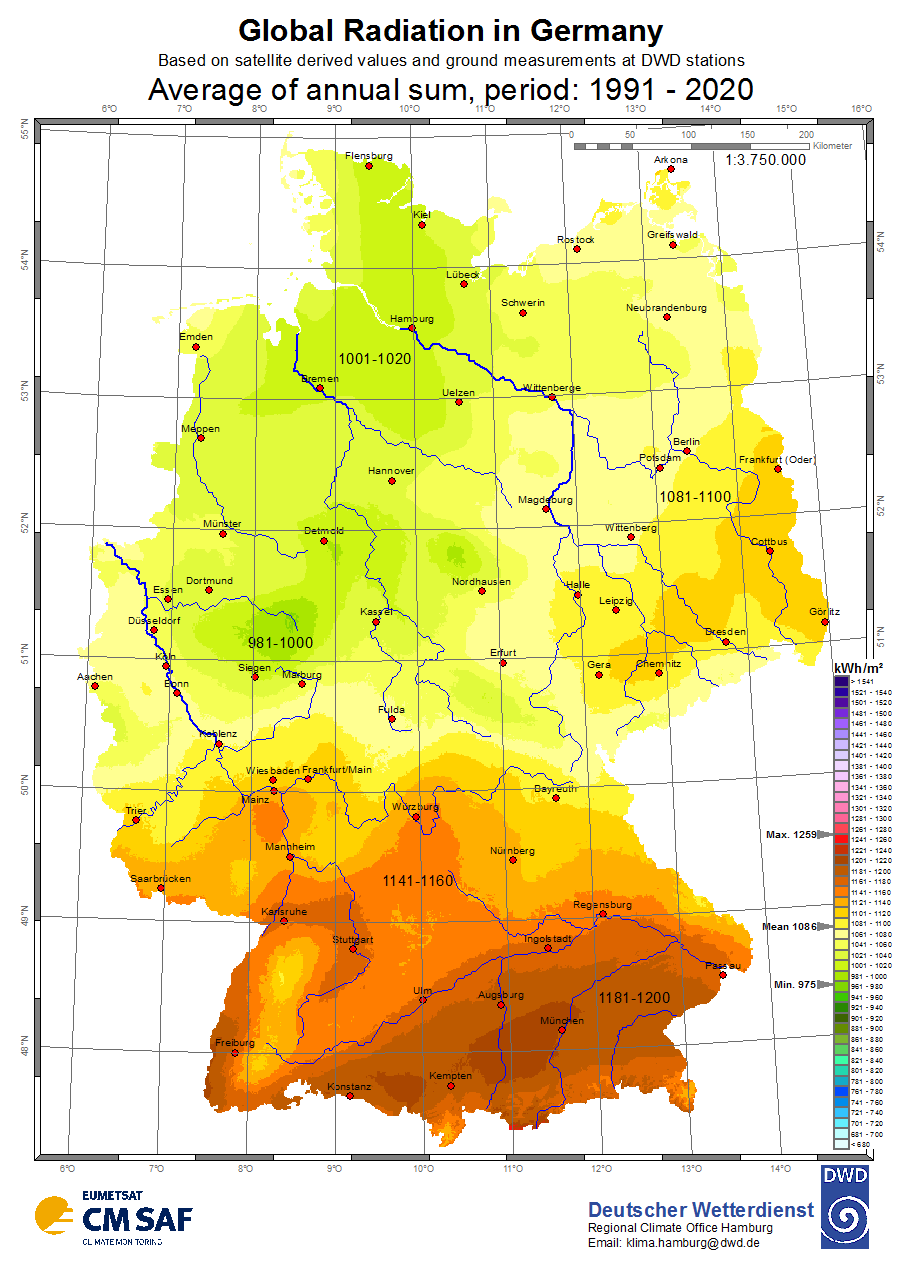 Fig. 3: Average annual sums of the global radiation in Germany for the period from 1991 to 2020 (unaltered reproduction DWD 2022)
Image: source: Deutscher Wetterdienst