Map 02.13.3 Total Runoff was only published in the digital edition of the Environmental Atlas. It shows total runoff values in the range of 350-450 mm/a for the highly sealed inner city area (S-Bahn-Ring – City Rail Circle). There were higher values for extremely high sealed areas in the city center and for some industrial areas. Only about 150 mm/a evaporates here, related to precipitation observations (measured in 1 m above the ground) that are about 10 – 15% under the precipitation measured at the soil surface. Loosely built-up outer districts show runoffs of 250-300 mm/a. Berlin had values of only about 150 mm/a. Compared to the runoffs of unsealed outer areas and surrounding areas, Berlin can be viewed as an island of strongly increased runoffs. The reduction of evaporation by sealing and lack of vegetation lead to runoffs 2 or 3 times greater than would occur under natural conditions.

The 02.13.2 Map of Percolation gives an initially surprising picture. It shows that about 120 mm/a percolates in the inner city. This is almost as much as in forests. Clearly higher percolation rates of 200 mm/a are shown in the loosely built-up settlements of outer districts. Regions with a low degree of connection to the sewage system have higher rates of about 300 mm/a. Settlements not connected to the sewage system show percolation of total runoff of about 300-350 mm/a, with maximum values over 400 mm/a.

It may be determined that:

The glacial valley watercourse is marked by permeable sands overlaying groundwater. Percolation to groundwater is direct and complete. Percolation corresponds to groundwater recharge. The ground moraine flat uplands in the Barnim and Teltow areas however, are overlaid with clayey layers of low permeability; these are usually over confined groundwater. The deeply-cut flows here are mainly fed by confined groundwater and/or by way of sandy and thus permeable layers in the ground moraine. Only the (calculated) percolation not discharged through receiving streams could be seen as true feeding of the main water aquifer under the ground moraine. This water reaches the glacial valley watercourse as underground flow. The division is dependent on the specific hydrogeological conditions. A comparison of measured and calculated flows shows, for example, that in the catchment area of the Neuenhagen Mühlenfließ about 35 % of calculated percolation discharges underground into the glacial valley watercourse. The Tegeler Fließ discharges to the surface almost all runoff formed by the percolation of its catchment area.

There is no information to indicate if some highly sealed areas discharge precipitation by way of the sewage system. This is the reason that total runoff in these areas is given as percolation in the map. The degree of sealing and the size of runoff make it seem improbable in some cases that the water actually percolates. It would seem that surface runoff tends to be underestimated and percolation to be overestimated.

The aid of area parameters of the reference areas enabled runoff volumes to be calculated and balanced (cf. Tab. 3). 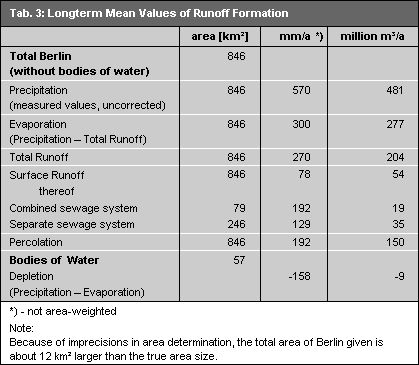 Calculations show that about 60 % of precipitation evaporates, leaving about 200 million m³/a available as total runoff. Three-quarters of this percolate into the ground; one-quarter is diverted by the sewage system. The combined sewage system (waste water and rainwater) only takes up about one-quarter of the total area connected to the sewage system, but more than one-third of surface runoff is formed in it. If one compares the percolation of 150 million m³ (which does not entirely reach groundwater) with the drinking water use of about 250 million m³/a, then there is clearly a considerable deficit. This deficit is compensated for by surface flows such as the Spree and Havel rivers, and the removal of groundwater from surrounding areas. Water works use surface water in the form of bank filtrate groundwater removals (well galleries in the vicinity of bodies of water remove water that has been filtered through the banks of the body of water) and groundwater recharge plants. 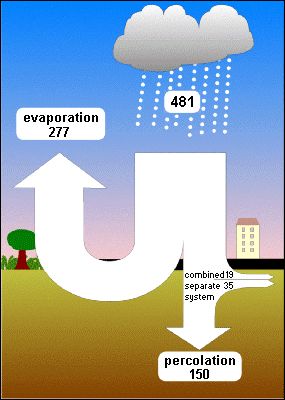 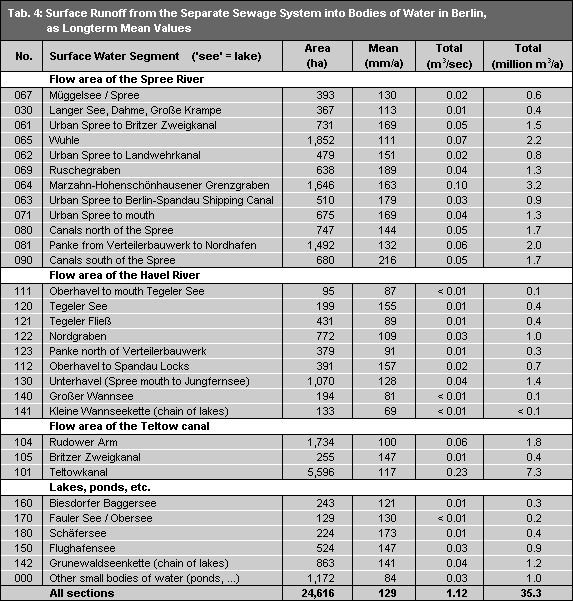 The ABIMO model/program is an instrument enabling simulations with variable initial conditions. The estimation of changes to be expected in the water balance because of construction projects is especially important. Other applications include the estimation of effects of de-sealing measures and disconnection measures. Differentiated initial data enables ABIMO to be applied to individual plans at the micro level of property lots. Changes of model parameters are possible at any time by using the results of current studies.