The Map of Total Runoff is the edition updated for Berlin from Map 2.03 (Runoff formation from precipitation and mean annual precipitation) from the "Ecological Resource Planning for Berlin and surrounding countryside" of 1991/92. The map scale was enlarged from 1:200,000 (grid area: 2.5 × 2.5 km) to 1:125,000 (grid area 1 × 1 km). Area information and calculations refer to it. Surface waters and lowland areas with near-surface groundwater were proportionately registered for the grid area and runoff calculations correspondingly taken into consideration. The runoff calculations refer to the precipitation values mentioned above, 1961 – 1990.

Information for land use: 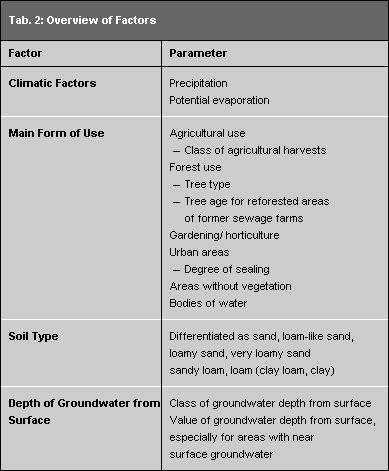