Generally, an increase in ubiquitous and civilization-friendly species among the breeding bird species can be observed, while endangered and specialized or demanding species are declining. This is in principle due to anthropogenic environmental changes (habitats which are deteriorated, isolated or too small). In the short-term, however, natural population fluctuation can also occur, which is due to droughts or hard winters, small population sizes or high space requirements and a strong fluctuation dynamic and/or high mobility of a species.

The most endangered bird communities in Germany north of the crest of the Central Mountains are presently those on open farmland, followed by the bird communities of the moors, heaths, sedge marshes, bulrush-beds, alder swamps and moist inland grasslands (cf. Fig. 4). 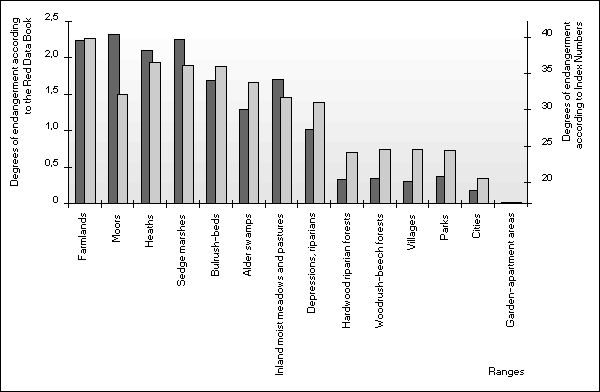 Fig. 4: Threat Degrees to Bird Communities in Northern Germany According to the Red Data Books and Index Numbers
Image: Flade 1991

Non-built-up areas in the city which are small and isolated (such as farmlands, meadows and forest strips) tend to be estimated too highly in the potential evaluation.

This gives reason to assume a good endowment of breeding bird habitats in settled areas. In Berlin, the residential-area habitats are especially extensive and typically distinctive, so that the corresponding indicator species can develop well. By contrast, the open landscape in Berlin is affected relatively negatively by small size and proximity to urban structures. Therefore, indicator species typical of open landscapes can settle there only with great difficulty.

An overview of the map reveals a relatively strong scattering of the balance-sheet values ascertained, even if areas with balance-sheet results tending in a very similar direction, and also transitional areas, can be determined. This scattering is explained by the fact that the balance-sheet was necessarily referenced not to single areas, but to grid squares of the breeding bird atlases, so that often different habitat types were rated jointly. In the case of airports, for instance, the adjacent areas (industrial areas, allotment gardens, or also the Airport Lake at Tegel Airport) located in the respective grid squares would always be included in the evaluation, so that different valuations emerged. The level at which analyses and statements are generated cannot therefore be the single area or the individual grid square. Rather, a larger area should be examined in its context. Thus, in grid squares with small indicator species groups, even the absence of one indicator species can mean the assignment of the grid square to another balance level (4 of 7 indicator species = level 40 – 60 %; 5 of 7 indicator species = level 60 – 80 %), although the mapped indicator species figures do not differ significantly. This applies to the area of South Kaulsdorf – South Mahlsdorf.

Nevertheless, areas with generally good and generally poor balance-sheet results are separated relatively clearly from each other.

Good balance-sheet results (60 – 100 %, i.e. a high level of agreement between expected and actual indicator species populations) could be ascertained especially in areas with garden-apartment and single-house development; other inner-city areas, too (old-town areas, mixed areas, industrial areas, allotment gardens, cemeteries, parks), did quite well in some cases. These are, however, precisely the areas to which slight avifaunistic value was attributed. More remarkable are therefore some undeveloped areas with good balance-sheet results, around the Spandau Forest and the Falkenhagen Field, where living conditions for the indicator species examined were evidently more favorable than in other forested or agricultural areas of Berlin.

Rather poor balance results (0 – 40 %, i.e. slight agreement between the expected and actual indicator species populations) were achieved in non-built-up areas on the edge of the city. These include particularly agricultural areas, bodies of water and banks of bodies of water, which are, however, of especially great potential avifaunistic value, as well as many forest areas of medium avifaunistic value. In general, indicator species groups appear here which contain larger numbers of demanding and rare species; however, their habitats are subjected to high use pressure through recreation-seekers, athletes, agriculture or a high pollutant load. Additionally, the habitats are frequently isolated and very small (such as reed-beds, small bodies of waters or farmlands), which leads to large indicator species groups per grid square; however, their occurrences are less probable, and/or hardly to be expected in reality.

Rare and endangered bird species are to be found mostly on the outskirts of town. Particularly undeveloped areas with a near-natural vegetation structure, especially agricultural areas, show a high number at Red Data Book species. These include the Gosen meadows, Tegel Creek, Köppchen Lake, Karow ponds, the Spandau Forest and the Gatow/Kladow fields. Especially in the area around Gosen, many endangered species can be attested.

If one compares the East and West parts of Berlin, some differences become obvious.

In the eastern part of the city, significantly more extensive areas with use changes are to be found than in the western part. Thus, even worse indicator species balance-sheet results are to be expected for the new residential areas in Marzahn, Hellersdorf and Hohenschönhausen, or in the reafforested sewage farms at Buch, than is apparent from the present map of exclusion areas (i.e., areas not incorporated into the evaluation due to essential use changes since 1980).

Some city center and old building areas in the eastern part of Berlin (Mitte, Friedrichshain, Lichtenberg) show better balance-sheet results than corresponding areas in the western boroughs (Kreuzberg). The major reasons to be cited here are the substantially more advanced reconstruction of the urban neighborhoods in the west, involving the destruction of nesting possibilities for indicator species, as well as greater density of the built-up city areas, with less open and vacant spaces. For this reason, a decline of the occurrence of breeding bird species must be expected due to the reconstruction and new building efforts in the eastern part of the city.

Overall, the areas with low potential avifaunistic values and few Red Data Book species did better in the balance-sheet than the more highly rated areas with more endangered bird species; thus built-up areas generally had better balance-sheet results than the undeveloped outer areas. Less endangered urban species evidently have better living conditions than the indicator species for more near-natural habitats. This is also evident from the avifaunistic valuation of the respective areas.

The result also demonstrates again the importance of certain minimum sizes for the occurrence of habitat-typical indicator species. It shows, too, that especially small inner-city near-natural areas decline in significance if they are without connection with other habitats.