Water Conservation Districts and Groundwater Use 1995

Berlin Public Water Companies waterworks (except the Buch Waterwork) are located in the Warsaw-Berlin pleistocene watercourse or the Havel channel. Private sector water supply plants are located throughout the city.

The Stolpe Waterwork is located in Brandenburg. It is operated by the Berlin Public Water Companies and serves the drinking water supply of Berlin and a few nearby communities in the state of Brandenburg. The conservation districts of the Staaken, Eichwalde and Erkner Waterworks, which serve communities in the vicinity of Berlin, are located both inside and outside Berlin. These conservation districts are maintained under the Water Authority Directive for Provisional Protection of Berlin Conservation Districts, or under a Brandenburg ordinance.

Amounts withdrawn by the Berlin Public Water Companies have risen ever since the beginning of public water supplies (cf. Tab. 2). A clear reduction of withdrawal amounts occured after World War II. West Berlin withdrawal amounts steadied in the mid-70’s. In East Berlin there was a continual increase until 1989 (cf. Fig. 4). 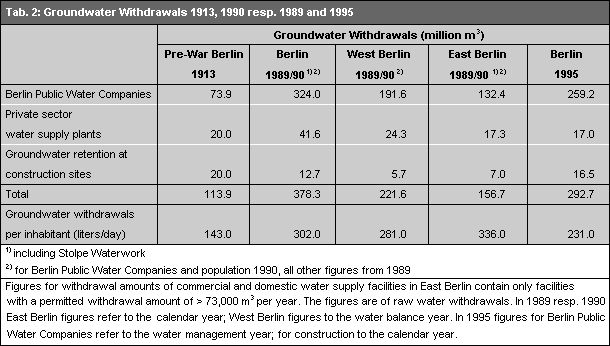 In 1989, the Berlin Public Water Companies (including Stolpe Waterwork) removed 358.4 mil. m3 of raw water from groundwater. In 1995, 259.2 mil. m3 of raw water were produced (including Stolpe Waterwork). The withdrawal volume of the Berlin Public Water Companies sank 23 % from 1989 to 1995 (cf. Fig. 4). Factors for reduced raw water production were: the closure of many industrial facilities in East Berlin; price structures of the waterworks (increased price for water); and improved technologies which enabled domestic consumers to reduce use. 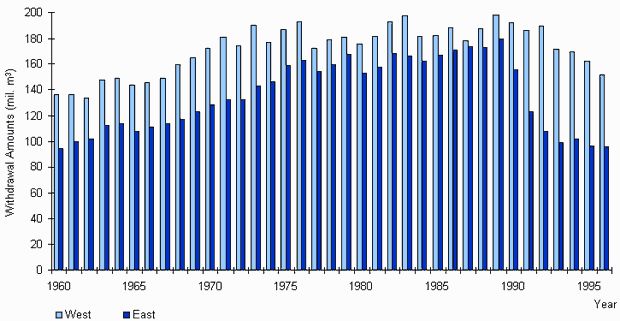 Figures are for withdrawals of raw water and refer to (including Stolpe Waterwork) the water management year. The sum for 1973 includes 8.2 mil. m3 for filling Teufelssee lake in Grunewald. Figures include Jungfernheide Waterwork amounts mainly used for restoration of groundwater and not for the drinking water supply: 1990, 5.7 mil. m3; 1995, 4.1 mil. m3; 1996, 3.4 mil. m3. Figures for the Friedrichshagen Waterwork 1996 water management year include 1.8 mil. m3 from Gallery A which were discharged to the Münchehofe clarification plant; and 158,040 m3 of a Gallery I well discharged to the Krumme Lake biotope. This water was not used for the drinking water supply. 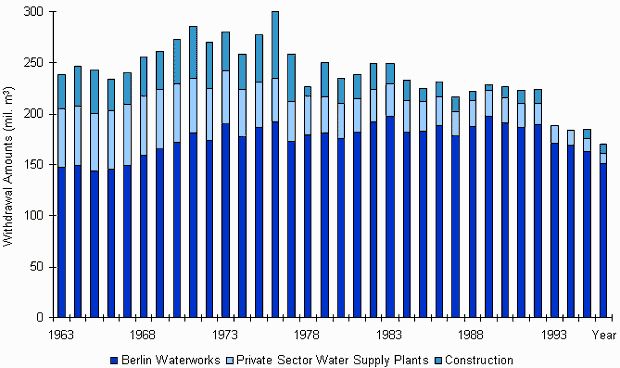 Fig. 5: Groundwater Withdrawal Amounts According to Use in West Berlin from 1963 - 1996
Image: Umweltatlas Berlin

Since 1987, construction groundwater retention for restoration and redevelopment measures have been included. The figures are for raw water withdrawals and refer to the water balance year.

The Public Water Companies established groundwater recharge plants in order to increase groundwater. These plants were necessary because precipitation and natural bank filtration from surface waters were insufficient to compensate for and balance out groundwater removals. Surface water is discharged in the vicinity of groundwater removal wells, into shallow earthern basins, ponds, or pits. This water then percolates into the groundwater. Natural percolation basins include Kuhlake in the Spandau Forest and the Grunewald chain of lakes (Grunewaldseenkette), which are located in the catchment area of withdrawal wells.

The processing facilities of the Spandau Waterwork receive surface water from the Havel river, process it mechanically and chemically, and then discharge it for percolation at Kuhlake, Kreuzgraben, and the connected channel-pond system. After lake water from the Tegeler See is processed, it is discharged through micro-sieve facilities for percolation at Baumwerder island and at Saatwinkel. The Beelitzhof Waterwork purifies Havel river water in a phosphate elimination facility for discharge into the Schlachtensee lake. This water eventually enters the Grunewald lakes. In the area of the Stolpe Waterwork, Havel river water is dammed onto Havel meadows and percolates.

Besides “true” and manmade recharged groundwater, a considerable portion of water withdrawn by the Public Water Companies comes from bank filtered water. Wells in the vicinity of surface waters produce cones of depression, and water from the bank areas of the Havel, Dahme and Spree rivers flow into them. The proportion of bank filtered water in the total withdrawal amount of each well gallery depends on the distance of the well from the surface waters. An average of 50 % of the removals of the Berlin Public Water Companies has been assumed. Figure 6 depicts the origin of waters used by the public water supply, as well as a division of its uses. Water consumption from public water supplies per inhabitant in Berlin was 188 liters/day in 1995. Water consumption of Berlin households totalled 161 mil. m3; per inhabitant 128 l/d. 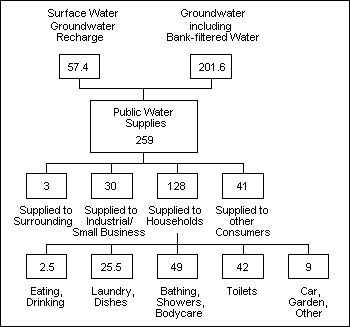 Fig. 6: Origin and Use of Water from Public Drinking Water Supplies in Berlin 1995 in million m3 per year
Image: according to AHU 1991

Increased sealing of soil surfaces and Berlin’s rising population necessitate more water conservation and new methods of recharging groundwater both to maintain groundwater balance, and avoid use of drinking water supplies from distant areas. The groundwater recharge rate could be increased by near-natural percolation of rainwater over the topsoil zone, in lowlands, for example, as long as the rainwater isn’t too polluted. Rainwater that would otherwise flow into the canalization could be separately collected and either directly discharged onto non-built-up surfaces, or discharged into artificial ponds to infiltrate the ground and percolate into groundwater. In this sense, measures to ‘de-seal’ surfaces would also contribute to an increased groundwater recharge.

In 1990, an ordinance providing for a groundwater withdrawal fee was adopted in the Berlin Water Law (Sec. 13a, Para. 1). This was intended as an economic incentive promote thrifty groundwater use. It allows Berlin to charge users a fee for the removal of groundwater, for the purpose of a more sparing use of groundwater. The resulting income should be applied to the protection of the quantity and quality of existing groundwater, particularly to ward off threats to groundwater, and to ameliorate damages.