The following indicators were included for the definition of various urban climatic zones:

In addition, the description of zones included:

The most obvious modifications of climate conditions in metropolitan areas are to be expected from temperature. This parameter seemed appropriate as the main criterion for dividing Berlin into urban climatic zones. Table 1 gives air temperatures at 16 climate stations from September through November 1999. 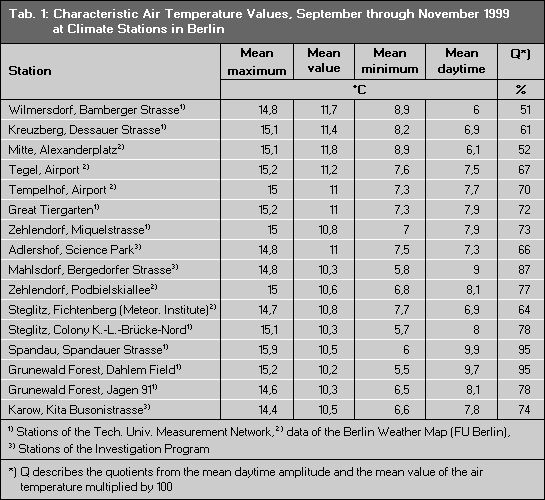 The quotient Q in Table 1 describes the average daily amplitude of average air temperature. This value is dependent upon the location of the climate stations in the urban area. Locations with high nocturnal cooling rates (such as the outer-city areas, or inner-city grassland areas) display a quotient Q of more than 85, while at stations in heavily built-up city center locations, the Q value is generally below 60. Regression analysis gives statistically significant proof for the connection between given quantities of mean annual or mean minimum temperatures and the target quantity Q. Q is thus a value well suited for the description of urban climate change.

Six climatic zones have been developed by means of the Q classification, analogous to the procedure chosen in the first edition of the Environmental Atlas (SenStadtUm 1985). A clearer overview was achieved by calculating the classification quanta for the temperature factors Mean Annual Temperature, Average Minimum Temperature and Average Daily Amplitude in the Q values, and including them in the climatic zone descriptions (see Table 2). Zone 0 describes areas unaffected by urban climate; Zones 1 through 4 show an increase in mean and average minimum air temperature and daily amplitude. The high degree of correlation between mean annual temperatures and the number of frost days (von Stülpnagel 1987) permits derivation of statements regarding the number of frost days in each zone. 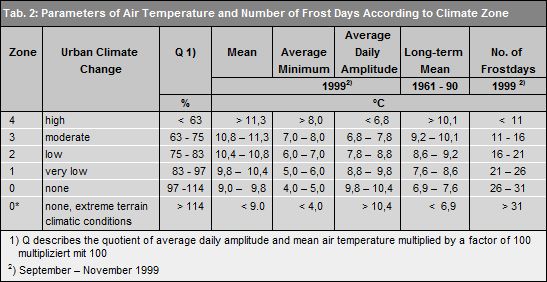 Annual mean maximum and minimum temperatures from June 1991 through May 1992 were calculated for all measuring points on the individual monitoring routes (cf. Map 04.04.4). The West Berlin measurements were taken between 1981 and 1983, and were calculated for 1991-‘92 on the basis of data from long-term climate stations. Measurements for East Berlin and the surrounding countryside were taken in 1991 or 1992. Supplementary measurements: In 1999, a total of 12 measurement trips were conducted on three routes. This resulted in 1935 test points, which were measured four times each. At the same time, the wind measurement was taken at 80 test points. Three climate stations were established especially for the check-up period. Taking into account all the time periods, 162 measurement trips with 3735 test points along 37 measurement routes, and the data of 42 measurement stations were evaluated. The measurement points were assigned to climatic zones, and point values on surfaces were interpolated.

Wind conditions proved capable of being described independent of urban climate zones. They may be classified according to use-specific factors (cf. Map 04.03). Only areas around high-rise developments and power plants are presented separately here. These areas can be assumed to have very high wind speeds and very turbulent wind conditions.