In the course of the urban development of Berlin, a multifaceted structure of buildings and open spaces has emerged. In Map 06.08, 50 differentiated section types are defined and described on the basis of their typical use, the time of their emergence and their structure of buildings and open spaces. For better readability, they have been grouped into urban structure types in Map 06.07.

The section types serve the purpose of further differentiating the use of the areas. Especially for the use type “residential”, further differentiation is required. On the one hand, areas with residential use account for more than half of the city’s built-up area, and for more than one quarter of the entire area of Berlin, so that they assume a special position; on the other, the spectrum covers a broad range of other uses in residential areas which are of particular interest, since the various urban development and environmental indicators and key quanta are highly dependent on urban structure. Here, structural age, height, density, and arrangement of the buildings in relation to one another, as well as the characteristic structure of the open spaces, are particularly important.

Knowledge of these various structural types, in connection with the actual use mapping in Maps 06.01 and 06.02 of the Environmental Atlas, constitute an essential foundation for the urban development and landscape planning investigations and development projects, both at the superordinate and the local levels. With the aid of these maps, it is also possible to derive information regarding the nature of biotope and vegetation structures, the climate situation, the consistency of the soil, the intensity of imperviousness, or the formation of new groundwater.

Development of the Urban Settlement of Berlin

Both the natural landscape and the development of urban settlement have made their mark on the urban structure of Berlin. Some remainders of the agriculturally used land, as well as landscapes characterized by water and forest, have to this day remained free of development: the forests in south-eastern Berlin between the Spree and Dahme, and, in the West, along the Havel, and also some large contiguous agricultural areas in the north-eastern part of the city. Only a few of the once numerous creeks, ditches, ponds and wetlands are still present.

The appearance of Berlin changed most markedly at the end of the previous century, as the city developed into an industrial centre. With increasing job opportunities, many people moved to Berlin, and a growing need for housing was the result. The building activity was regulated by development plans and building codes, in which the street edge lines, the sizes of the blocks, the minimum sizes of courtyards, and the heights of buildings were stipulated. Thus, Berlin’s typical dense block development with its courtyard structure emerged between 1880 and 1918 within the City Rail Circle Line. It was interspersed only by scattered decorative squares and parks, and by cemeteries.

In the then-suburbs (such as Friedenau) the building code of 1892 permitted a lesser degree of property utilization than in the inner city. In these areas, lower and somewhat more generously-dimensioned block developments emerged, with decorative features and a garden-courtyard structure, as well as villa development. 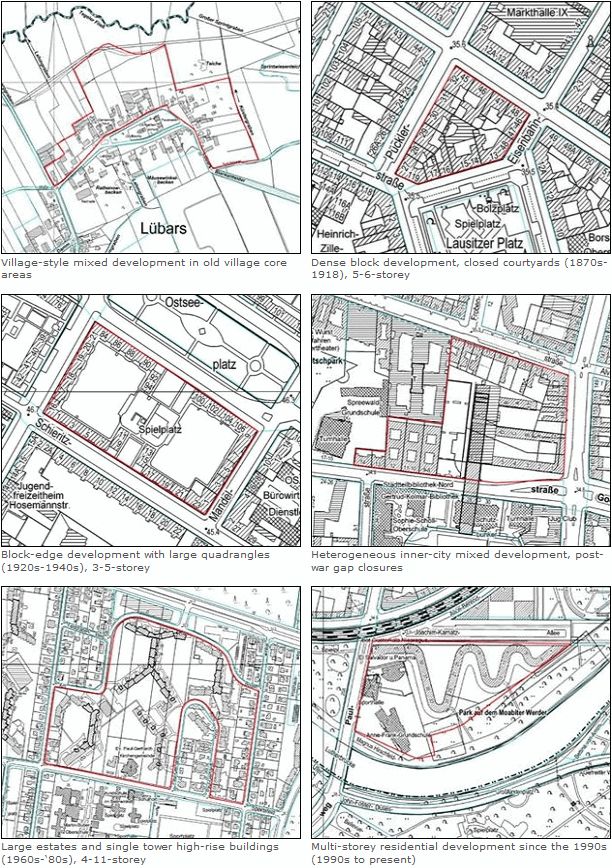 New designs developed extensively only after 1918, when the construction of wings and rear buildings was forbidden by law. At the same time, public housing construction companies took over the role of the main actors in the area of residential construction from private builders. They replaced the until-then prevalent lot-by-lot development with the construction of larger, coherent estates outside the Circle Line, in what was then the outskirts. This development was favoured by the incorporation into Berlin of its surrounding communities in 1920, to form Greater Berlin, which made uniform planning possible. Also, the open spaces associated with housing developments were accorded greater significance, which was manifested in the greater size, usefulness and design of these open spaces, but also in the designing of public open space. Later, the large public parks and allotment garden facilities emerged, which extended in a ring shape around the turn-of-the-century inner-city core. Some estates, such as the “Uncle Tom Estate” in Zehlendorf, continued to bear witness to the previous rural character of the area, with their woods and orchards.

Massive destruction during World War II and the political division of Berlin in 1948 influenced the further course of urban development. Some 30% of all buildings had been totally destroyed or severely damaged.

Changes of almost the same proportion – often with equally destructive effects on the historical plan of the city and on its structural substance – ensued during the following decades, with the often radical implementation of such plans as the “automobile-appropriate city” and “socialist urban development”.

The western part of Berlin received economic aid under the Reconstruction Programme (Marshall Plan). So that the war-time destruction could be removed quickly by large-scale building activity during the ’50s and ’60s. In the inner city, vacant lots caused by the war were closed, and whole blocks were reshaped by large-scale reconstruction and by de-coring, coupled with demolition and the construction of new buildings. The developmental goals at that time were relief of the density of inner-city development and the dispersion of municipal functions. In the outskirts, large new self-contained estates emerged with relatively high shares of open space, and with industrial areas on former open spaces between old village cores. Starting in the late ’70s, construction policy began to be concentrated on the revival of the inner city. Building activity was essentially limited to small vacant lots all over West Berlin, and on the preservation-oriented reconstruction of existing structures.

In the eastern part of Berlin, which received no economic support, but was in fact instead burdened by reparations, reconstruction began on a large scale only after construction of the Wall in 1961 and with the industrialization of the East Berlin construction industry. The emphasis during the ’60s was on the new formation of the centre of the city on areas wiped out and cleared as the result of the war. At that time, the long-term plan was to tear down the entire pre-war building stock everywhere as the inheritance of capitalism, and to replace it with developments built in the socialist architectural style. Relatively little new living space was created during the ’50s and ’60s. In 1971 therefore, the housing programme was proclaimed as the main focus of the social programme. The large-scale residential areas of Marzahn, Hellersdorf etc. were built on the outskirts of town by means of industrial prefabrication. Only later did the existing old building stock regain its significance as living space worthy of preservation; it was rehabilitated with varying degrees of intensity.

By 1992, all the concrete-plate residential estates still under construction in the eastern part of the city had been completed. In the western part, only insignificant amounts of additional construction were carried out during this period. From 1993 to 1997, construction activity involved on the one hand new suburbs at the outskirts, such as Karow-Nord, build on former farmland, and on the other, numerous major urban/capital city projects, such as the Potsdamer Platz complex, or government buildings. Moreover, other urban development projects, such as Johannistal/Adlershof or Rummelsburger Bucht, were planned and concepts were developed in order to promote the development of new urban neighbourhoods. Due to changed business conditions and development policies, some original development goals were modified, and the structural dimensions considerably reduced. Since 1997, new housing construction has been declining in the entire metropolitan area, and by 2000 had dropped back to the level of 1991, due to the reduction of subsidies; since then it has stagnated at a low level. In place of major construction projects, the first years of the 21st century saw the closing of scattered gaps, the expansion of existing structures, and the densification of already developed areas, especially in the inner city. This involved primarily buildings with large condominiums, as well as single-family homes and duplexes. New housing construction was largely concentrated in the former East Berlin boroughs of Weißensee, Pankow, Treptow, Köpenick and Hellersdorf, where densification was carried out in existing loosely built estates (cf. FNP Report 2009). Moreover, large parts of the city centre with old buildings, especially in the eastern part of the city, have been reconstructed with the aid of various urban reconstruction and urban renewal subsidy programmes, which has involved both the building structures and the residential environment. The same is true of more than 80 % of the concrete plate-type estates.

Open spaces along the old Berlin Wall corridor, and abandoned railway grounds which, in the course of the decades of the division of the city, have in some cases developed into valuable segments of the natural habitat and open space system, have since reunification in some cases been re-dedicated as green spaces or memorial areas, and have thus become established as typical parts of Berlin’s structure of open spaces (e.g. the North Station, Gleisdreieck, Südgelände, the Berlin Wall Park, or the Bernauer Straße Berlin Wall Memorial.