The combined bio-climate model was run with the values for background load and sunny day percentages from Tables 7 and 8. Based on an initial status quo of use distribution and factors of influence, such as soil sealing, extent of greening, etc., a case example is used to demonstrate how possible land use changes, which are to be expected over such a long observation period, could become a factor of additional impact.

Using the real use data of the project area (see Statistical Base), the distribution of the Perceived Temperature as it would typically develop on the afternoon of a low-wind cloudless summer day was first calculated (Fig. 8).

The differences between the various uses and urban structures are clearly apparent. The increase in thermal load towards the densely built-up inner city is notable. The Großer Tiergarten, a central park area, stands out strikingly in the urban centre, however. There, a Perceived Temperature of approx. 5°C lower than in the inner city breaks up the structure of the thermal load. Often, in summer, the adjacent built-up area may already suffer under thermal load, but it is still possible to escape to cooler surroundings here. Other large open areas such as Britzer Garten, Südgelände or Treptower Park also fulfil comparable functions. On the other hand, the open space of the former inner-city airport at Tempelhof shows increased temperature values, due to lacking shade from trees and unhindered sunshine onto the meadow areas during the whole day; moreover, compared with normal parks, the area has a much reduced degree of cooling through evaporation. Fig. 8: Perceived Temperature in °C on the afternoon of a low-wind, cloudless summer day in Berlin and the surrounding area
Image: Umweltatlas Berlin

Using the modelling of this typical specific situation as the point of departure, an assessment of the long-term current situation for the 30-year period from 1971 – 2000 was carried out by the inclusion of values for the background load with the aid of the combined urban bio-climate model.

The combined bio-climate model was run on REMO data, using the values for background load and sunny day percentages from Tables 7 and 8. Land use changes were not taken into account.

Figure 9 shows that the thermal load has already been intensifying, particularly in the areas already most frequently subject to thermal load. While in the surrounding countryside, according to both modelruns, thermal load is expected to become about 50% more frequent by the middle of the century, with 3 – 5 more days, more than seven additional thermal load days are expected in the densely built-up inner city. For the purpose of comparison, the model was also run using WettReg data; in this case (see Fig. 9), the difference between the city and the surrounding countryside is even slightly greater, which can mainly be put down to a slightly stronger increase in sunny days. At the same time, the changes in the large non-built-up inner city areas are in both cases roughly the same as those in the surrounding areas. 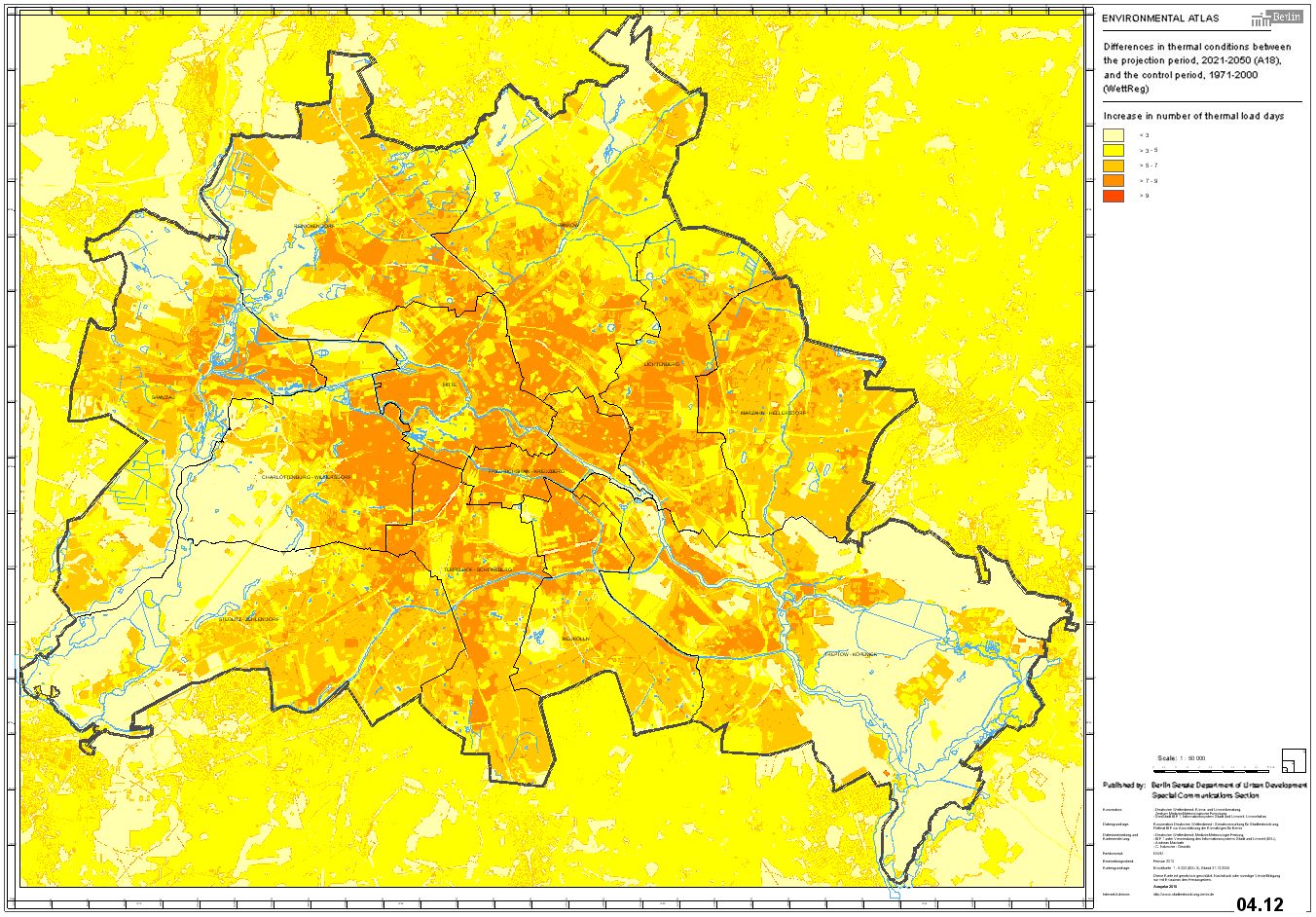 The projected development of the future thermal picture shows that the number of thermal load days will rise considerably in the second half of the century.

The results of both REMO and WettReg runs (see Fig. 10), reveal that an increase of 25 days and sometimes more in the inner city, or an increase of approx. 150% as compared with the status quo is to be expected. Even for the less built-up areas on the outskirts of the city and in large green spaces, including woodlands, a doubling of load days is projected.

Clearly, the global effect of climate change will have a considerable impact in all urban areas by this time, if not before, unless adequate measures are initiated in a timely manner to reduce these effects. 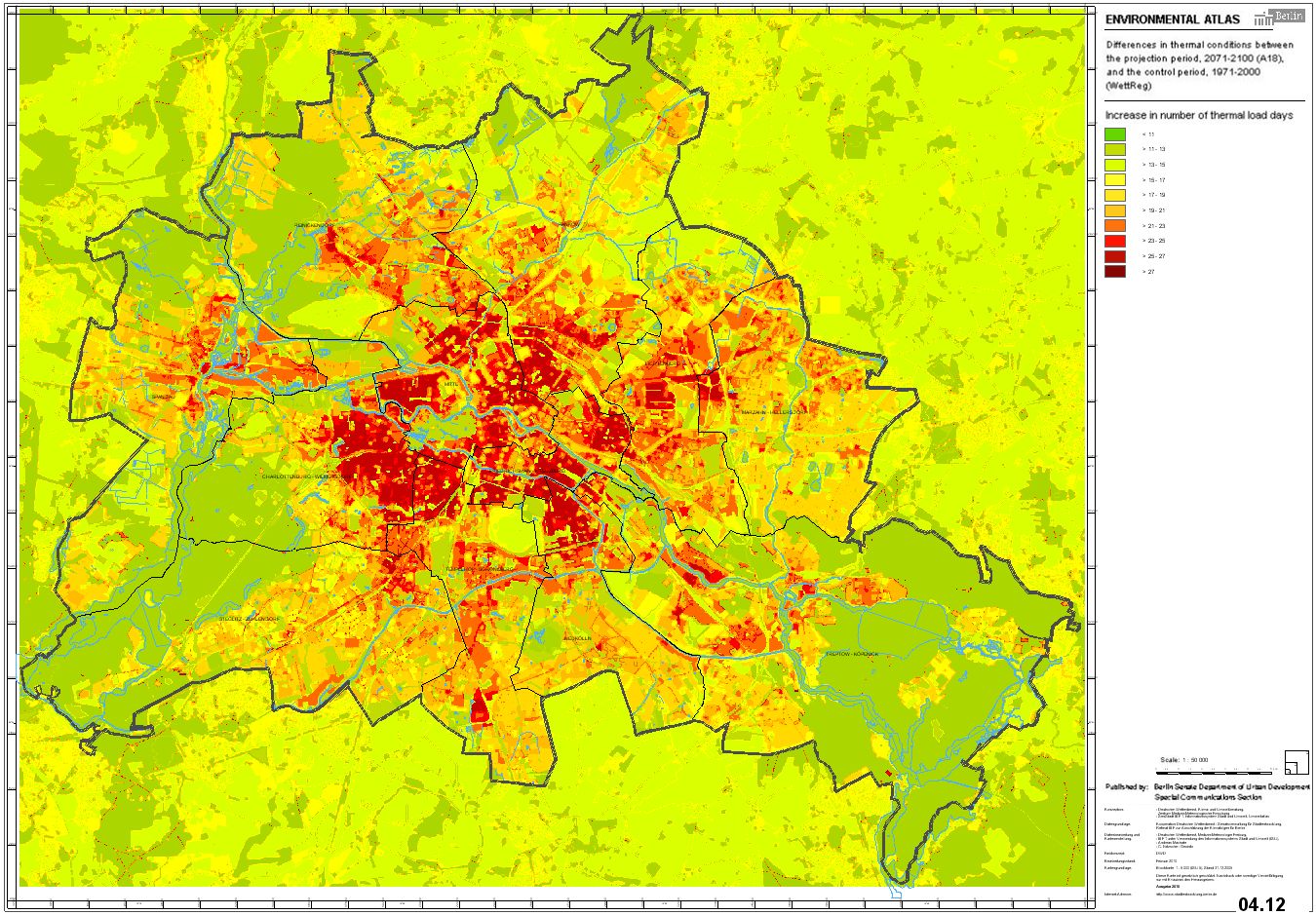 The additional effects of possible land use changes, which are not addressed in the projections presented so far, are illustrated by the example shown in Fig. 11. This is not a “play-through” of a real situation, but rather the demonstration of the additional – but possibly also mitigating – effects of planning measures.

The left part of the figure shows how the effect of the global temperature increase can be counteracted by the transformation of an area hitherto containing buildings into a park. By contrast, the portions of the map shown in various shades of red show a simulation of the effects of possible construction projects of various densities on areas hitherto used as green space or as farmland.

In such areas the threshold of strong thermal load would be exceeded 1.5 times more frequently than today by the middle of the century; such values would otherwise be expected only in the last third of the century. 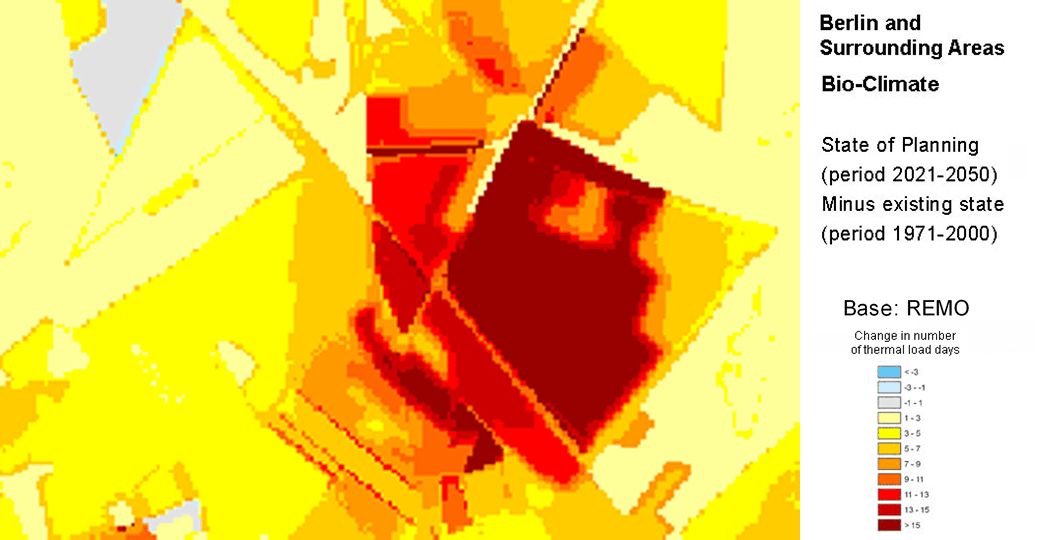 Fig. 11: Change in the number of thermal load days due to area use changes (buildings) and global climate change per year for the 2021 - 2050 projection period, compared with the control series, 1971 - 2000, based on a REMO data (case example).
Image: Umweltatlas Berlin

As referred to above, interpretation of model outputs is subject to technical limitations imposed by the wide range of possible emission scenarios, the pilot nature of the study and various other factors of influence on the future climate not to be foreseen yet. Nevertheless, the results of this cooperative effort with the DWD provide essential support for the efforts which the responsible authorities in the Berlin Senate are making to develop necessary measures of adjustment to climate impacts that are already inevitable. In addition, they represent an important source of information for the interested public.