Traffic still represents a crucial load factor of the urban environment. Its numerical development is observed through traffic counts that have been carried out at regular intervals since 1951 in the western boroughs of Berlin and since 1993 for the entire city area. The Berlin Traffic Control (Verkehrsleitung Berlin, VLB) of the Senate Department for the Environment, Transport and Climate Protection is responsible for carrying out traffic counts on motorways, federal highways and the remaining main road network. The current data refer to the year 2014 and thus update the values of the preceding analysis from 2009. 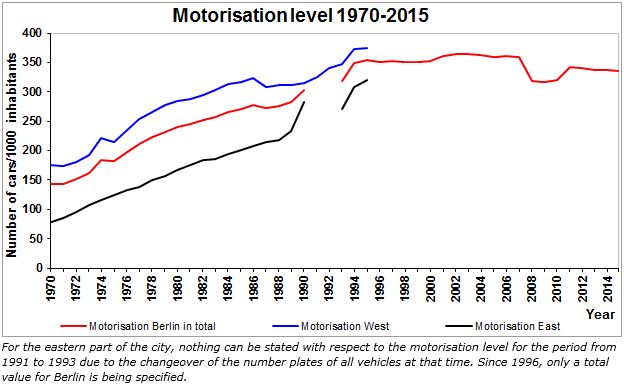 The following overviews compare the annual numbers of the important parameters route length and driving performance according to traffic load classes with respect to the development from 1993 to 2014.

Due to the variations in the route lengths of the individual reference years, the comparability is limited. It remains noteworthy that, despite a continually increased extent of routes attributed to the main road network, the absolute level of the calculated daily driving performance of all sections has slightly declined, as has the proportion of route sections experiencing high loads (average daily traffic volume (ADT) > 50,000 motor vehicles).