Leipziger Straße (street) and the new residence units on Wilhelmstraße are densely populated and are conspicuous exceptions to general conditions in the city center.

An interesting development can be observed at the eastern city border in comparison to the meanwhile nearly 20 years old map of the population density in 1994. Because of divisions of real estates and in the consequence constructional compressions the predominant number of blocks are nowadays in the density category of 31-70 p/ha, whereas for the data from 1994/31/12 blocks with less than 30 p/ha are in the majority. Therefore as a result of this development in the field of population density the eastern border of Berlin bears resemblance to the western border. 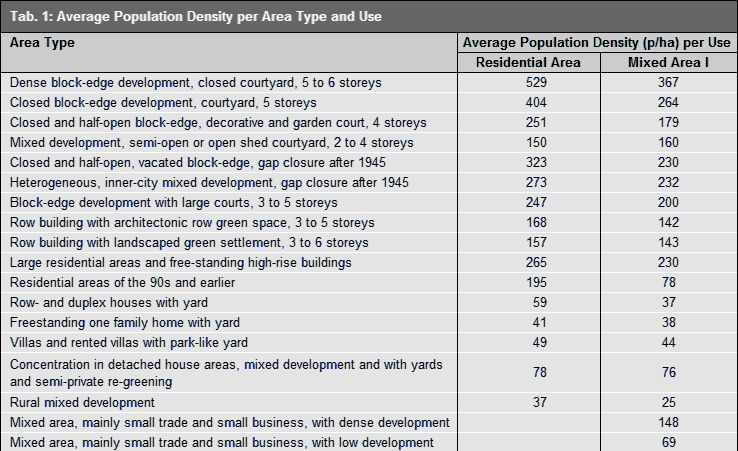 For blocks with non-uniform use the population density is displayed very detailed in block segments with uniform use – and this is an important progress in comparison to the first edition of this map.
Instancing the block north of the Innsbrucker Platz along the Hauptstraße in the Schöneberg borough at the corner of Belziger Straße and Dominicusstraße has several block segments, amongst others a park of 5,4 ha. Therefore the population density – broken down into the other block segments – producing a doubling of the density value from 1994 with 88 p/ha for the whole block.