All information about actual land use is managed and processed at the ISU (Informationssystem Stadt und Umwelt: Urban and Environmental Information System). This makes possible a graphic data processing of the factual data on basis of a uniform spatial reference system.

The spatial reference system (edition 2007) is provided by the digital map of Berlin in a scale 1:5,000 – the ISU5 of the ISU (Urban and Environmental Information System). This map differs from former editions based on ISU50 (generalized map for the scale 1:50 000) by its higher accuracy due to its scale of 1:5000. It shows each individual statistical block, which is as a rule delimited by streets like in the ISU50. The numbering and limitation of the blocks are carried by the State Statistical Office (Statistisches Landesamt).

The smallest reference segment is formed by the block segments, which were delimited for different land use within a statistical block.

The uniform reference system makes possible a clear spatial identification of all factual data. Over a common key, which contains, among other things, borough, block and block segment numbers, these data are assigned to the spatial reference system.

The update of the edition 2008 was implemented by an external contractor by means of aerial photography and personal area inspections. Changes of land use between 2001 and 2005 were mapped. Adaptations of geometries and actual block numbers from the department of statistics (Amt für Statistik Berlin-Brandenburg) were made.

Categories of the Map 06.01 ”Actual Use of Built-up Areas”

The methodology for building the categories of uses is portrayed in detail in the text of the edition 1995 in the chapter Methodology.

The categories residential areas, mixed areas, core area and small-business/ industrial area are defined by the ratio between housing and business/industry (cf. Tab. 1). 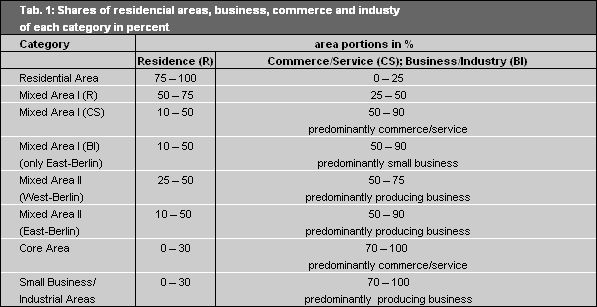 Residential Areas are characterized by housing and by the infrastructure required for living, such as shopping possibilities and service enterprises (laundries, restaurants, schools, etc.). The housing share in terms of floor-space is dominant, constituting 75-100%, compared with commercial, service and small business use. Residential areas include both the dense inner city development and the open settlement development at the edge of the city (cf. Map 06.07, SenStadtUm 2004).

The Mixed Area I areas are similar to the residential areas in appearance. However, the housing is more strongly interspersed with commercial and service enterprises (department stores, offices, etc.) and small businesses in lofts and courtyards. As a rule, housing predominates, with a share as high as 75%, but it may drop as low as 10%, with the rest being commercial and service enterprises and small businesses. The negative impact of this commercial use on neighboring residences is overall minimal. Large tour-restaurants in recreational areas have also been assigned to this category.

The Mixed Area II category is characterized by a high share of production-related enterprise, with the corresponding building complexes and warehouse/ storage areas. A third of the area, and no more than half, is generally used for housing; in East Berlin, this can drop to 10%. The appearance is that of a small business area. Major inconvenience for residents due to noise and emissions can be assumed.

In Core Areas, the office and business centers of commercial and service enterprises predominate, with 70-100% of the space. The residential share is very low, 30% at a maximum. Business and shopping streets are as a rule not categorized as core areas, since, for reasons of visual representation, entire blocks and not single streets along a block, were used as the basis for assignment to use categories (e.g., Wilmersdorfer Strasse). Especially in the Borough of Mitte, public, largely federal administrative buildings, embassies and other comparably-used building, which are as a rule assigned to the category “Public Facilities,” may be assigned to the category “Core Areas,” since these facilities are marked as core areas on the land use map of that borough (cf. the category “Public Facilities”).

Sites of the category Public Facilities Areas include cultural, university and research, health care, administrative, postal and law-enforcement facilities, and also day care centers, playgrounds, schools, sports facilities, youth centers and retirement homes, and religious institutions such as churches. Special Use Areas are built-up areas with a specific purpose, such as the Olympic Stadium and the Messegelaende (trade fair complex).

The sites of the category Utilities Areas include power, gas, water and sewage-treatment plants, facilities of the sanitation department and the public transportation system, including railway stations and port facilities, central market halls (the Central Market, the Flower Market, the slaughterhouse) and other service facilities, such as broadcasting facilities.

The Traffic Areas include the areas required for truck and rail service, other than public roadways. Traffic islands and airports also count as Traffic Areas. Parking lots and parking garages are only recorded as Traffic Areas if they occupy an entire block. Parking lots which exceed the minimum ascertainment limit of 1 ha, but which are within one statistical block, and connected with other uses, such as residential areas, have not been delimited through the definition of a corresponding segment formation, but have rather been assigned to the dominant use category. The category “Traffic Area” also includes track-beds and railyards of the city and long-distance railways, and also those portions of the subway running outside the tunnels in open right-of-ways or as elevated railways, and also streetcar-related areas. Median strips are assigned to the “Traffic Area” category if their use justifies their categorization as motor-vehicle parking. Freight yards and commercial facilities on railway land are not classified as Traffic Areas (cf. the category “Small Business Areas”).

The Weekend Cottage Areas differ hardly at all in appearance from the Allotment-Garden or Residential Area. Those areas assigned to this category in the 1985 Umweltatlas were retained; for the eastern boroughs, areas were assigned to the category “Weekend Cottage Area” only if they were neither residential nor allotment-garden areas (cf. also use category “Allotment Gardens” in Map 06.02, “Inventory of Green and Open Spaces”).

Areas classified as Construction Site were those with a typical construction site character: as a rule open areas with soil disturbed by construction vehicles. Often, the foundations or the first stories are recognizable.

Categories of the Map 06.02 ”Inventory of Green and Open Spaces”

The category Forest includes all wooded areas of the Berlin forests, as well as those wooded stands outside the Berlin forests which appear clearly in aerial photography as self-contained forest stands. The forests include reforested former sewage farms.

Bodies of Water include all natural bodies of water – rivers, lakes, ponds – and also canals and reservoirs belonging to the Berlin Water Authority.

The category Meadows and Pastures includes meadows, pastures and enclosures used for agricultural purposes, and also experimental areas used by the universities for similar purposes, and former sewage fields.

Farmland includes areas identified in aerial photography as being used for agricultural purposes. The difference from “Meadows and Pastures” is that in this case, the land is periodically sown, fertilized and harvested.

Parks or Green Spaces include those facilities listed in the SenStadt Directory of Green Spaces, other city squares with a sealing level of less than 30%, and median strips used as green spaces. In addition, playgrounds, the Botanical Garden, the Zoos in Tiergarten and Friedrichsfelde, the Charlottenburg Palace Gardens, and similar facilities were assigned to the category “Parks/Green Spaces.” Green spaces around public facilities such as hospitals were not marked separately.

City Squares and Promenades serve as places of leisure for free time and recreation, as places of assembly, markets, etc. They generally have the word “Platz” (square) in their names, i.e., Alexanderplatz. They are defined differently from green spaces due to their high degree of sealing, which is 30% or more for both city squares and promenades. Promenades also include median strips with sealing levels of over 30%, unless they are used as parking lots.

Vacant Areas are areas currently not used or cared for, on which variegated stands of vegetation can develop. Sand beaches and other non-vegetation-filled areas also belong to this category. In addition, a few artificial rain catchments, ditches, landfills and wet areas are assigned to this category.

The category Campgrounds includes areas used for occasional residence in mobile shelters, such as tents, trailers and campers. These include both tent camps and permanent campgrounds.

The category Tree Nursery/Horticulture includes, gardening schools, and the planting fields of private tree nurseries and market gardens, except for those areas marked as having solely greenhouse cultivation.

Maps 06.01 “Actual Use of Built-up Areas,” and 06.02 “Inventory of Green and Open Spaces” fit together to provide a comprehensive representation of actual land use. Overlapping occurs with “Public Facility” and “Special Use” Sites, with “Utilities Areas”, with “Small Business Areas” and “Industrial Areas” and with “Traffic Areas”. Areas of these categories are in some cases represented on Map 06.02 “Inventory of Green and Open Spaces,” if their character, regardless of their use, is more like that of a green or open space. A sports facility for example, would be represented on Map 06.01 as a Public Facility, and on Map 06.02 as a “Sports Facility”; a median strip might simultaneously be shown as a “Traffic Area” (Map 06.01) and as a “Vacant Area” (Map 06.02). Churches on city squares are shown on Map 06.01 as “Public Facilities” and in Map 06.02 as “Parks/Green Spaces” or as “City Squares/Promenades”, depending on their degree of sealing.