The present map, like the map from the 1985 Environmental Atlas, refers only to the main tree layer, and, to the extent available, to residual and/or seed-tree stands.

Seed-trees are trees, usually individuals, which are of an age greater than that of the main tree layer. Residual stands are trees of another tree species, which occur only in isolation in the main tree layer. Both serve mostly as seed providers for the natural new generation. The layer of young trees which do not yet constitute stands are called undergrowth. With near-natural forestry, they should arise mainly from the natural regeneration (e.g., through seeding from the seed trees). A change in species composition can first be ascertained In the undergrowth, as the first successes of 14 years of near-natural forestry show. This layer is not shown on the map for technical reasons. Also, the herbaceous layer is not shown, because it is not ascertained during the forestry stocktaking.

In contrast to the 1985 Environmental Atlas, the tree species are divided into florally foreign and florally appropriate species and/or species groups. For the formation a near-natural forest, only site-appropriate and florally appropriate tree species should be introduced. In the Berlin area, pine and oak are the major domestic species. The soft-wood deciduous moist-site trees, such as alder, ash, poplar and willow, are included in a class, as are such precious-wood species as elm, linden, hornbeam, maple, aspen, chestnut and mountain ash, which occur in the Berlin forests traditionally as mixed-stand tree species. An example of a florally foreign (i.e. not domestic), but site-appropriate species is the durmast oak. The Douglas fir can be considered florally-foreign and site-inappropriate. It was introduced because of its fast growth; however, it cannot regenerate under Berlin site and climatic conditions. As a result of the new break-down and the changed legend in the Environmental Atlas, the red oak was, for instance, removed from the class of oaks and added to the class of a florally foreign tree species (cf. Tab. 3 and Tab. 10). A contrast of the old and the new legends in Table 3 elucidates the changes. 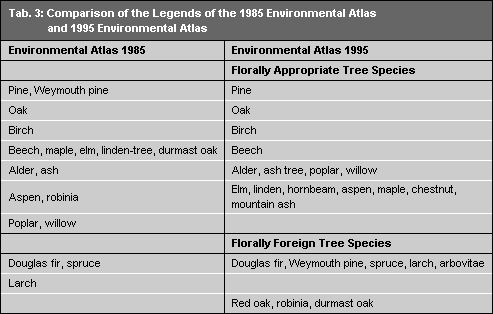 The representation of the age structure is shown according to three age classes (A.Cl.):

By contrast to the 1985 Environmental Atlas, the subsidiary tree species, too, are shown in this map according to their respective age class.

In order to bring together the mass of the existing information into a format readable in a map, the data evaluation was undertaken according to the following criteria: 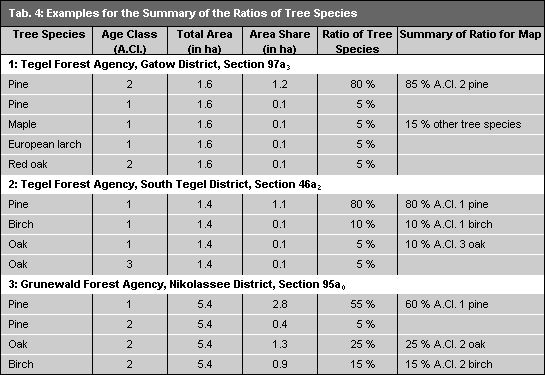 Tab. 4: Examples for the Summary of the Ratios of Tree Species
Image: Umweltatlas Berlin

The ratio of the tree species at a given position in the forest could not be taken directly from the Waldfonds data base, but had to be calculated separately (cf. Tab. 5).

Tab. 5: Example from the Available Data (Buch District) for the Calculation of the Ratio of Tree Species
Image: Umweltatlas Berlin

The survey of the West Berlin Forsteinrichtung distinguishes according to stands, which, however, are not delimited spatially on the corresponding map. So the respectively occurring species were grouped together on a subsection or segment level and the ratio was calculated anew. For the example area (cf. Tab. 6), four stocks and reference sizes were distinguished to obtain ratios, which, however, are all referenced to Section 67 a in terms of total area. The occurrence of the species was summed accordingly for display on the map. 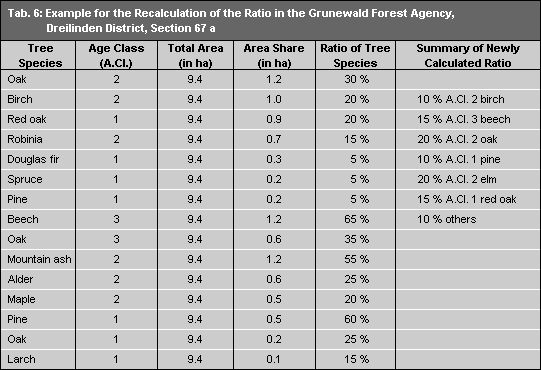 Tab. 6: Example for the Recalculation of the Ratio in the Grunewald Forest Agency, Dreilinden District, Section 67a
Image: Umweltatlas Berlin

With the exception of some federal forest areas, only those areas are shown which belong to the Berlin Forests and are used as forests. This includes also non-wooded areas which are property of the forests, but not forested. In cooperation with the State Forestry Agency, these have been included if they display a forest-like character (e.g. nature reserves in the forest).