The term population density is a measure of how many people live in a given area. Population density as used here is the number of inhabitants per hectare (1 hectare is an area about 86 yards on a side. 1 hectare = 2.47 acres, or 1 acre = 0.4047 hectare. 640 acres = 1 sq. mile). The population density of Berlin’s entire urban area is 42 people/hectare (p/ha). This figure is in the middle range for German and European cities. Hamburg has an average of 39 % fewer people per hectare. In the inner city of Paris, the population density on the same area is almost twice as high. As the city of Paris developed, however, within a limited area of around 105 km2, these numbers are only somewhat comparable (cf. Fig. 1). 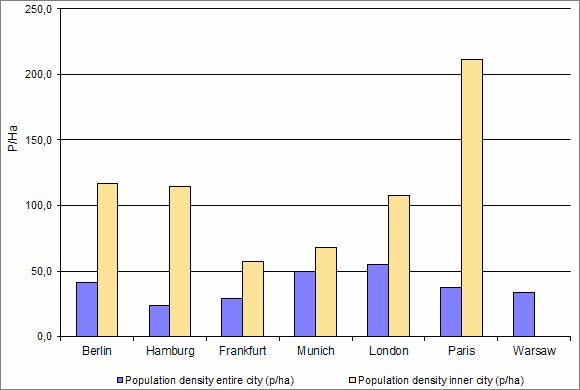 Fig. 1: Population density of Berlin compared to other cities, in people per hectare (data from 2013-2016)
Image: Umweltatlas Berlin

The population density of Berlin’s inner-city, i.e. within the so-called City Rail Circle Line (S-Bahn-Ring), lies above average at 117 p/ha and even exceeds that of London.

The Map of Population Density depicts population density in terms of statistical blocks or block segments (cf. Methodology). Therefore, this presentation is directly comparable to the previous edition from 2018.

High population density causes great environmental stresses, especially in close proximity to the road, such as noise and air pollution caused by traffic. Residents frequent public green areas for relaxation. These areas are, however, heavily visited, often overused, and loud. Private green areas exist only to a limited extent. Some densely populated areas of Berlin are attractive residential areas in spite of this. Some block-style constructions from the Wilhelminian period are especially attractive when they have living quarters of generous size, and are complemented by a good infrastructure of small businesses, restaurants, cultural facilities, services, and an extensive public transportation system. Rich urban life flourishes here. This urbanity is missed by many living in the purely residential areas at the edge of the city. These areas have a relatively low population density, a high ratio of open space, and less air and noise pollution.

The inner city boroughs of Mitte, Tiergarten, Wedding, Prenzlauer Berg, Friedrichshain and Kreuzberg reached their greatest population density in 1910 with 312 p/ha. Today, the population density of these boroughs has dropped to 118 p/ha, one-third of the peak value (cf. Fig. 2). 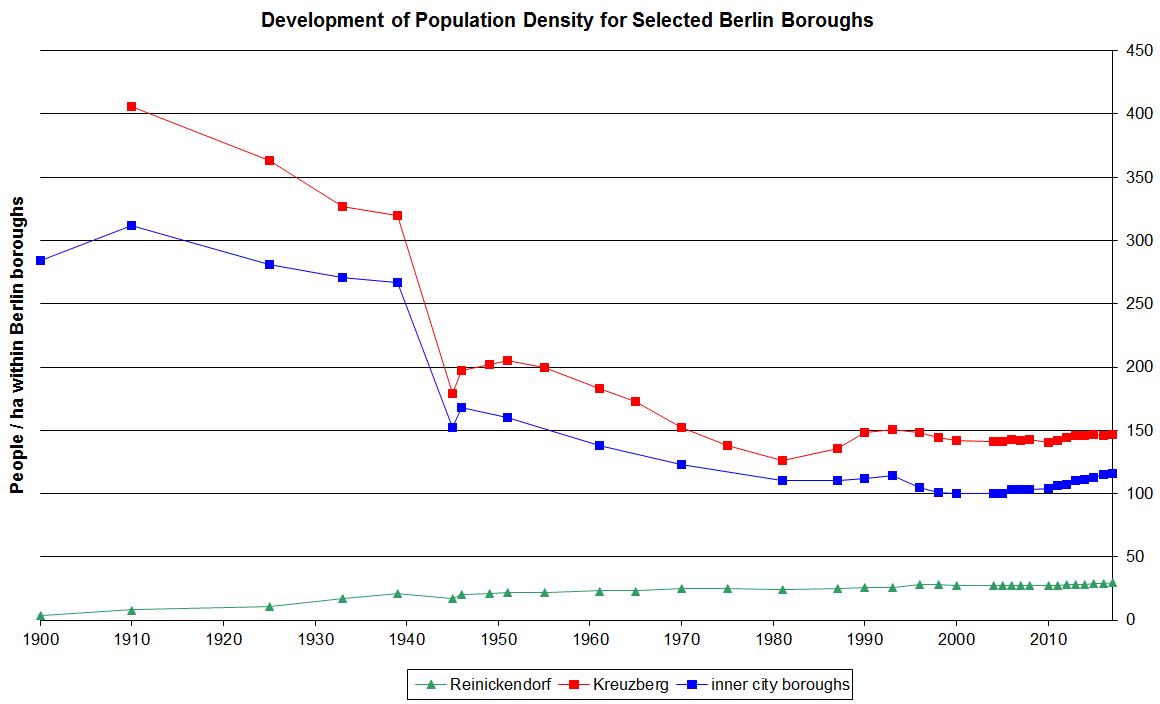 In contrast, the population in the outer boroughs rose continuously, except for a general drop in 1945, caused by war-time conditions.

While in 1996 a continuous growth in population of up to 300,000 people was expected by 2010, a more complex development took place: After a peak in 1993 with nearly 3.48 Million inhabitants, the number decreased to 3.38 Million in 2000. Since then, the number has increased quite continuously to 3.75 Million inhabitants (relating to mandatorily registered residents who have stated Berlin to be their main place of residence, as of December 31, 2018, Statistical Office of Berlin-Brandenburg, only in German).

Lower population density results not only from high proportions of green and open spaces and lesser degrees of development. Lower density can also be due to a large amount of small business, trade and service use, as well as public facilities, etc. These property areas are included in calculations of population density, as long as they are not separated in an own block segment.

Detailed and current data bases of population density in specific urban areas are useful for the planning of various public departments. The Department of Urban Planning, for example, uses these figures as a basis for planning such infrastructure facilities as schools, businesses and playgrounds. Landscape Planning uses these figures for analyzing the number and accessibility of green spaces near to residential areas (cf. Map 06.05, SenStadt 2017a). Knowledge of population density also allows conclusions to be drawn regarding environmental stresses, such as calculating the number of persons exposed to road traffic noise in their dwellings as part of the analysis of the Strategic Noise Maps (cf. Map 07.05, SenStadtUm 2017b).