The groundwater temperature in the Berlin metropolitan area is permanently anthropogenically influenced.

The temperature measurements of the near-surface groundwater of the State of Berlin carried out since the 1980s show that the average temperature has increased to a level more than 4°C above that in the thinly populated surrounding areas outside the city. They also indicate that this temperature rise is increasingly apparent even at depths greater than 20 m. 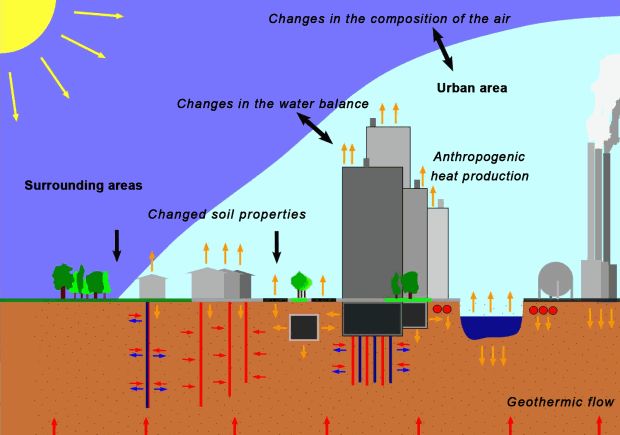 The causes of the temperature rise are various, and are directly connected to the continuing structural developments and the existing uses at the earth’s surface. There, the distinction is made between direct and indirect influences on the groundwater temperature (see Fig. 1).

These differences cause changes in the heat balance by comparison with the areas surrounding the city.

The city is gradually heating itself up, storing ever more heat overall, and gradually passing it on again to the surrounding areas, i.e., it can generally be considered a huge heat storage unit. Over the long term, this process leads to an increase in the annual mean air temperatures (cf. Map of long-term mean air temperatures, 1961-‘90; Map 04.02).

One hundred percent of Berlin’s drinking water comes from groundwater, which is extracted almost exclusively from the territory of the State of Berlin. The groundwater also supplies a large share of the water for industrial use. Therefore, the protection of the groundwater from serious change, such as a significant increase in groundwater temperature, is of great importance – especially in the interests of sustainable water management.

Since 1978, temperature profiles have increasingly been recorded at deep groundwater measurement points distributed throughout the area of the city, in order to ascertain and observe changes.

In addition, it can, in combination with other topical maps, such as the Geological Outline Map (Map 01.17), the Groundwater Levels and Catchment Areas Map (Map 02.12), or the Geothermal Potential Map (Map 02.18), be used as an aid for decision-making and for preliminary planning for energy management of the groundwater. The underground temperature is an important quantity for the installation of ground heat exchangers.

The major heat source for the near-surface subsoil to a depth of approx. 20 m is the solar irradiance which reaches the earth’s surface. This is substantially responsible for the surface temperature.

The near-surface soil is heated by irradiated solar energy, and passes the heat on to the atmosphere and to the subsoil. The annual total of that part of the solar irradiance which impacts upon a horizontal surface, the so-called global irradiance, averages approx. 1000 kWh per sq. m and year in the State of Berlin. A number of parameters at the air-surface interface affect the local thermic climate. Colour, composition, surface roughness, degree of ground cover, the water balance and the orientation of solar irradiation upon urban surfaces determine how much energy is absorbed and "stored" in the building structures, and how much of that is passed on to the atmosphere or the subsoil.

Basically, the temperatures of the earth’s surface, and hence, too, the heat entry or exit, are subject to periodic fluctuation in a cycle of one year, which corresponds to the progression of the seasons.

The surface temperature penetrates the soil with decreasing intensity. The penetration depth and the speed with which the heat is transported depend on the heat transfer capacity of the soil.

While convective heat transfer involves the movement of the heat via moving medium, such as groundwater or seepage water, conductive transfer results from the transmission of energy through the successive impact of molecules.

Compared with solar irradiance, the main heat source for the near-surface area, the geothermal flow caused by the decay of radioactive isotopes in the subsoil is of much less importance.

In the continental crust of the earth, the geothermal flow density, which is defined as the thermal flow per unit of area perpendicular to the standard area, varies regionally. According to Hurtig & Oelsner (1979), and Honarmand & Völker (1999), the mean thermal flow density in the State of Berlin is between approx. 80 and 90 mW/sq. m. Based on this, an energy total of between 0.7 and 0.8 kWh per sq. m and year can be calculated, which is only approx. 1/1000 of the global irradiance.

The near-surface groundwater temperature is essentially determined by the exchange of heat between the sun, the earth’s surface and the atmosphere, and to a much lesser degree by the geothermal flow towards the surface.

The regional average annual temperature at the surface in Berlin, given no anthropogenic effects, is approx. 8.0 to 8.5°C.

While the daily fluctuations affect the soil only to a depth of approx. 1.0 m, the seasonal fluctuations reach depths of between 15 and a maximum of 25 m. Below this depth, in the so-called neutral zone, where seasonal effects can no longer be ascertained, the temperatures rises depending on the heat transfer capability of the rock and the regional geothermal flow density (Fig. 2). 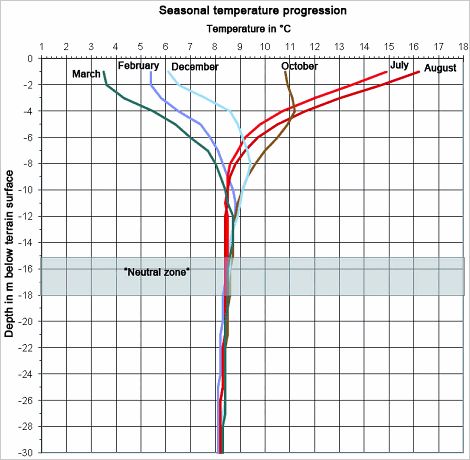 The Warsaw-Berlin glacial spillway runs in a nearly east-westerly direction, separating the Barnim Plateau in the north of the city from the Teltow Plateau and the Nauen Plate in the south (Fig. 3). The terrain elevation of the spillway is 30 to 40 m above sea level, while the plateaus average 40-60 m above sea level. Several elevations rise to over 100 meters above sea level (cf. Map of Terrain Elevations, Map 01.08). 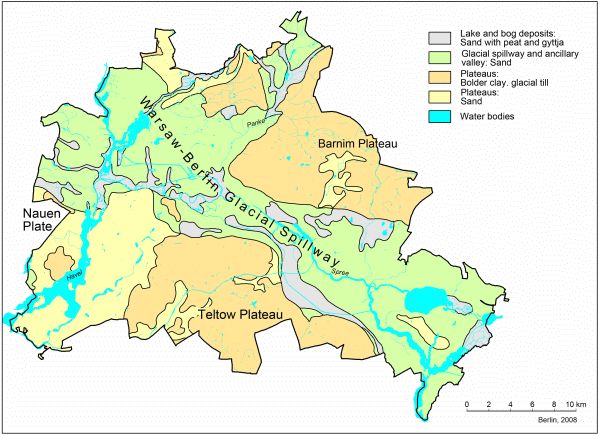 In Berlin, the pore space in the upper 150-200 m of the predominantly sandy and gravelly sediments is completely filled until just below the surface with groundwater, which is used as the drinking water supply for the city. The depth to groundwater fluctuates depending on the morphology and geology, between 0 m and a few meters in the glacial spillway, and from five to over 30 m on the plateaus (cf. Map 02.07, Depth to Groundwater).

Groundwater removal for the extraction of drinking and industrial water has led to the formation of broad funnel-shaped depressions in the groundwater surface. This changes the natural depth and flow velocity of the groundwater, as well as its natural flow direction. For that reason influent conditions have been created in the areas where well galleries extract groundwater near rivers and lakes, which means that the surface water infiltrates as bank filtrate into the groundwater. Since the surface water is in addition warmed throughout the year, e.g. in the area of the Spree, by the intake of cooling water from of heating and power stations, this infiltration necessarily causes heating of the groundwater in the watershed area of such surface bodies of water.

A simplified view of the city allows the following rough categories (Fig. 4): 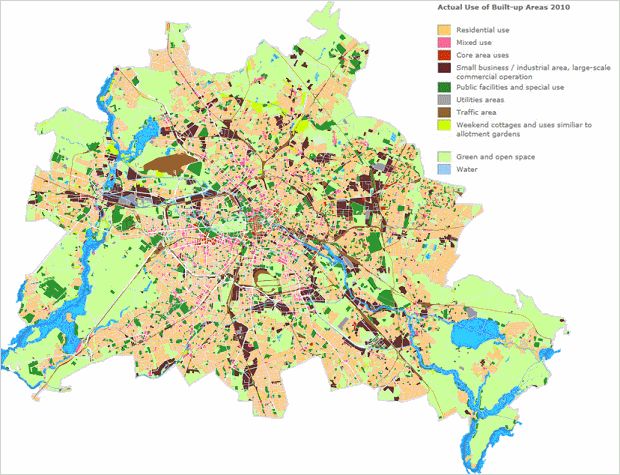 A look at the local climatic situation in Berlin reveals first and foremost that the structurally high-density city centre shows profound temperature changes compared with surrounding areas. Thus, the Map of Long-Term Mean Air Temperatures (Map 04.02) shows that the long-term mean air temperature from 1961-1990 in the north-eastern outlying neighbourhood of Buch was between 7.0 and 7.5°C, while the average temperature in the city centre had already risen to above 10.5°C.