Map 04.06.1: Surface Temperatures in the Evening

Overflights took place at time periods of progressive cooling at different stages; the degree of cooling depended on the thermal behavior of individual objects. The first optical impression of the evening overflights is given by the coolest locations in the blue-purple spectrum. These areas are almost all at the edge of and outside the city, except for a few locations in the city center. They are mainly areas typical of the Berlin area, such as large farmlands and sewage farms, former and current. They form a ring around the city, although some are within the city, such as Karolinenhöhe in the west, and Lübars – Blankenfelde – Wartenberg in the northeast. Smaller, very cool and clearly defined areas include the farmlands of the Johannisstift in Spandau, Jagen 94 in Grunewald, the vacant areas southeast of Müggelsee Lake and the vacant areas of the airports. Among the quickly cooling areas west of the city is the Döberitz Heath, especially its hollows. The thermal behavior of these areas is not usually changed significantly by relief influences, in contrast to forested areas.

A size of at least several hectares and quick, high energy turnovers in the soil/air boundary layer are of prime importance for these areas named above. Neighboring structures exert no, or hardly any, influence. The dry soil allows only a minimal heat conductance. This isolating effect is most clearly seen in sandy soil with especially high air content. Bogs, in contrast, have a lesser rate of cooling, similar to the heat storage effects of large water areas. A similar behavior can be expected for the flooded areas of active sewage farms.

These locations are efficient “cold air production areas”; but they are especially emission-endangered from the air stagnation that develops during the night. The degree to which their equalizing effects can act on the climate-stressed areas of Berlin depends on the influence of emittents, and the spatial relationship to the stressed area.

The occasional large-areas of flat metal-roof complexes have to be considered separately; such as the Kanalstraße and Gradestraße in the Neukölln borough, around the Eichbornstraße area in the Reinickendorf borough, and the convention center/fairgrounds. Uncoated metal roofs have a greatly reduced emission value of under 0.1 and are given a special category. It is not possible to calculate their “true” surface temperature from the radiation temperatures in the thermal imaging (cf. Methodology). They appear too cold in the map. All other flat-roof complexes have predominantly horizontal orientations and possess very effective irradiation and radiation conditions. They reach very high daytime maximum temperatures and minimum night-time temperatures.

The thermic behavior of allotment garden areas and parks with meadows is basically similar to green land and field areas outside the city, and can be similarly categorized. They are, however, greatly influenced by their location in the city. Some examples of open-structured areas formed by lawns and trees with small crowns are the allotment gardens at the Südgelände; south of the Hohenzollern canal; around the Britz Garden; and the meadows at the Johannisthal waterworks.

In comparison to these surfaces, green areas with large amounts of tree stocks display thermic behavior like that of forested areas, but also like similar parks in the urban area. One example is the Große Tiergarten, of about 220 ha size. The Große Tiergarten, as a park in the center of the city, is exposed to the influence of the surrounding built-up area. This influence is directly clear in its thermal image, such as in the “heat wedge” west of the Brandenburg Gate. It can also be assumed that the radiation loss, especially of the forested area, is limited by the warmer surrounding air; more strongly by weather conditions with strong currents than by those with weak winds. Cold air layers above meadows build up relatively quickly, and their thickness increases during the night. Thermal imaging does not register the soil of predominantly closed forested areas, but rather the radiation at the height of the tree crowns. Heat stored in the crown and trunk prevents a quick cooling in the evening. The further course of events is an introduction of warm air from the vicinity. This warm air cools on the leaf surfaces and diverts into the trunk region. It is supplemented by warm air from the trunk region and/or the vicinity above the tree crowns, which then again supplies heat to the radiating leaf surfaces. This process ends only after a layer of cold air large enough to encompass the crown area has built up on the stock floor. The temperature gradient between meadow areas and tree areas in the Große Tiergarten which can be expected at the time point of greatest cooling is thus very strongly dependent on the height, type and density of tree stocks.

Forest areas basically follow the cooling schema described above. Cooling in uneven terrain is additionally delayed by cold air flows or cold air collections in hollows. The high temperatures in tree stocks in ridge areas (the hills of the Havel, Müggelberge, and Schäferberg) can be explained by the fact that here the build up of a cold air layer from the floor is prevented by a cold air flow following the slope. Inversely, the cold air produced is concentrated in the areas of hollows.

These influences in the boundary areas of surface waters overlap with higher temperature levels caused by the strong heat storage capabilities of water. The surface waters are very balanced in a day/night rhythm. The course of temperature is dependent on water depth, (a “warehouse” of stored heat) as well as direct anthropogenic influences. Return inflows of water used for cooling the Reuther thermoelectric plant and the Oberhavel power plant are clearly recognizable in the thermal imaging.

The course of temperatures in built-up areas is mainly a function of the built-up structures. The large amount of heat-storing materials, such as concrete, stone, and asphalt, leads to the expected highest temperature values, after wetlands and surface waters, in wide areas of the inner city, in core areas, as well as industrial areas. They can thus be called extensive heat sources which exert the greatest influence on the formation of the “heat-island effect”.

The intensity of local cooling is influenced by the amount of construction materials with high heat-storage properties used in buildings, streets and city squares, as well as the more quickly and more strongly radiating surfaces of building roofs and green areas. There are differences in dense inner city locations between those dense block structures with a high portion of poor heat-conducting roof areas and interior courtyards closed off to sunshine, and those inner city areas which have more space and larger intervals between structures. It is just as difficult estimate the total climatic situation of these built-up areas as it is for comparable industrial areas. Individual cases require a strict differentiation of the temperature levels as registered in the thermal imaging.

Areas subject to strong anthropogenic influences can be expected to display similar high cooling rates at all locations where no firm connection to the underground exists, such as the roadstone areas of railway lines and adjoining areas.

Map 04.06.2: Surface Temperatures in the Morning

Surface heating began with sunrise in this season at 6.00 CET. The thermic situation had only an intermediate differentiation at the 10.30 time of satellite scanning, depending on the materials heated. Individual surfaces are mirror images of the night survey, in many cases, and will be mentioned only briefly.

The most conspicuous locations are the open areas of meadows, harvested farmlands, and areas of similar use, analogous to the night imaging. Their quick heating is due to high heat turnover on their surfaces resulting from reduced heat conductivity underground and a low heat storage capacity. The comparatively high volume of air in dry soil insulates the soil surface from deeper soil levels. Heat turnover between individual soil components is greatly hindered. This causes temperature differences of more than 20 °C between the day and night satellite images. 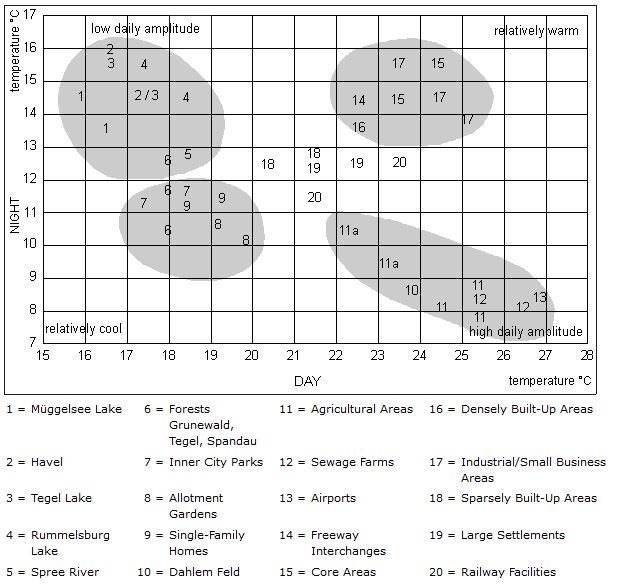 Surface waters, in contrast, only have a flat surface temperature gradient of about 2-3 °C between day and night, even if the water is shallow and thus has an increased energy turnover. Besides the high heat storage capacity there is, as in other moist areas, the temperature relieving effect of a high rate of evaporation in the daytime. The large surfaces of flat-roof complexes in industrial and small business areas also appear very cold (cf. Evening survey).

An influence on park facilities with trees and forests at the time of imaging was that the degree of cooling reached in the course of the night cooling phase acts as an initial buffer zone up to the level of the tree crowns. This buffer is reinforced by the evaporation beginning from the leaf masses (evaporative cooling). The forests also seem more homogeneous than in the evening imaging, since the effect of the cold air outflow is not an influence in knolls.

The densely built-up area can not yet act in the expected fashion as a central heat-island in the morning because of the effects of the described physical laws. Values approaching those of field areas and meadows are to be expected at a later point in time, with stronger radiation of stored heat.

Temperature gradients chosen for the Differential Map were only qualitatively classified, as previously accented. Large portions of the area to be imaged remained within the range of medium temperature gradients due to the times of scanning. The only areas representationally presented are surface waters, with their low temperature fluctuations in day-night rhythm and, inversely, areas with maximum gradients (non-grown over or meadow-like structures).

The evaluation of the thermic effectiveness of surface structures is facilitated by interpretation of the respective temperature levels where fluctuations occur, and a qualitative presentation of day and night temperature differences. Figure 2 refers to selected surface types and individual locations, and orders them into a day-night temperature matrix.

Surface types with relatively high or low daily amplitude can be recognized here. Beside them are areas which are basically to be classified as very cool or very warm. This is of great significance for effects on air masses layered above the surface, whereby the horizontal air exchange can result in effects on air temperature. Various classifications of surface type characterize the distribution of day and night surface temperatures. Low day and night temperatures of forests, parks, allotment gardens and sparsely-built-up settlements at the city’s edge contrast with high surface temperatures throughout the day at densely built-up inner city, traffic and industrial areas. Surface waters, with low day and night temperatures, show a greater flattening of the daily amplitude, due to higher capacities of heat storage and heat conductivity. This is transferred into the direct vicinity of the bank and shore areas. Agricultural areas, sewage farms, and railway facilities, in contrast, heat very quickly during the day and cool just as quickly in the night. The greatest amplitudes occur at these locations.