Traffic still represents the crucial burden factor of the urban environment. Its numerical development is observed by regular traffic investigations. Responsible for these counts on highways, national highways as well as the remaining main road network is the ministry for urban development in Berlin. The current data refer to the year 2005 and update the values of the preceding count of 1998. Based on a high comparability of the data bases and methods you can look for further explications at the map text of the edition 1995. 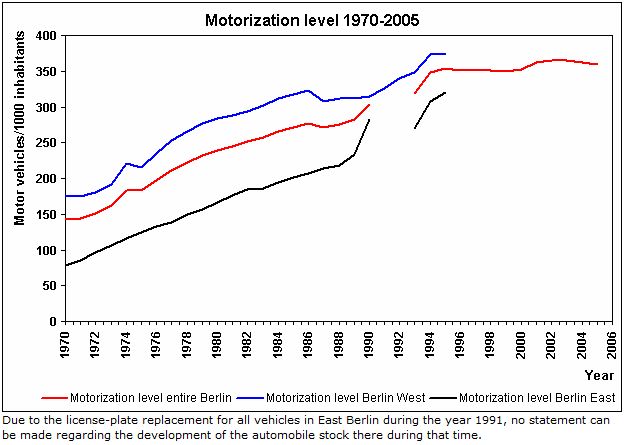 In comparison of the three counting periods, it becomes apparent that an expansion of the main road network took place for the traffic investigations in 2005. Opposite to 1995, new highway sections were to be considered: BAB A 113 (new) Späthstraße – Adlershof as well as BAB A 100, the expansion of the western city ring through the tunnel “Ortsteil Britz” towards Buschkrugallee. But also some streets of the subsidiary, additional network “revalued” for the current traffic investigations of the main network.
So among other things these changes in the investigated network in 2005 affirm the increase of the low up to middle burdened network sections.
Taking into account the mentioned new highway sections, the class with the highest motor vehicle numbers (> 50,000) has been retained unchanged. So anymore the city-highway sections as well as the big arterial roads represents the main points of “stress concentration” within the city-road-network. The section in the range of the highway triangle Funkturm represents Germany’s busiest highway section with an average of about 212,000 Kfz/24 h passing the long-run metering point Halensee.

The main burden focuses still on the bigger highways and parkways. The continual replace of high-emitting cars through pollutant-reduced leads to a decreasing pollution in spite of the increasing driving-performance. However many traffic caused problems like particles from tyres, the noise burdens as well as the enormous surface demand of the recumbent and driving traffic remain as serious impairment of the urban life quality (see. map 03.11 Traffic-related Air Pollution – NO2 and PM10).