Between 1950 and 2010, 11.5 % of the green and open spaces within the municipal area (10,362 hectares) were consumed for purposes of construction in Berlin, while only a very few formerly built-up areas were changed into open space during the same period (0.5 % of the municipal area, 450 hectares). The open-space losses were predominately on the outskirts of the city, and were frequently achieved at the expense of farmland and allotment gardens. 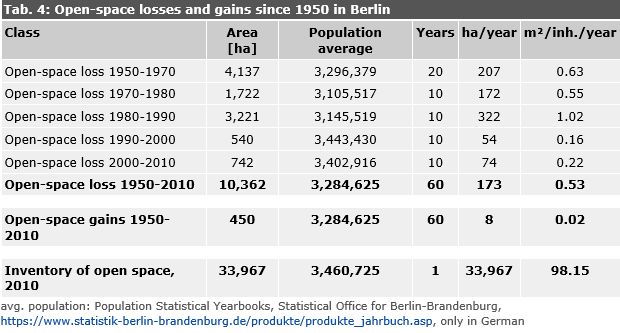 Tab. 4: Open-space losses and gains since 1950 (referring to January 1 of each year) in Berlin
Image: according to Environmental Atlas 06.03, Population Statistical Yearbooks, Statistical Office for Berlin-Brandenburg

Individual gains in open space, mostly due to the impacts of war, are predominantly found in the inner city, such as in Görlitzer Park or Mauerpark.

The extensive consumption of hitherto non-built-up areas in East Berlin after World War II began approx. twenty years later than in West Berlin. In West Berlin, most open spaces were built up between 1950 and 1970, while in East Berlin, this occurred during the 1970s and 1980s. These differences in urban development reflected the political division of the city after World War II.

At the end of the war, approx. 30 % of all buildings had been totally destroyed or seriously damaged. The boroughs of Mitte and Tiergarten were the most strongly affected; there, the proportion was over 50 % of all buildings; in Friedrichshain, it was 45 %. Initially, the economic situation in both the Soviet and the western sectors restricted building activity largely to repair. After the end of the blockade in 1949, West Berlin was able to profit from US economic aid under the Berlin construction programme. By contrast, East Germany and East Berlin were additionally burdened by reparation confiscations and dismantling.

During the 1950s and 1960s, the urban-development strategy of the West Berlin construction programme consisted in the separation of municipal functions and the relief of urban centres from dense construction. In the inner city, a large-scale de-coring, tearing-down and rebuilding programme was initiated. Large, consolidated, residential areas and new commercial districts grew up at the outskirts of the city on formerly open space. With the International Building Exhibition in 1956, large residential areas were built, such as the Schillerhöhe at the Schiller Park in Wedding, or in North Charlottenburg. However, new housing estates were also built on formerly built-up areas destroyed during the war, such as the Hansaviertel in Tiergarten.

From the mid-1960s to the mid-1970s, major housing estates were built at the outskirts of Berlin. Examples were the satellite towns Gropiusstadt in Neukölln and Märkisches Viertel in Reinickendorf.

During the 1970s, construction activity was concentrated on the revitalization of the inner city.

During the 1980s, when the demand for living space had essentially been met, construction activity was in general confined to small fallow areas which were, for instance, built up in the context of the International Building Exhibition in 1984-87. Only rarely did any major consumption of open space occur. New industrial and commercial areas were established in Ruhleben, Marienfelde, and west of Neuköllnische Allee.

The few areas built up after 1990 involved compact residential areas on former ruderal and allotment-garden areas in Spandau, Steglitz, Rudow and Reinickendorf, as well as the buildings around Potsdamer Platz.

As a reaction to increasing apartment vacancy rates, construction of multi-storey residential buildings declines sharply after 2000; in many plans for urban expansion and utilization-change of areas, plans for such buildings were cancelled. A few new apartment buildings can be found in Frohnau, Buckow, Dahlem, Lichterfelde West and Altglienicke. Single-family housing moved into the foreground. The Government Quarter was completed. Internal development obviously has priority; less than 10 % of land consumption is allotted to urban expansion (e. g. the Diplomatenviertel (Diplomats’ quarter), the building of the Foreign Intelligence Service of Germany (BND) at Chausseestraße between Potsdamer Platz and Pariser Platz). Since its low in 2006, residential construction has been on the rise again. From 2007, the construction of multi-storey housing, too, has gained in importance again (SenStadtUm 2011).

Increased land consumption was carried out for large-scale retail and traffic projects, such as the freeway in Neukölln.

Only during the 1960s, after the construction of the Wall and the industrialization of the East Berlin construction industry, did the reconstruction of the city centre begin. The goal was the fundamental restructuring of the city centre. The old tenement apartments were to give way to new buildings. The extensive demolition plans failed however, because of the difficult economic conditions and because of the existing housing shortage. At first, the areas along Unter den Linden and Karl-Liebknecht-Straße, around Alexanderplatz, and along Karl-Marx-Allee up to Frankfurter Allee, heavily destroyed during the war, were rebuilt. New construction then continued in the Fischerkiez (the southern part of the main Spree Island), and along Leipziger Straße.

The reconstruction of the city centre during the 1960s did not lead to any major loss of open space. However, the concentration on restructuring the city centre led to the neglect of new housing construction. Discontent with the living situation increased among the East Berlin population. As a result, the housing programme was proclaimed as the main emphasis of the social program in 1971. The goal was the elimination of the housing shortage through the construction of new apartment buildings and through the rehabilitation of the old buildings in the city centre, which had until then been neglected. During the 1970s and 1980s, large satellite towns were built on formerly open space by means of industrial prefabricated construction, with an immense mobilization of labor from all over East Germany. New boroughs were established: Marzahn in 1976, Hohenschönhausen in 1979 and Hellersdorf in 1980. Other, albeit considerably smaller, residential estates were built along the entire outskirts of East Berlin through 1990.

The large development areas of Marzahn, Hohenschönhausen and Hellersdorf arose to a large extent on the former sewage fields of Malchow and Hellersdorf which were closed down in 1968-1969. Near-natural areas along streams such as the Wuhle or Nordgraben were not built up, since the underground was not suitable for construction. However, smaller near-natural areas, such as pools, were often filled in and built upon.

In new residential areas or large housing estates on large contiguous open spaces, some small, isolated green spaces of no recreational or free-time value were sometimes left behind. One example is the construction carried out during the 1970s and 1980s in Lichtenberg, between Rummelsburger Straße and Saganer Straße. All that remained here of this large, formerly horticulturally or agriculturally used area was a narrow strip of parkland and a little green space.

The expansion of industrial and commercial areas also contributed to the loss of open space. The losses in the Rhinstraße/ Gehrenseestraße/ Hohenschönhauser Straße area, along Märkische Allee, and along the motorway in Pankow were particularly high.

After 1990, a few concrete-plate blocks which had already been planned or started were completed in Hohenschönhausen and Marzahn. The largest residential areas were built in the urban-expansion areas certified under the 1994 Land-Use Plan in Buchholz and North Karow.

After 2000, new residential areas were built primarily in Falkenberg, South Biesdorf, Buchholz, Wartenberg and in Adlershof.

Overall, during the two decades since reunification, 85 % of urban development in Berlin took place within the body of the city, while only 15 % extended beyond it (SenStadtUm 2011).