The Concept Map of Soil Associations was prepared for West Berlin based on the Map of Soil Associations and commentaries by Grenzius (Grenzius 1987), which define and describe soil associations, was updated for the first time in 1990. The assignment of soil associations, the determination of new soil associations and concept soil associations for East Berlin were enabled by a transposition concept (Aey 1991) based on analogical conclusions, and with the aid of information from geologic and topographic maps, forest site surveys, detailed maps, aerial photography evaluations, and information about area uses and degrees of sealing. Newer soil maps and an updated map of area uses in West Berlin necessitated a reworking and updating of the map of soil associations in West Berlin. For the first time a map of soil for the entire city was created middle of the (SenStadt 1998). Changes of landuse, updated data of surface sealing and depth to groundwater demand an update in 2003, the result is published now. Table 3 gives the map data bases and the preliminary information used in the different stages of work. 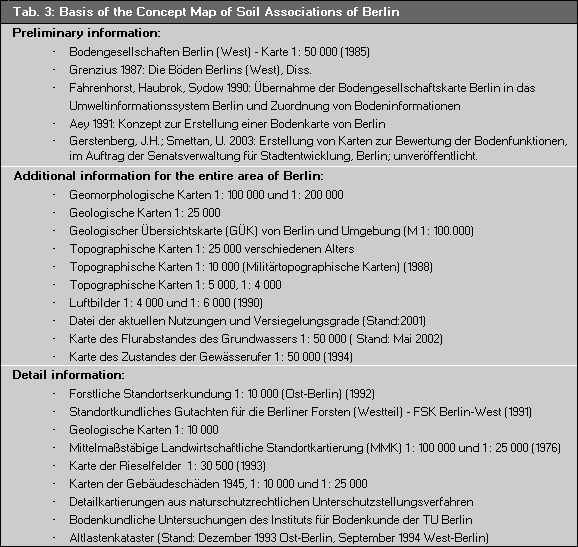