Water Conservation Districts and Groundwater Use 1990

The Stolpe waterworks is located to the North, just outside the city limits. It is operated by the Berlin Public Water Companies and serves the drinking water supply of Berlin and a few nearby communities in the state of Brandenburg. The protection areas of the Staaken, Eichwalde and Erkner waterworks, which serve communities in the vicinity of Berlin, are located both inside and outside Berlin. 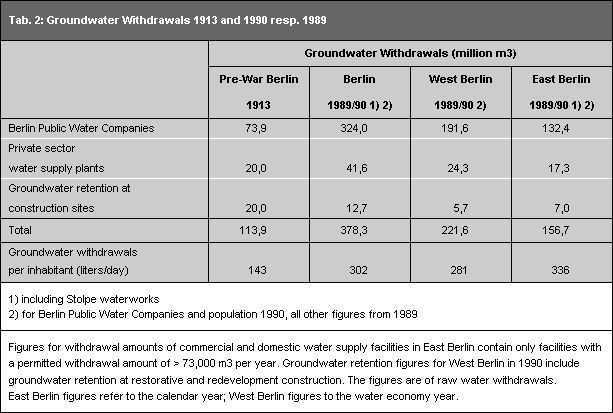 Amounts withdrawn by the Berlin Public Water Companies have risen ever since the beginning of public water supplies. A clear reduction of removal amounts occurred after World War II. West Berlin removal amounts steadied in the mid-70’s. In East Berlin there was a continual increase until 1989 (cf. Fig. 4). 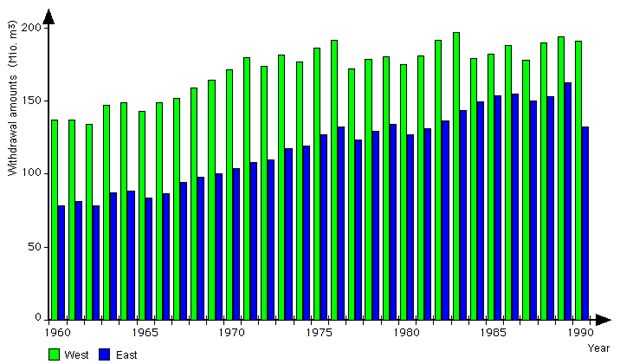 The approximately 320 larger private sector water supply plants removed 42 million m3 of groundwater in 1989. This water was used as drinking, operating, and cooling water, and for plants and green areas. The approximately 60 plants which also remove for drinking water are specially monitored to maintain a water quality fit for human consumption. The largest plants in East Berlin each removed about 1.2 million m3 in 1989. In West Berlin the largest remover withdrew about 2.8 million m3.

The map depicts some private sector water supply plants whose permitted withdrawal amounts are zero, but which do remove groundwater. A few of these plants have received a permit in the meantime (the information in the map is from 1989). Other operators fall under the no-permit-required use, since their removals are minimal (§ 33 WHG resp. § 38 BWG). No permit was required under Allied law.

Amounts removed by West Berlin private sector water supply plants are dropping (cf. Fig. 5). There is a tendency to close such plants, primarily for economic reasons, and to take water from the public network. There are no comparable figures available for East Berlin. 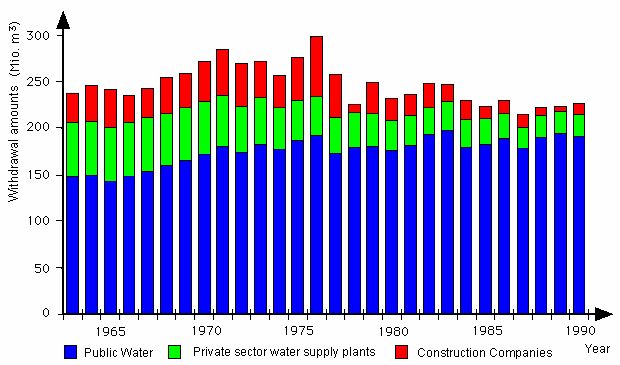 Fig. 5: Groundwater Withdrawal Amounts According to Use in West Berlin from 1963-1990
Image: Umweltatlas Berlin

Since 1987, construction groundwater retention for restoration and redevelopment measures have been included. The figures are for raw water withdrawals and refer to the water economy year.

Besides "true" and manmade recharged groundwater, a considerable portion of water withdrawn by the Public Water Companies comes from bank filtered water. Wells in the vicinity of surface waters produce cones of depression, and water from the bank areas of the Havel, Dahme and Spree flow into them. The proportion of bank filtered water in the total withdrawal amount of each well gallery depends on the distance of the well from the surface waters. An average of 50% of the removals of the Berlin Public Water Companies has been assumed. Figure 6 depicts the origin of waters used by the public water supply, as well as a division of its uses. Water consumption from public water supplies (purified water including lake water) per inhabitant in West Berlin was 233 liters/day in 1990 (1991: 229 l/d). In East Berlin it was 318 l/d (1991: 254 l/d). The average for all Berlin was 268 l/d. Water consumption of Berlin households totaled 213 million m3, and per inhabitant was 172 l/d. 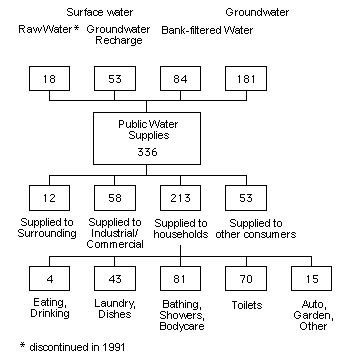 Fig. 6: Origin and Use of Water from Public Drinking Water Supplies in Berlin 1989/90 in million m3 per year
Image: according to AHU 1991

Increased sealing of soil surfaces and Berlin’s rising population necessitate more water conservation and new methods of recharging groundwater both to maintain groundwater balance, and avoid use of drinking water supplies from distant areas. One procedure striven for as a solution to this problem is the use of former sewage farms for the return of purified surface water, or the best purified water from sewage treatment plants. The groundwater recharge rate could also be raised by returning rainwater to percolation. Rainwater that would otherwise flow into the canalization could be separately collected and either directly discharged onto non-built-up surfaces, or discharged into artificial ponds to infiltrate the ground and percolate into groundwater. In this sense, measures to `de-seal’ surfaces would also contribute to an increased groundwater recharge.