Berlin’s lakes and running waters were formed about 10,000 years ago with the melting of the Weichselian ice age glaciers that had covered the area. These waters are young from a geological perspective. The autochtone (native) fresh water fish fauna at that time comprised 56 species, according to Thienemann (1925). Migratory fish which visit fresh water only for spawning are not included in this number. Of these 56 species of fish, 31 populated the waters of what is today Berlin. They are viewed as the original, or autochtonic fish fauna of Berlin. They were and are subject to diverse changes.

The dynamic of the Spree and Havel rivers was once the prime dominant of the Berlin bodies of water system, but still waters and dammed-up waters have become the primary factors. The construction of dams to drive mill wheels can be traced back to the 13th century. Other water-stemming projects as well as locks for canal navigation were established. The straightening of single river sections began in the 17th century. Canal construction reached a high point in the middle of the 19th century. After this time it was no longer possible for migratory fish to overcome the high obstacles, even at high water levels, to reach the Berlin urban area. The use of stemmed waters caused the loss of valuable lotic (running water) habitats and the loss of flood areas needed by many fish species. Flow velocities slowed and sedimentation processes led to the overlaying of mud onto coarse-grain sediments. Oxygen-consuming decomposition processes predominated at bodies of water bottoms. Fish species preferring gravelly, oxygen-rich substrate had to leave. They lacked suitable spawning and habitat conditions as well as possibilities of compensatory migrations. This is why the earlier primary fish species, the barbel, became extinct. Bodies of water characteristics changed from those of a classical barbel fish region to those of a bream fish region.

Beyond the continuing negative effects brought by the engineering of bodies of water, inputs of every kind had an important role. Even before the turn of the century ,the Spree and Havel rivers were so strongly contaminated by industrial waste water, sewage effluents and feces, that fish-kills occurred frequently and commercial fishing was seriously harmed. At that time, for example, fishing boats transported their live catch in cages (Drebeln) towed through the water. Poor oxygen conditions at the surface of the water made it impossible for boats to bring their fish in these Drebeln boxes from the Lower Havel to Berlin (today the inner city). The fish died on the way. Even the urban sewage farms gave only a certain measure of relief for the quality of bodies of water.

These anthropogeneous influences led to an impoverishment of Berlin fish fauna. The barbel and other lotic species of fish requiring stronger currents and oxygen-rich water, including the pond lamprey and schmerle, died off in Berlin.

These are doubtless the most important factors. But that does not exhaust the range of anthropogenic damages to fish stocks. The recreational use of bodies of water is a large, continually increasing factor. Wave impact caused by motorboats and swimming promote the erosion of shores and damage the protective belt of vegetation.

Recreational fishing must be differentiated. Damages and pollution to shores and bodies of water caused by recreational fishers in bodies of water already burdened by a multiplicity of uses (fishing, swimming, recreational boating, etc.) are relatively small in comparison to the countless other visitors and users. Fishers influence surface water eco-systems mainly by interventions in the biocoenosis in the form of fish removals and fish stocking. Economically valuable fish or those of interest to fishers are disproportionately promoted. An imbalance of autochthonic fish fauna occurs when species not indigenous to the area are introduced, such as rainbow trout and brown bullhead. They can be competitors for nutrients, egg-predators and predators. Indigenous fish may not be able to adjust. The species have specialized in the course of their development and adapted optimally to their habitat space to avoid competitive relationships. This process results in an eco-system in which most species have a relatively limited range, an ecological niche, which only they can optimally use. The effect of introducing allochtonic (non-autochtonic) species, into this ecosystem cannot be estimated. Indigenous species can be displaced. Lost with them are genetically coded specializations and adaptations to contemporary bodies of water conditions won in the course of evolution.

The overfeeding commonly found in heavily-fished bodies of water represents a nutrient impact which is not negligible.

The first inventories of fish fauna in Berlin bodies of water were made about 100 years ago and offer historically valuable starting points for estimating effects on the constellation of fish species and their changes in time. Individual bodies of water, primarily in southeast Berlin, were investigated again in the 50’s. Fish stock inventories later could only be conducted separately in divided Berlin, because of the political situation. Red Data Books were separately prepared in East and West Berlin (cf. Tab. 1). Divergent classifications of endangerment to individual species are mostly due to different bodies of water conditions in the two parts of the city. Large river lakes dominate in West Berlin, while East Berlin has more running waters. There are thus considerable differences in the number of species, as well as population sizes of flowing water fish and river fish. This led to different estimations of endangerment. 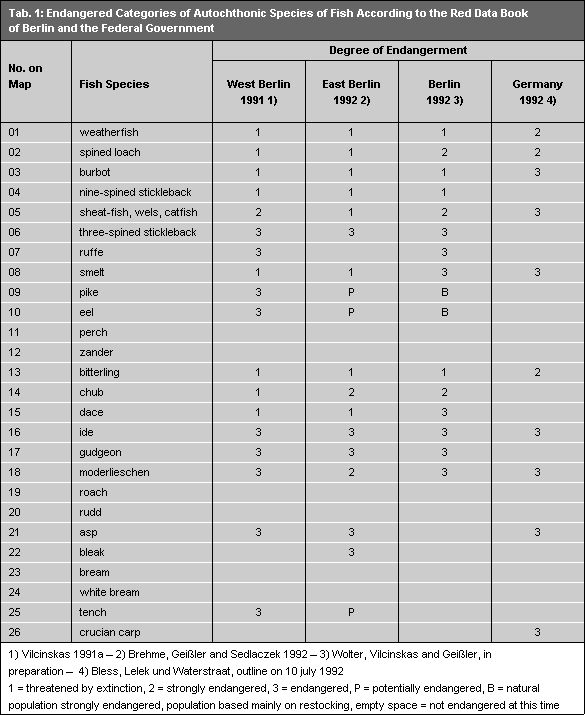 Tab. 1: Endangered Categories of Autochthonic Species of Fish According to the Red Data Book of Berlin and the Federal Government
Image: Umweltatlas Berlin

After it became possible to prepare one Red Data Book for all Berlin, previously collected data on fish populations was coordinated and uniform standards of evaluation were developed. The somewhat smaller number of entries in the endangered classification in Table 1 are not due to improvements in habitat, but rather to a larger investigative area and a greater number of samples. Almost twice as many bodies of water were sampled as in previous studies. This led to the discovery of new populations of a larger number of fish species. A new, annotated Red Data Book for Berlin was prepared on this basis (Wolter et al., in preparation).

There are more than 250 bodies of water in Berlin, all with fish fauna strongly influenced by humans.

The essential prerequisites for well-directed biotope protection measures are knowledge of the current distribution and frequency of fish fauna, and the most important factors endangering their existence.

The investigation of fish populations is an aid for evaluating bodies of water. It enables an estimation of complex factors and their long-term effects on higher aquatic organisms without having to study each one singly. The prevailing fish fauna is an index for the ecological condition of a body of water. The determination of a large number of species of fish is thus to be judged positively, because this ecological elaboration indicates the existence of many different habitats, and thus a great structural diversity. The possibility that a given population survey may be distorted by restocking must be kept in mind.