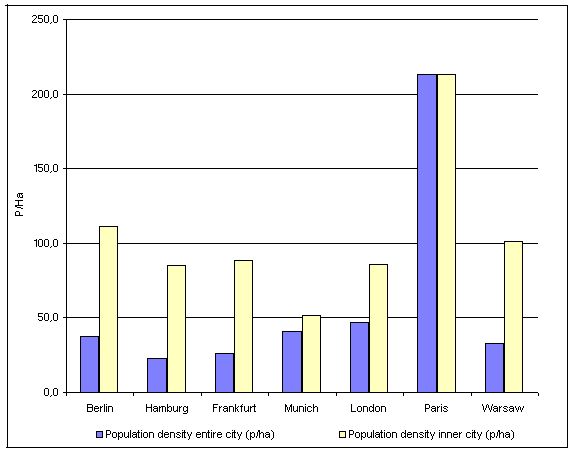 In Paris the inner city and and the municipal border of the city area are overlaying; the nearest major administration unit is the Ile-de-France with 12,000 km² and about 11,000,000 inhabitants (9.1 p/ha).

The 111.5 p/ha population density of the Berlin inner city is above average and even overtops the according value for London.

The Map of Population Density depicts population density in terms of statistical blocks or segment of blocks (cf. Methodology). Therefore this presentation is partly more detailled in comparison to the earlier edition 1996. High population density causes great environmental stresses, such as noise from traffic and air pollution from heating facilities. Residents are dependent on a small number of public green areas for relaxation. These areas are mostly small, heavily visited, often overused, and loud. Private green areas exist only to a limited extent. Some densely populated areas of Berlin are attractive residential areas in spite of this. Some late 19th-century block-style constructions are especially attractive when they have living quarters of generous size, and are complemented by a good infrastructure of small businesses, restaurants, cultural facilities, services, and an extensive public transporation system. Rich urban life flourishes here. This urbanity is missed by many living in the purely residential areas at the edge of the city. These areas have a relatively low population density, a high ratio of open space, and less air and noise pollution.

The inner city boroughs of Mitte, Tiergarten, Wedding, Prenzlauer Berg, Friedrichshain and Kreuzberg reached their greatest population density in 1910 with 311 p/ha. Today, the population density of these boroughs has dropped to 100 p/ha, one-third of the peak value (cf. Fig. 2). 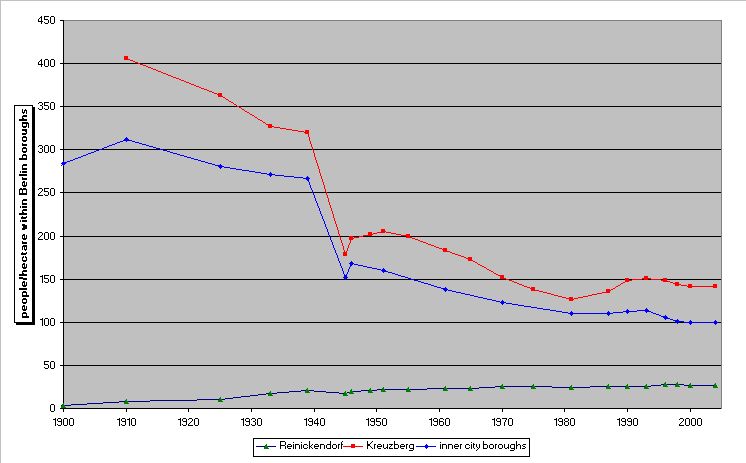 Detailed and current data bases of population density in specific urban areas are useful for the planning of various public departments. The Department of Urban Planning, for example, uses these figures as a basis for planning such infrastructure facilities as schools, businesses and playgrounds. Landscape Planning uses these figures for analyzing the number and accessibility of green spaces near to residential areas (cf. Map 06.05, SenStadtUmTech 1996a). Knowledge of population density also allows conclusions to be drawn regarding environmental stresses, such as calculating emissions from the use of solvents and cleaning chemicals in private residences, and determining carbon dioxide loads (cf. Map 03.08, SenStadtUm 1994).