The present maps show clearly that the traffic, which has increased considerably, both inside the city and between the city and its surrounding areas since the political change, causes very great noise pollution. Vehicular traffic predominates, but many residents are also exposed to considerable burden due to rail traffic.

For the assessment of the impact situation, the reference values 65 dB (A) daytime and of 55 dB (A) nighttime, which have been determined by noise-effect research, are used in the following; these values have also been established as target values under the Berlin Noise Level Reduction Plan (cf. Ising et al., 1997).

In Table 3 the lengths of the sides of the street affected by the individual level classes, and their proportional shares of the total length, are shown.

For daytime noise, the reference value of 65 dB (A) is exceeded on 1,334 km of built-up section-sides (which corresponds to 59.8%). Assessment levels of over 80 dB (A) could no longer be ascertained; on the other hand, traffic noise below 50 dB (A) is the exception (0.9%) in the primary road network.

For nighttime noise, the following situation has been ascertained: The nighttime reference value of 55 dB (A) is exceeded at almost 80% of the road sections with roadside buildings. The predominant nighttime impact (59%) is in the range of 55-65 dB (A). Assessing the Berlin noise situation based on the above target values, it must be assumed that daytime noise pollution would have to be lowered by up to 15 db (A) for about 1,330 km of roadway, and nighttime pollution by that amount on as much as 1,780 km. 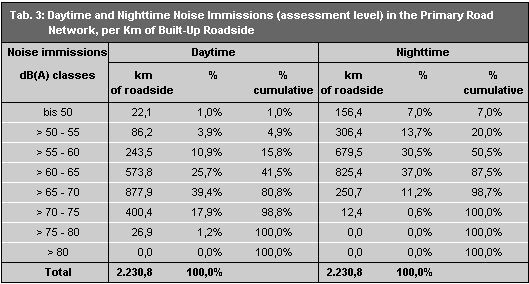 In addition to the level of impact, the number of residents impacted by traffic noise along the main road network streets was assessed.

For this purpose, the buildings present at a distance of up to 1.5 times the distance used for the level calculation were first ascertained. The numbers of affected person was calculated on the basis of the number of storeys of these buildings used for residential purposes, the number of apartments per storey, the mean household size in each borough, and with a factor for the probability of presence in the rooms adjoining the street or railway route. These data do not reflect actual populations along concrete road or track sections.

The number of persons affected in the individual level classes can be seen in Table 4, below. 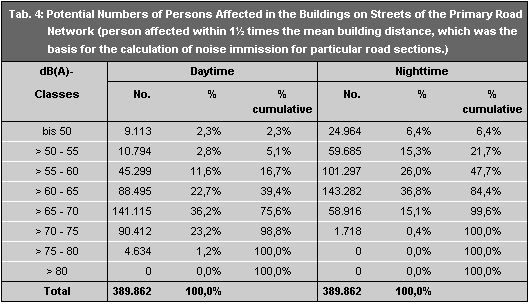 (Persons affected within 1½ times the mean building distance, which was the basis for the calculation of noise immission for particular road sections.)

Aboveground railroad traffic, with a total of 386 km of built-up track section-sites, is far less extensive that road traffic. Nevertheless, particularly along inner-city track sections, it causes (additional) high noise pollution. The daytime noise level along 25% of the built-up sections is over 65 dB (A); nighttime levels of over 55 dB (A) have been calculated along 53% of all built-up sections. The very high speeds of passing freight trains on the Berlin outer ring are also a major factor here. In the area of the rapid rail (S-Bahn) system, with its relatively low building distances, noise levels of more than 70 dB (A), and at places with steel bridges, maximum values of over 75 dB (A), are reached. Considerable impacts are caused by the above-ground segments of subway lines. The main problem areas are the viaduct segments in Schöneberg, Kreuzberg and Prenzlauer Berg. The nighttime interruption of operation of rapid-rail and subway traffic provide a measure of relief.

The following Tables 5 and 6 show the lengths of the built-up section-sides of the streets affected, and the number of persons affected for the individual level classes. 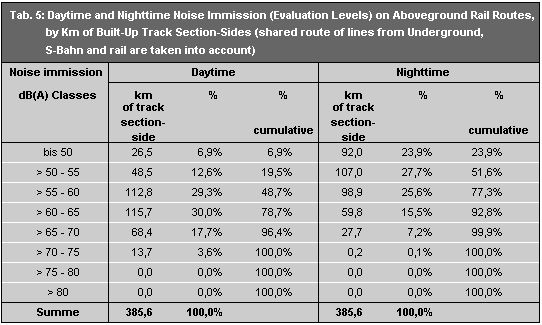 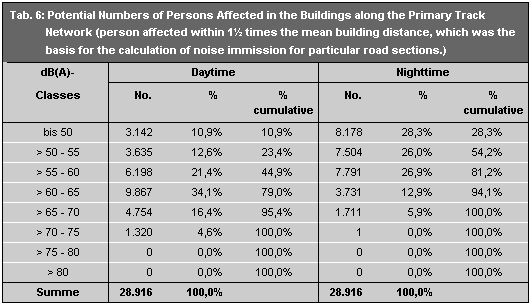 (persons affected within 1½ times the mean building distance, which was the basis for the calculation of noise immission for particular track sections.)

The results of the surveys carried out support the great need for action for the development and implementation of a comprehensive noise-level reduction planning. The necessary relief is attainable – if at all – only by medium and long-term measures. In addition to improvements in vehicle technology leading to reduction in noise emissions, traffic organizational and structural measures will also have to be considered, in order to contribute to this relief. As a first step, such comprehensive noise-level reduction plans are currently being prepared in three pilot projects under contract with the Senate Department of Urban Development.