The data used as a statistical base here is part of nationwide data that can be accessed free of charge on the DWD’s Climate Data Center publication platform as the following data set:

The grids use the Gauss-Kruger zone 3 coordinate system. The spatial resolution is 1 km x 1 km.

The mean air temperatures are available for different reference periods (1961-1990, 1971-2000, 1981-2010). They describe the 30-year mean air temperature in 0.1° C increments at 2 m altitude for each calendar month, the four seasons and the whole year. The winter mean of a year includes the month of December from the previous year, i.e. the mean winter temperatures for the period 1981-2010 include December 1980.

The DWD considered potential height dependencies while ascertaining the temperature distributions. The gridded data does not display processes impacting the climate or weather conditions that are not directly recorded by the station measuring network or cannot be determined by regression, such as local effects from an urban heat island outside the observation area of the station network. See DWD 2018 for a complete description of the data set.

The DWD station measurement network covers the entire area of Germany. Its spatial resolution, however, means that the stations are rather sparsely distributed across the urban area of Berlin, especially when considering its heterogeneity. The distribution is also not entirely consistent for the measurement period from 1981 to 2010.

Figure 1 shows the distribution of the available climate stations for the year 2000: 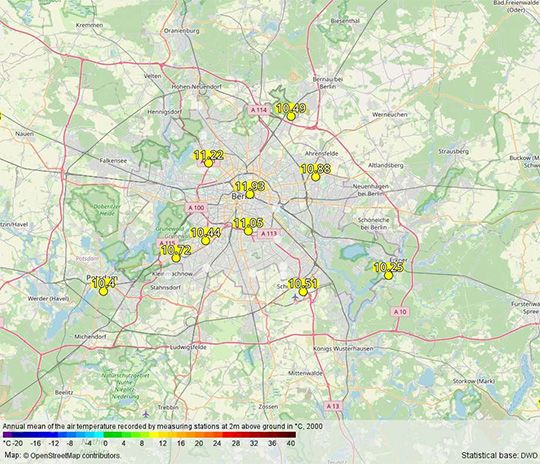 Fig.1: Annual mean of the air temperature recorded by measuring stations at 2m above ground in °C, for the period of 2000
Image: DWD Climate Data Center, accessed on February 3, 2021