The intensity and distribution of precipitation determine the meteorological and climatic conditions of an area. They also directly affect groundwater recharge and the water supply available to plants. Precipitation also causes wash-outs from the atmosphere and, as "infiltration water" (cf.page), is the medium for transport of pollutants into the ground.

One example is the increase of precipitation in the form of slope rains within a limited area. Slope rains are mainly due to the influence of bottom friction, the roughness parameter. Other influences in urban areas include increasing amounts of aerosols. The aerosols serve as nuclei for condensation, facilitating the formation of clouds and precipitation. Precipitation is also caused by the warmth of urban areas, in certain weather situations (convective precipitation).

The effects of precipitation are also distinguished between those processes which purify the atmosphere and those processes resulting in pollutant contamination of the environment. Heavy precipitation does more than clean the air. High degrees of surface sealing and the extensive rain water and waste water disposal systems also result in the flushing of a range of pollutants in concentrated form into the storm sewer system and thus into bodies of water (cf. Map 02.09, SenStadtUm 1992b).

Berlin’s separate sewer system has about 3,000 km of storm sewers. The storm sewers collect dust, air pollutants, street surfacing and tire abrasion, oil spills, and other materials. This highly polluted precipitation water is diverted directly into smaller and larger bodies of water at approximately 730 sites. The combined sewer system collects domestic, commercial, and industrial waste waters as well as rainwater. Heavy precipitation can cause short-term overloading of the disposal system, resulting in the diversion of all combined, unpurified waters into the receiving bodies of water.

A quantification of the effects of urban structures on precipitation requires the long-term operation of an extensive monitoring network. In contrast to surrounding rural areas, the vertical structure of the city (heights of buildings and vegetation) must be considered, in addition to the topographical form of the land.

Precipitation conditions in Berlin are influenced at the regional scale by its location in a transitional area between continental and oceanic-influenced climate systems. Berlin is rather dry compared to other areas of Germany. The average annual quantity of precipitation is 568 mm per square meter. The "Brocken" mountain in southern Germany receives approximately 1,400 mm in an equal period of time. (cf. Fig. 1). 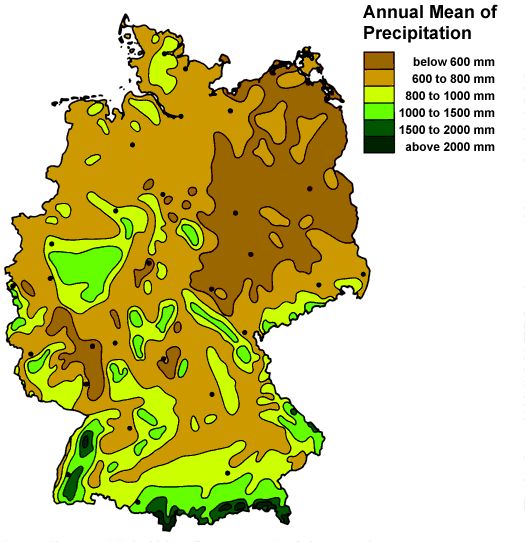 The global climate change will probably affect regional water supplies in the future. Climate changes in the past 10,000 years have clearly changed the geographic distribution of precipitation. Climate changes of equal orders of magnitude but considerably more quickly can be expected in the next 100 years. Their effects on the distribution and quantity of regional precipitation cannot yet be estimated (cf. Kleeberg et al. 1994).