The Teltow and Barnim flat uplands are usually characterized by depths to groundwater greater than 10 m. Confined groundwater often occurs here. Groundwater here was not reachable for vegetation previously either.

Current depths to groundwater in the deeper-lying areas of the Warsaw-Berlin Pleistocene Watercourse are often less than 4 m. Exceptions include the areas near well galleries, and the highpoints of the Müggelberge and Gosener Berge (hills), which are a morphological island in the glacial valley. Groundwater only appears here in depths of greater than 10 m (some more than 40 m). Groundwater levels in the pleistocene watercourse were generally higher previously. The lowering of groundwater by public waterwork withdrawals has strongly influenced local conditions for vegetation (cf. Map 02.11).

Low depths to groundwater are found along the glacial meltwater channel which runs from the Barnim into the pleistocene watercourse. These valley sections, in which the Tegeler Fliess and the Mühlenfliess, as well as the Panke and the Wuhle (creeks) flow today, sometimes stretch deeply into the Barnim. The depth to groundwater in this area is usually under 2 m, and some localized depths of < 1.0 m can be found. The Tegeler Fliess, important because of its relatively large area, has very low depths to groundwater. Withdrawals made from the Tegel Waterwork are noticeable here, too.

Low depths to groundwater are also found in the Spreetal (valley) between Dämeritzsee and Seddinsee (Gosen Meadows). 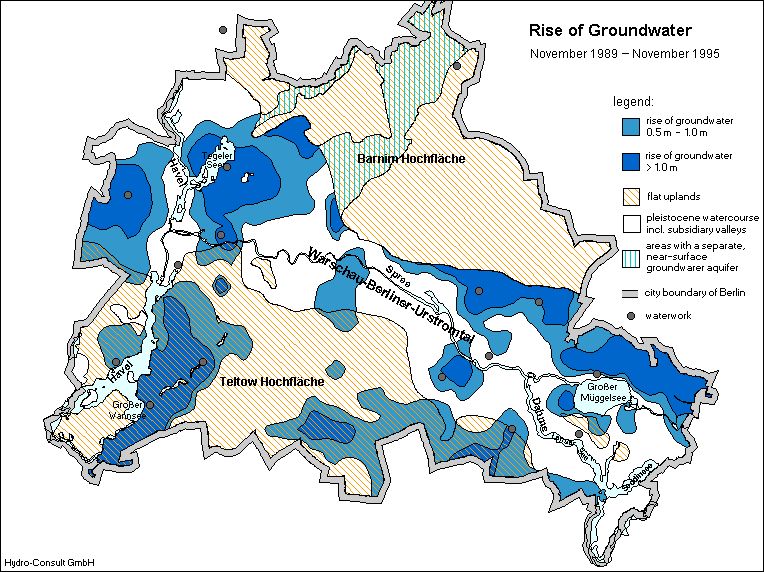