The penetration of the seasonal temperature fluctuation and therefore the depth of the neutral zone is determined by geological factors like the distance from the surface to the groundwater, the heat transfer ability of the rocks, the groundwater formation and from the anthropogenic factors. In Berlin the neutral zone is dependent on the above named relationships at a depth of between 15 – 25 m (Henning & Limberg 1995). 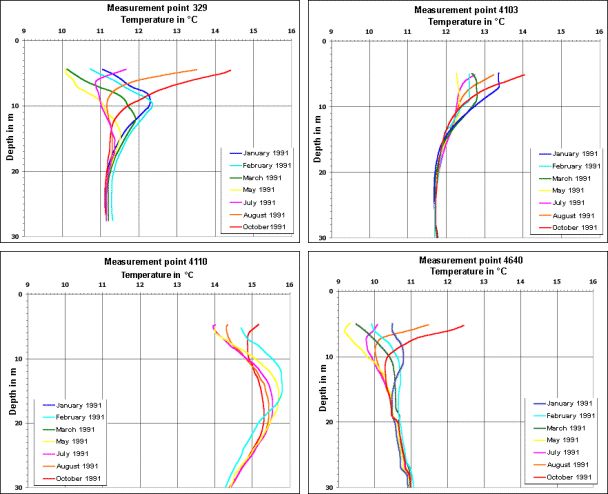 In Fig. 5 the four groundwater measurement points are compiled from about the same geological position but in different settlement areas. The time variation of the temperature dispersion is in the first 30 meters under ground. The groundwater measurement points are in about the same average depth from ca. 5 m. The first ten meters under ground are characterized as a change from fine sand to middle sand.

The observed groundwater temperature as well as the wider temperature dispersion depends on the specific position of the point of measurement.

The lowest temperatures of the near surface groundwater are generally early in the year (February to May), the highest in late summer (September to October). An exception occurs at measurement site 4110. Here the highest temperature is in winter (January) and the lowest point is in summer (July). This measuring site is an extreme case because it is next to an industrial area with a large amount of warm water waste production close to the near surface water. Since the surface-water is warmed up strongly by cooling water discharge, especially during the winter-months, and influent situations predominate through the proximity to a waterworks, an increase of the groundwater-temperature occurs all year. Over the whole year a temperature abnormality including year long fluctuations is observed to only differ by approximately 1 °C.

The shape of the temperature dispersion of measurement sites 329 and 4103 below the neutral zone is a further hint to transient temperature relationships. This means that a long-term rise in the groundwater temperature, also at large depths, can be expected. 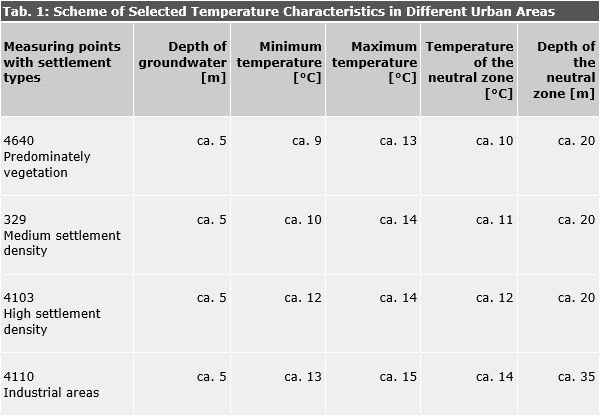 From Table 1 it can be gathered that, in general, with increasing settlement density an increase in the groundwater temperature (cf. fig. 5) can be registered.

The following table distinguishes the temperature of the neutral zone in the different settlement areas.

This map presents the groundwater temperature distribution in the city area of Berlin with the reference horizon at sea level. The corresponding dependence of the position in the glacial valleys or the plateaus is 30 – 60 m (cf. fig. 3). In this depth there are no daily and yearly influence of temperature fluctuation.

The heavily built on and sealed city center is surrounded by the 11,5°C isoline. Inside this area are (known from local investigations) points that exceed 12°C. The highest measured temperatures are near the cooling water discharge of the heat power station. Outside of the city center there is a correlation between high temperature and high soil sealing (cf. map 01.02, SenStadUm, 1993a) for example near the center and industrial areas.

The observed temperature anomalies in the southwest of the city is also striking. They may be a result of the closed down Wannsee landfill that produces heat through decomposition.

Below the extended forest-areas in the outskirts-area of southeast, west and northwest, the temperatures are < 10 °C. Furthermore, negative temperature-anomalies of under 10 °C exist within this area, characterized by a high degree of vegetation. So, two large green areas are noticeable to the south of the city center.

Densely settled areas have a groundwater temperature that is more than 2°C higher than areas free from settlement.

Among other things, the near surface groundwater-temperature-distribution in the city area shows a connection with the distribution of industry-settlements, waste heat production, surface sealing, free areas and the entry of heated surface water through influent situations. Under consideration of the groundwater flow field, one can assume that these factors have an essential influence on the change of the groundwater temperature (Blobelt, 1999). Since an accumulation of these factors occurs normally in the city, the factors of influence mutually overlap.

Altogether the results of the temperature measurements show that the groundwater has clearly warmed in the city of Berlin especially in the central area. The long-term cause of this is the onward urbanization, with its profound heating of the near surface ground and consequently of the groundwater.