The application of numerical simulation models requires acquisition of basic data and of meteorological ancillary conditions in a territory extending beyond the actual investigation area. This is designed to assure that the model can “swing itself into place”, so as to be able to simulate conditions as realistically as possible at the margins of the actual project area (for the methodology of the FITNAH climate model used here, (cf. Methodology / Supplementary Notes ). Hence, the investigation area consists of two major components: the approx. 890 km2 area of the city of Berlin, and an approx. 900 km2 area in the suburbs (cf. Fig. 2). 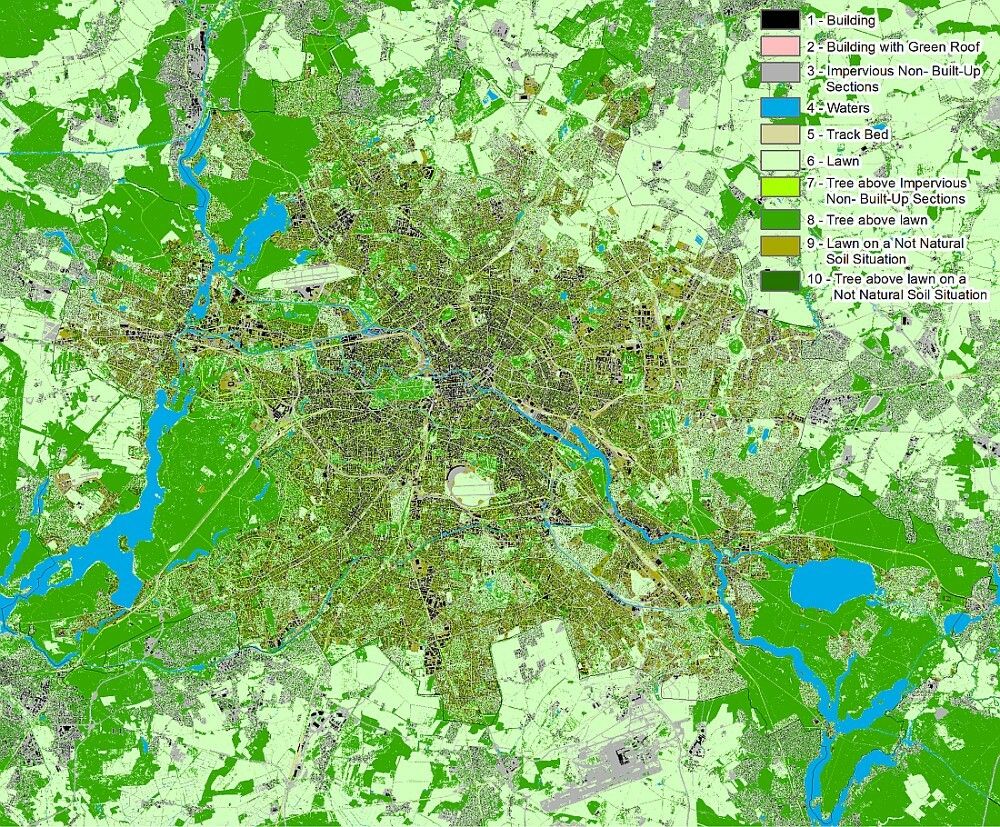 Fig. 2: Expansion of the investigation area (1,800 km²) and classification of the land use for model application. A key with 10 usage classes is used, which is adjusted to the requirements of the model FITNAH 3D.
Image: Umweltatlas Berlin

The quality of the model results depends decisively on the degree of detail of the input data. Till now, the block-based data of the Urban and Environmental Information System (ISU) were used primarily for climatic model applications. The digital block map ISU5_UA 2010 in the scale 1:5,000 represents the reference areas for the information related to block (partial areas), amongst others, for the real area usage and for degree of sealing (SenStadt 2010, SenStadtUm 2012) and is hence a suitable basis for meso-scale modelling in a resolution of 50 m x 50 m. However, this screen size of each 2,500m2 also implies that small-scale input data, such as the building data of the automated land register map (ALK) used for the currently present version of the model application (see Fig. 3, SenStadtUm 2015b) cannot be linked adequately resolved. Consequently, for the screen resolution of 10 m x 10 m established in the limiting area between the micro-scale and the meso-scale, an extended approach for including small-scale usage data became necessary. 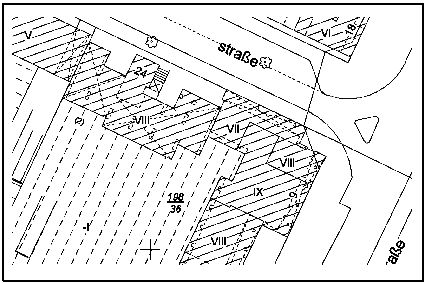 Corresponding preliminary work for equipping this project with land use and vegetation data having very high degree of detail could be done with the elaboration of the map 06.10 “Building and vegetation heights” (SenStadtUm 2014). Along with the actual object data: ‘Area size’, ‘maximum, minimum and mean height’ as well as ‘Use according to object type catalogue of ALK’ and ‘Greening of the roof yes/no’, the technical data entered for the individual buildings and vegetation objects also enable links to the official building codes as well as to the block (partial) area codes of ISU5_UA 2010. Over and above the stock of around 540,000 ALK building objects (as on 06/2014), from the mentioned stock of building and vegetation height entries approx. 70,000 additional building objects like scales, garages, leaves and other non-ALK objects could also be considered.

Owing to their degree of detail, this data represents the decisive basis for the present climate modelling with a resolution of 10 m. The most important geo-basis data are summarised in Fig. 4. 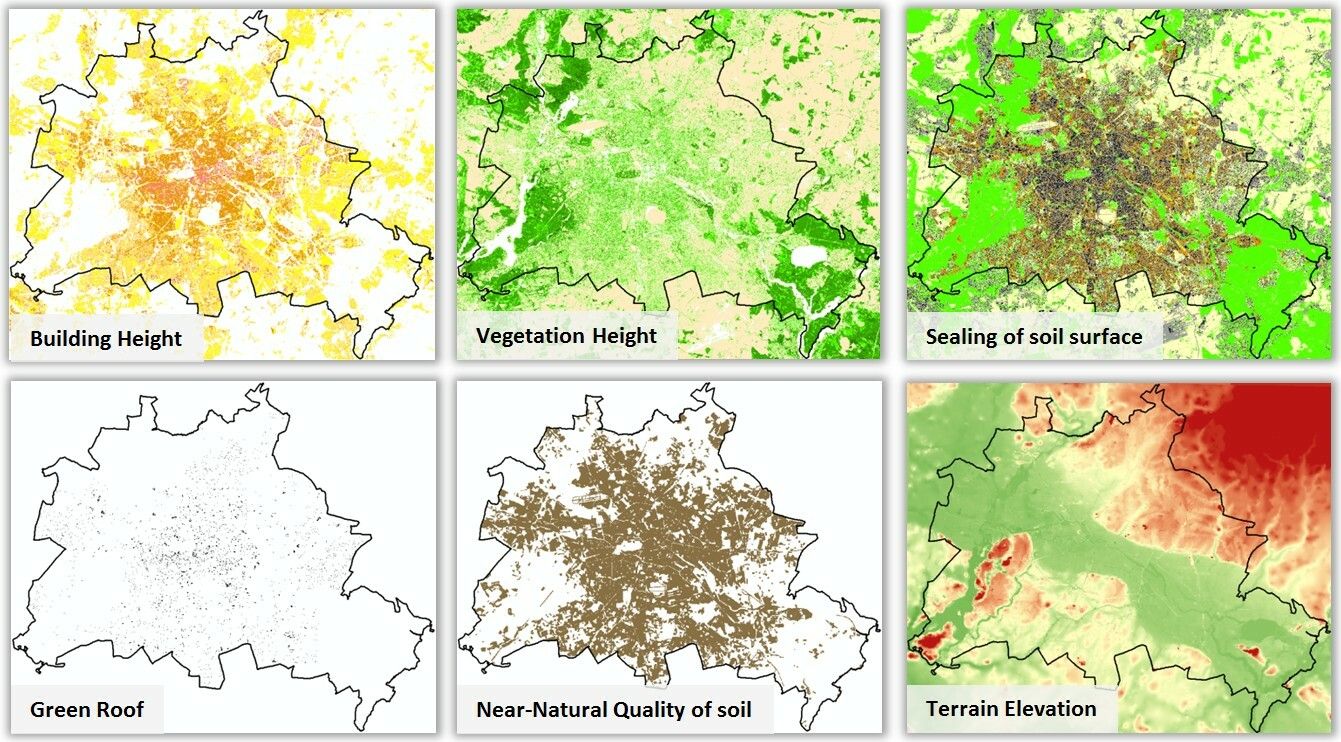 On the whole, the application of the climate model Berlin in its current version, is based on the following components building upon one another:

Following data bases were used for conducting the process steps 2 and 3:

Model calculations use grid-based representations of input variables. For providing the model input data, therefore, the area geometry had to be transferred to 10 m x 10 m grid cells each with a uniform usage structure. This was done in a multi-staged query cascade, which is shown in Fig. 5. In partial areas, the described model input data were supplemented by usage information of the Urban and Environmental Information System (ISU) or by the vector data of the block map 1:5,000 (ISU5_UA 2010). This mainly concerns the information about water bodies, for road space and track areas. While high resolution building and vegetation data can also be used for the neighbourhood of Berlin, the sealing information was present only for the urban area of Berlin. More information about the interface structure could be taken from the ALKIS database of National Survey of Brandenburg. 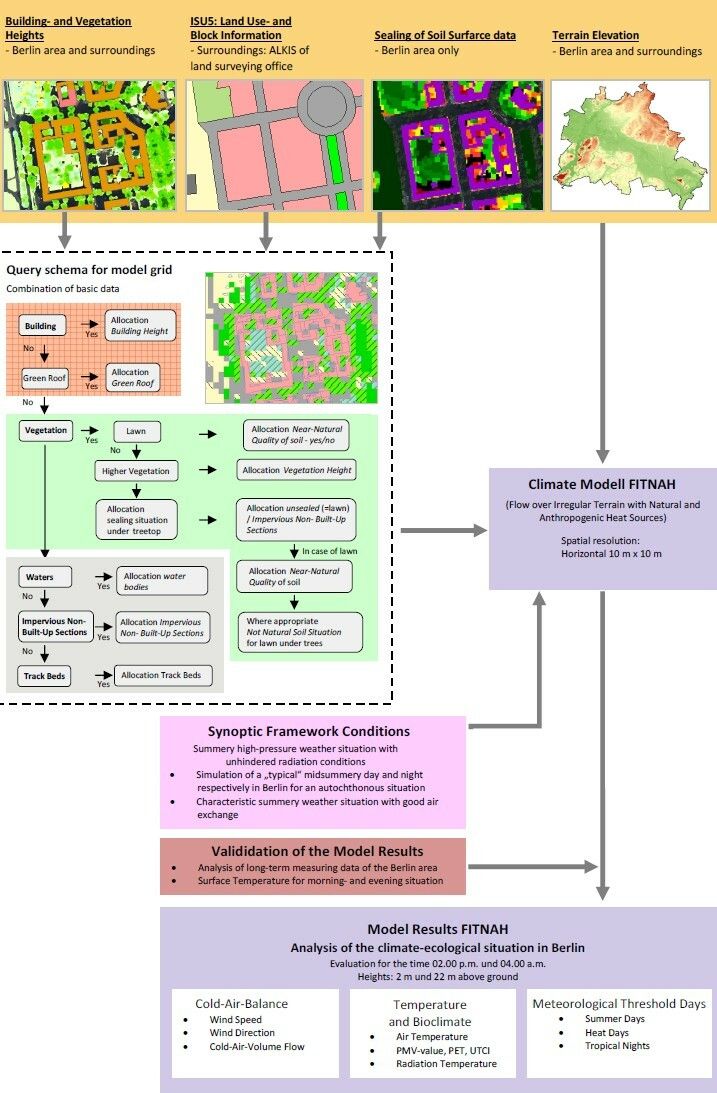