Berlin is characterized by a grown multi central structure with two main centers beside the specific district centers: the areas “Zoologischer Garten” and “Mitte”.

As a rule, population density increases from the city edge toward the city center, however, there are some focal points in the borough centers like Spandau, Tegel and Köpenick. Particularly the region of the central area Mitte, i.e. the area around the eastern Greater Tiergarten and in the north and south of the boulevard Unter den Linden, is predominantly formed by its functions as the governmental area and as a supra regional and significant center for services and commerce. Today, only some blocks remain with more than 70 p/ha. Leipziger Straße and the new residence units on Wilhelmstraße are densely populated and are conspicuous exceptions to general conditions in the eastern city center.

In contrast, the second important city center, located around the Zoologischer Garten and along the Kurfürstendamm, has been preserved largely as a residential area, contributing significantly to the liveliness of the cityscape. Here, a considerable number of blocks still count more than 150-200 p/ha.

The Wilhelminische Ring stands out with a predominately high population density of 351 and more p/ha. The area has a block structure from the Wilhelminian period and is located within and on the edge of the City Rail Circle Line. Maximum values with more than 700 p/ha occur only in 50 of the overall 14,700 blocks and block segments in Berlin. These areas are predominantly located in the boroughs of Neukölln, Kreuzberg and Lichtenberg.

Outside the City Rail Circle Line, the relatively high population density continues south into the Schöneberg, Friedenau, and Steglitz boroughs. A population distribution similar to that within the inner City Rail Circle Line is found in older development areas of Spandau, and is similar to areas such as Tegel, Schöneweide, Adlershof, and Tempelhof, which were developed around the turn of the century, then on the edge of Berlin.

Smaller settlements in Spandau, Lichterfelde, Marienfelde, Waidmannslust, Bohnsdorf and Köpenick, with their post-war high-rise development, stand out with predominantly 151 to 250 p/ha in the generally more sparsely populated city edges. Some locations in this population density class are settlements with block-edge and row development, however. Examples are Haselhorst, Siemensstadt, Zehlendorf, and Plänterwald.

Typical for the city edge, and the most numerous, are relatively thinly populated settlements with 5 to 70 p/ha. These blocks are mainly characterized by structure type 10 (“Low buildings with yards”), extending along the city boundary like a ribbon, excluding undeveloped forest areas or areas of other green uses.

Compared with the Population Density map of 1994 (SenStadtUmTech 1996), an interesting development can be observed at the eastern city border today, almost 25 years later. Because of divisions of real estates in the areas of Biesdorf/Mahlsdorf/Kaulsdorf and in the consequence constructional compressions, the predominant number of blocks are nowadays in the density category of 31-70 p/ha, whereas for the data from December 31, 1994 blocks with less than 30 p/ha are in the majority. Therefore, the eastern border of Berlin is now generally no longer characterized by a lower population density than the western border.

The distribution of population density correlates quite clearly with the Environmental Atlas Map Urban Structure (06.07) (SenStadt 2016). It is apparent that area types can be assigned a certain range of population density. Table 1 shows the average population density for the individual area types with predominantly residential use (share > 75 %) or a share of trade, services and commerce fluctuating between 25-50 %. These calculations apply to areas, both blocks and block segments, of uniform use. 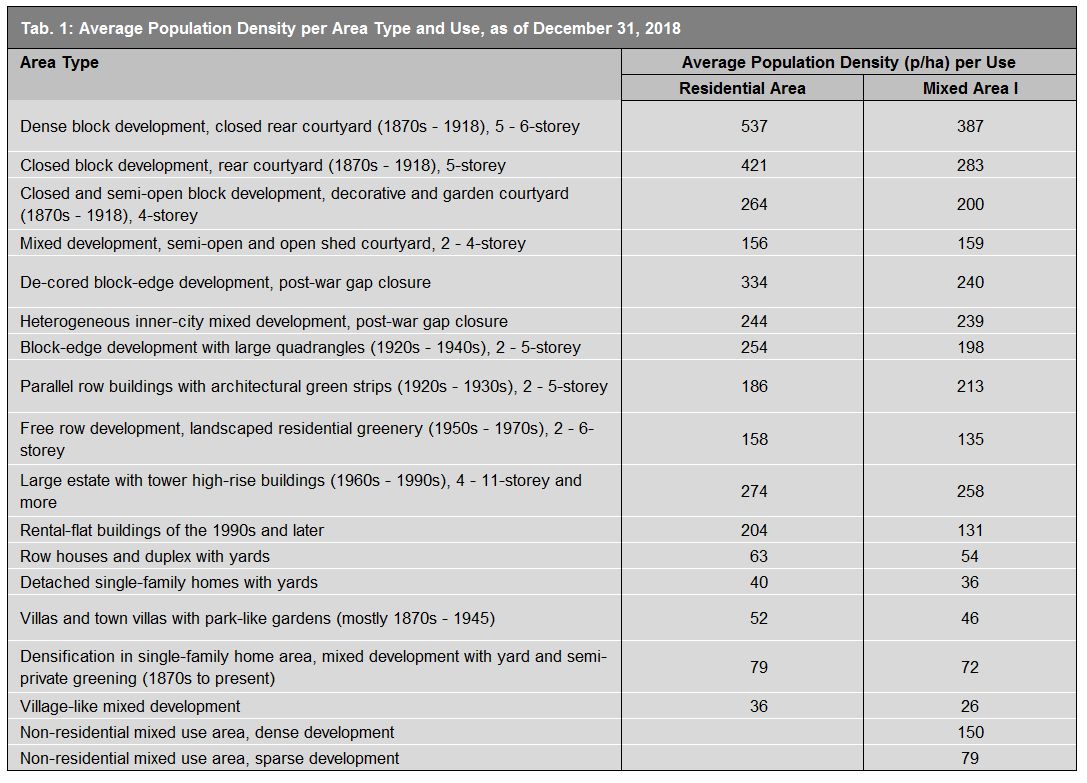 Tab. 1: Average population density per area type and use, as of December 31, 2018
Image: Umweltatlas Berlin

For blocks which are used for multiple purposes, the population density can be displayed with relatively high precision in reference to block segments with uniform use.
Instancing the block north of the Innsbrucker Platz between Belziger Straße / Dominicusstraße and Eisenacher Straße has several block segments, including a cemetery of 1.8 ha and a park of 2.5 ha. By transferring the population data to the remaining segments of the block, the population density of 88 p/ha recorded for the entire block in 1994 increased to 340 p/ha in 2018, thus displaying a much more accurate picture of the situation.

Nevertheless, there are also undivided blocks with different uses, for all cases where these differing uses do not reach a size of one ha. For example, the western part of the block at the corner of Gothaer Str. and Belziger Str. also has a larger utilities area, which was not indicated separately. In light of its inner city location, with only 182 p/ha, it is a rather sparsely populated block. Further blocks with similar population numbers are assigned to the use category “Public service and other special uses”.

Population density development between 2017 and 2018

The population growth Berlin has seen over the last few years has led to a substantial increase in the number of inhabitants within the state. According to the population register, 3,747,936 people were recorded on December 31, 2018; thus exceeding the previous year’s population count by approx. 36,000 people. Overall, most of the inhabited blocks (approx. 14,800 in total) were affected by population changes, compared with the previous year. Relevant changes, both in terms of increased and decreased population values, were observed in about 1,185 blocks and block segment areas.

Fig. 4: Map of Changes in Population Density between 2017 and 2018
Image: Umweltatlas Berlin

Areas displaying more substantial changes in population density (p/ha) within the year – increases of more than 20 p/ha or decreases of more than 10 p/ha – are not distributed evenly across the individual districts or even the whole city. The inner city area (the environmental zone within the City Rail Circle Line), however, was identified as a key area:

Figure 4 illustrates how the affected blocks and block segment areas are distributed across this region.

Blocks with above-average population increases and decreases appear clustered at times. What caused these drastic changes within the period of one year could not be determined in detail. Thus, converting buildings from residential to commercial use may lead to population reductions locally, in the same way that new constructions may increase population numbers, due to gap closures and densification within existing developments.

New construction activity across the entire block plays an important role, leading to considerable population increases, even in as short a period as one year. This is exemplified by the residential construction projects: “Park am Gleisdreieck” (southern part). 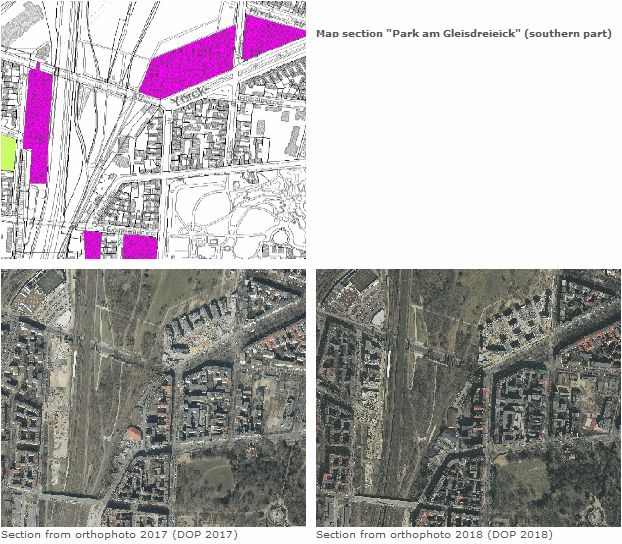 Changes should generally be mapped and studied over a longer period of time. For this purpose, the developments shall be continually recorded and updated here, while annually comparing them to the reference year (2016).