Ground-level emissions from motor vehicle traffic is the most influential factor in the assessment of traffic-related air pollution. Causes and effects are therefore presented in two maps that are closely related:

The original situation is identical in both maps, a description of which may be found in the relevant section of Map 03.11.2.

Nitrogen oxides are acidifiers. They are harmful to human health, cause damage to plants, buildings, and monuments, and contribute significantly to the excessive formation of ground-level ozone and various noxious oxidants during summer heat waves.

Nitrogen oxides, especially nitrogen dioxide, lead to irritation of the mucus membranes of the respiratory passages in people and animals, and can increase the risk of infection (cf. Kühling 1986). Cell mutations have also been observed (BMUNR 1987). Various epidemiological studies have shown a correlation between the deterioration of the functions of the lungs, respiratory tract symptoms, and increased nitrogen dioxide levels (see Nowak et al. 1994).

Diesel soot is a major component of particulate matter (PM10) in motor vehicle exhaust. It is a carrier for polycyclic aromatic hydrocarbons (PAH), a carcinogen, but also on its own, it is a possible cause of lung and bladder cancer (see Kalker 1993). Moreover, such ultra-fine particulate as diesel soot, smaller than 0.1 µm, is suspected to increase the risk of cardiovascular disease.

An evaluation of air pollution from motor vehicle traffic has only become concretely possible for immission control authorities since 1985, since the European Community, in the Directive of the Council of 7 March 1985 on Air Quality Standards for Nitrogen Dioxide (Directive 85/203/EEC), specified limits and goals for this pollutant. In addition, it stipulated that measurements be taken of concentrations of nitrogen dioxide on “urban canyons” and major intersections.

In 1996, due to a multiplicity of new findings regarding this and other air pollutants, “Directive 96/62/EC on Ambient Air Quality Assessment and Management (the so-called “Framework Directive”) was drafted and brought into force.
In this Directive, the Commission is called upon to submit, within a specified time period, so-called “subsidiary directives” stipulating limits and details for the measurement and assessment of a specified list of components.

Since then, four subsidiary directives have come into force:

Germany had two years to enact the first two subsidiary directives into national law, a deadline it missed substantially, as the Seventh Amendment to the Federal Immissions Protection Law (BImSchG), which addressed the first subsidiary directive, was not enacted until September 2002. The new Ozone Directive has now also been enacted into German law with the new 33rd Ordinance of the BImSchG.

The core elements of the Air Quality Directives are the immission limit values, which are “to be attained within a given period and not to be exceeded once attained”. The pollution concentrations, and the time in which the limits must be met, are stipulated in the subsidiary directives, and in the 22nd Ordinance of the BImSchG (22nd BlmSchV).

Table 1 shows the corresponding values for the air pollutants which pose the greatest potential problem for Berlin: PM2.5, PM10 and nitrogen dioxide. 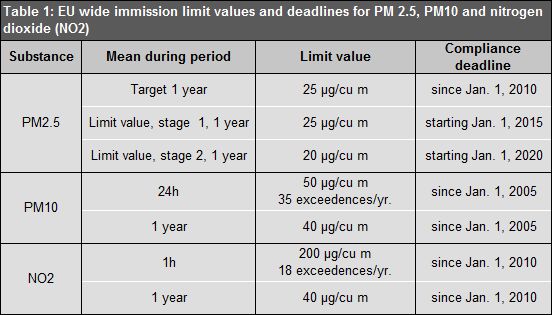 Table 1: EU-wide immission limit values and deadlines for PM2.5, PM10 and nitrogen dioxide (NO2), as per the 39th BlmSchV
Image: Umweltatlas Berlin

At the European level, EU Directive 2008/50 governs the assessment of air quality based on established limit and target values for all relevant pollutants, including the establishment of common methods and criteria. For the first time, air quality values have been established for the particularly harmful small particulate matter (diam. < 2.5 micrometres; PM2.5).

At the national level, the 39th Federal Immissions Protection Ordinance (BImSchV) on air quality standards and emissions limits governs the implementation of EU Air Quality Directive 2008/50/EC. At the same time, the Ordinance on Immission Values for Atmospheric Pollutants (22 BImSchV) and the Regulation for the Reduction of Summer Smog, Acidification and Nutrient Inputs (33 BImSchV) have been superseded by the 39th BImSchV.

Under §11 of the 39th BlmSchV, Berlin is a metropolitan area in which the air quality must be evaluated annually and, if necessary, measures must be taken to comply with the limits. The entire city was designated as a planning area for the possible establishment of a plan to preserve air quality. Exceeding of the limits occurs throughout the city, especially on primary roads. It therefore makes no sense to limit the planning area to parts of the city, or to divide the city into several planning areas.

Problems in applying Directive 99/30/EC and the 39th BImSchV, using the example of PM10 pollution in the city

In the proximity of high pollution immission, such as on urban canyons, high concentrations of immission occur. Unlike in most industrial areas, there are many people on traffic filled streets, be they residents, customers or workers, who face increased exposure to pollution. In order to meet the EU Directives to comply with emission limits at the locations of the highest concentrations, quantification of harmful pollutants must be as complete as possible. For this purpose, such measurements have in Berlin been supplemented by model calculations for all high-traffic streets in which limits could potentially be exceeded.

However, even on a high-traffic urban canyon, the existing pollution produced by other sources in the city, and introduced by the long distance transportation of pollution, is an important factor. Therefore, for the planning of measures to improve air quality in Berlin, a system of models was used, which can calculate the wide-ranging influence of distant sources, as well as the effect of all emitters within the city, even on high-traffic urban canyons. The model uses the levels:

The simplified diagram shown in Figure 1, which shows the spatial distribution of PM10 concentrations in Berlin and the surrounding area, was developed from these investigations of the source of particulate matter pollution in Berlin. 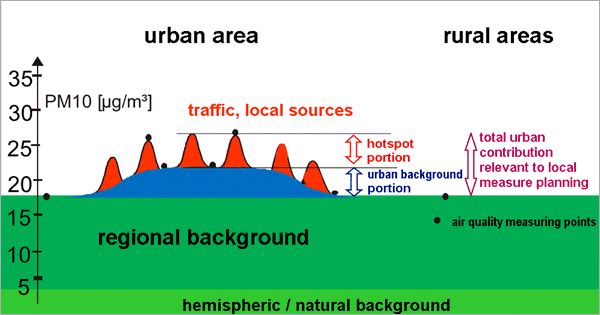 Fig. 1: Diagram showing the pattern of particulate (PM10) pollution in Berlin and the surrounding area
Image: SenUVK 2016a

There is a broadly distributed background level (green area of chart) which, according to measurements taken at several rural stations in Brandenburg in 2016, amounts to almost 16 µg/m3. The component, known as the “regional background pollution”, is distributed relatively evenly outside of the city, as the results of the large-scale model show.

Added to that is the proportion of PM10 pollution caused by local Berlin-based sources. It includes:

In summary for Berlin, more than half of the PM10 pollution measured at stations near traffic in the inner city comes from the regional background and the other locally caused particulate pollution. That portion is in turn equally divided between the amounts produced by local traffic, and those produced by the pollution sources in the remainder of the city. Only this last share can be influenced by local measures in Berlin.