Data from 151 sampled waters were evaluated for updating the Berlin Environmental Atlas. In order to use this data for evaluation, it is necessary to develop an idea of which fish fauna are capable of surviving under given conditions, and can thus be expected to be found. The difference between the potential and actual number of existing species can serve as a starting point for the evaluation of how near a body of water is to natural conditions. A wide variety of scientific publications deal with the theoretical and practical range of fish species which can be expected to be found in a body of water, from geological, geomorphological, fauna and fishing points of view. Common to all of these viewpoints is that the number of fish species depends on the structural diversity of the habitat, and thus directly on the type of body of water. Lakes with outflow, for example, have both running as well as still water areas. They offer suitable habitat conditions for both lotic, rheophillic (preferring strong currents) and lentic limnophillic (still water) fish species. River lake lowlands accommodate a diverse spectrum of fish species. Only lentic, limnophillic species find optimal habitat conditions in still lakes. In rivers, usually only lotic, rheophillic species. The number of fish species expected in stillwater types is thus less than in river-fed lakes.

Nine categories were made for the comparison of Berlin bodies of water:

It was necessary to divide lakes into natural and manmade categories because the former can be naturally populated and fish stocks in the latter are due to stocking. Retention basins and sewage treatment plant discharges as manmade small bodies of water, whether still or flowing, were also given their own category, for they usually prove to have the highest constructed condition. The number of sampled bodies of water for each category is given in Table 2. 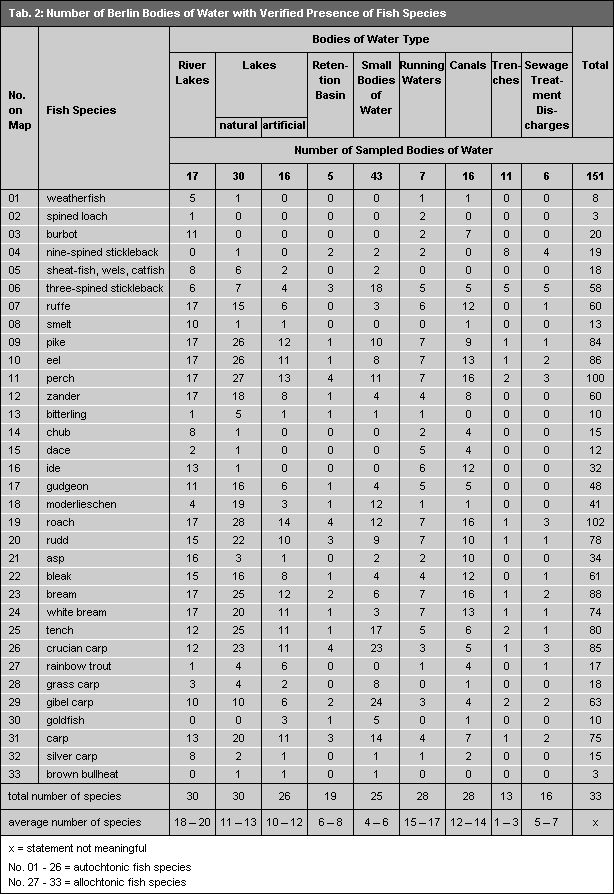 The average of fish species detected was computed for all bodies of water of a type. This took into account species clearly stocked, in as far as they are considered to be indigenous or not. This value ±1 was set as the range for average number of fish species for this type of bodies of water in Berlin (cf. Tab. 2). Because a large number of fish species may usually be inferred as indicating a diversely structured and thus ecologically valuable habitat, deviations from the average were evaluated as positive when the number was greater, and as negative when the number was lesser.

The average value is only an aid for comparison of Berlin bodies of water to each other. It is not a scientifically based, generally valid evaluation. It should be basically noted that a body of water with relatively few fish species (compared to waters of the same type) is not necessarily to be estimated as poor. It can be a very valuable biotope (for fish too) anyway. On the other hand, the existence of relatively many fish species could be due to restocking measures, so this bodies of water cannot simply be evaluated as good without reservations. But the map does show which bodies of water within a group in reference to their fish fauna are richer in fish species and thus usually more diverse.

Sewage farm trenches were assigned their own category and positively evaluated bodies of water are to be found here too, based on the number of fish species. This should not conceal the fact that this category consists of unnatural waters detrimental to fish. These waters are little deserving of protection in this condition. An example is the Panke. Eighty years ago the course of the Panke was a richly sectioned stream accommodating pond lamprey. The Panke was then reformed into a straight conduit with a trapezoid cross-section. It has been damaged by human intervention, regardless of the number of fish species which can be found there today.

The map gives information about the number of verified fish species, their relative frequency, and their degree of endangerment, in each investigated body of water. The existence of a fish species which was observed only irregularly and as an individual specimen in the course of several samplings of a body of water was classified as seldom. A species regularly captured, but only in relatively small numbers, was classified as low. Many species were found to be present in larger quantities in all samples.