The analysis of the stock of green space covered all green spaces in the area of the city with recreational potential.

In addition, the Britz Garden, the Marzahn Recreational Park, and facilities of the Foundation for the Prussian Palaces and Gardens in Berlin and in Brandenburg, the Charlottenburg Palace grounds and Glienicke Park have been included. The Botanical Garden and the two Zoos have not been included in the availability analysis.

The Britz Garden in Neukölln and the Recreational Park in Marzahn are two exceptional cases in the evaluation. Both green spaces have limited accessibility due to the fact that an entry fee is charged; moreover, they are not under the responsibility of the green space agencies. Due to their important recreational functions and the relatively low amount of their entry fees, they have nonetheless been assigned to the category of unrestrictedly usable green space.

The Berlin forest areas have been included, so as to ascertain the residential blocks in the intake areas near the forests and the edges of the forests.

The following criteria were used for the assessment:

Based on the map of Dedicated Public Green and Recreational Facilities (Senate Department for Urban Development I C 2, as of Dec. 31, 2011), all green spaces found to be usable were assigned an intake area (green facilities in adjacent areas in the state of Brandenburg were not taken into account).The intake areas were determined by means of a circle drawn automatically around the respective open space, with the distance determined as the crow flies. To compensate for the difference between this distance and the actual distance to the green space, approx. 10% was subtracted from the maximum distance. Thus, a radius of 450 m resulted for near-residential open spaces. Only complete blocs with residential use were used in the calculation.

For smaller facilities, the centre was chosen as the point of origin of the radius; for larger spaces, the entrance area was used (approx. 100 m inside the open space). The intake area calculated for near-residential green space, for a distance of between 300 and 500 m around that green space, took only complete blocks and block segments into account.

Since the accessibility of a green space can be reduced by psychological or physical barriers, these were addressed next. Barriers include e.g. rivers and canals, railroad lines, airports and motorways. If such barriers exist around a green space, the intake area was corrected.

Wooded areas were also assigned an intake area. It was assumed that the edges of forests can to some extent assume the functions of a near-residential open space. Forest edges were evaluated so highly as recreational areas that throughout Berlin, blocks in an intake area of 500 m from forest areas were categorized as having green space available.

The same was done in some cases even for well-structured farmland areas, or other high-quality open spaces (e.g., Gatow, Großglienicker Weg or Krugpfuhl Blankenfelde); these were likewise categorized as provided with green space, and were assigned an intake area.

Recreational use of agricultural areas is possible only to a limited degree, and only in some parts of the area; however, in the Berlin portion of the Barnim region, the areas accessible by footpath were included in the assessment. For this developing near-urban recreational area, the agricultural segments of the planned park landscape are important.

For the calculation of the respective degree of availability, the number of inhabitants in the intake area of a green space was divided by the size (the calculated population by the sq m of green space).

For the block and segment-based calculation of the availability of green space, all blocks were included in which more than 10 inhabitants/ha live. This so-called population threshold was established for the planning process to ensure theat the automated analysis also considered the population of areas with structure types with predominantly commercial, services, trades and industry, and those with “other uses”, without however including building supervisors (caretakers) or security personel in purely industrial areas. This established planning value has been halved since the 2009 Edition, from 20 inhabitants to 10. In this way, more inhabited blocks could be included, especially in inner-city locations with key metropolitan use types, or mixed-use areas (see Figure 2).

The map with the matrix of the degree of availability of public green space was superimposed on a map of the building structure of residential areas, and thus provides further insight into the availability situation. It shows the relationship between public and private availability of open space.

In order to ascertain not only the availability of public green areas to the population, but also that of private green space, the urban structure recorded in the Environmental Atlas was divided into three structure types with different proportions of private open space (see the gradations high – medium -low in the legend). Examples of these respective types include single-family home areas, row-house neighbourhoods, and the imperial-era residential blocks of the inner city. 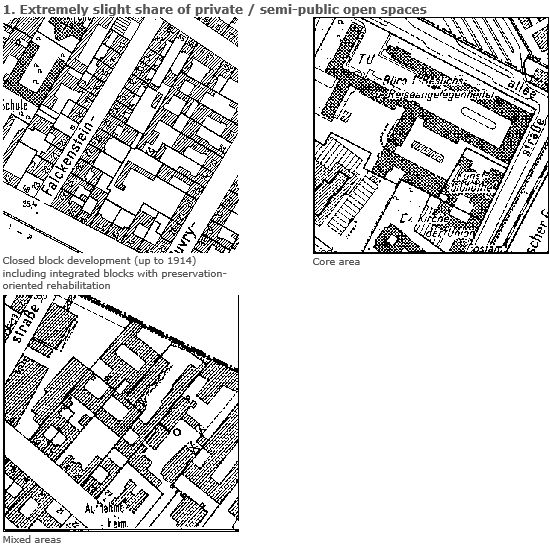 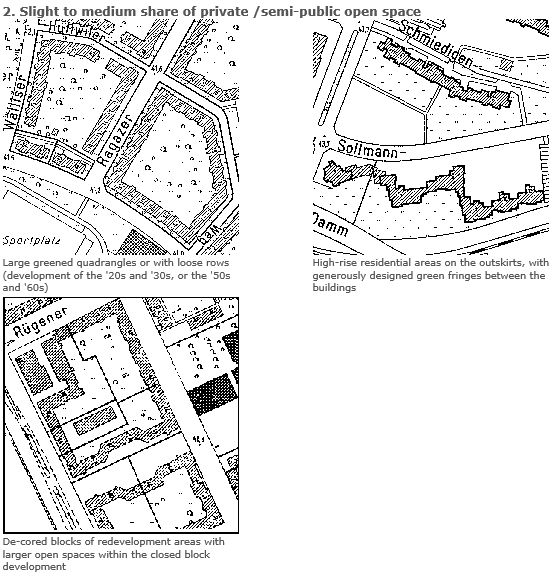 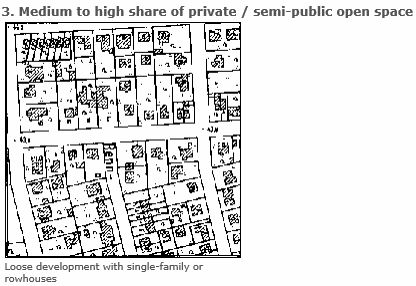 For the block-referenced calculation of the supply of green spaces, all blocks were included in which more than twenty inhabitants/ ha lived. This so-called inhabitant threshold value has been established as part of the planning proces to also consider in the automated analysis those inhabitants in areas with structure types predominantly used by commercial, services, and industry, and structure types with other uses, without having to go so far as to count every single building superintendant in areas which are purely industrial.

Another unusual feature arises from the use of the Urban Structure Map 2001 (2005 Edition) with the simultaneous assignment of the inhabitant data from 2004: in some areas, considerable increases in population could be ascertained between 2001 and 2004 in areas which, on the Urban Structure map, are still classified as non-built-up or minimally built-up green and open areas; an example is the Spree Bend area north of Helmholtzstraße.These inhabitants, too, are incorporated into the analysis via the categorical analysis of all blocks with more than twenty inhabitants.