In the ERDF project 027 “GIS-based modelling of parameters relevant to urban climate on the basis of high-resolution data on buildings and vegetation”, the characteristic spatial distribution of the summer minimum and maximum temperatures in Berlin and its surroundings was already simulated based on a model, statistically analysed and published as a separate topic with respect to the summer threshold days of the past decade 2001-2010 (SenStadtUm 2015, 2016).

The work steps and analyses described here in the following build on this. This text contains only a selection of the tables and figures created in the framework of the project. All analyses for this map can be downloaded in a single archive: Entire analysis of the Berlin climate stations (zip; 49 MB).

As described, the methodological approach (described in detail in GEO-NET 2016) was based on the insight that the urban temperature conditions (always referred to the official measurement height of 2 m above ground in the following) are determined by the predominant weather conditions on the one hand and by the location of an area within the municipal area on the other. The combination of the available results of the detailed comprehensive modelling at selected points in time with the station results of measuring points in long-term operation thus allows conclusions to be drawn about the temperature behaviour of arbitrary sites also at points in time other than the ones modelled. The temperature differences of all areas with respect to the reference stations can be determined, which in turn represent different characteristic urban use structures situated in the surroundings of the measuring instruments (cf. Fig. 1). The influence of this location effect particularly on the nocturnal minimum temperatures is illustrated in Figure 2. 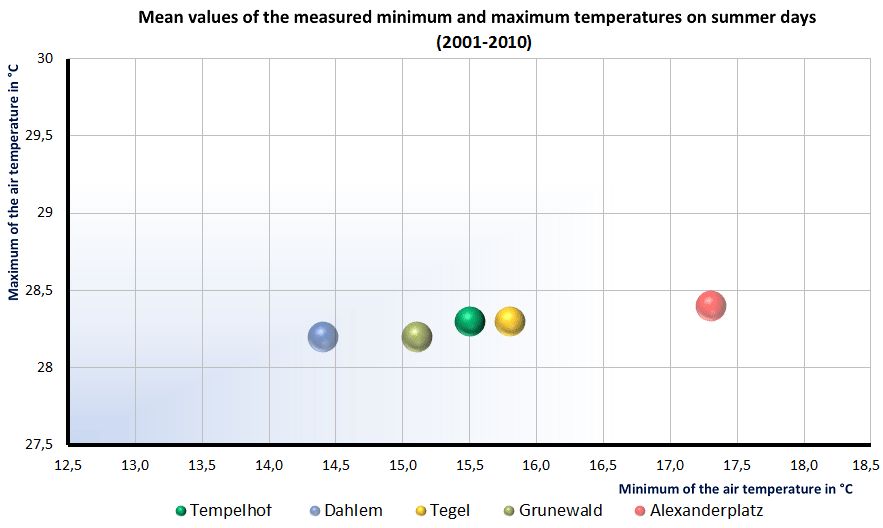 Figure 3 shows the principal history of the frequencies of tropical nights, summer days and hot days derived from the 30-year measurement series from 1981 to 2010 as a function of the temperature deviations of the minimum and maximum temperatures from the values at the reference site, the Tempelhof station. While the analyses of the measurements show that the number of tropical nights and hot days as a function of the temperature deviations follow a power law, the frequencies of summer days exhibit a nearly linear relationship with the temperature difference with respect to the reference site in the data range analysed. The knowledge of these relationships was implemented in a first step in that all blocks and block segments of the block map 1 : 5,000 (ISU5) were assigned frequencies of the three threshold days for the “actual state” time period 2001 – 2010. The result is part of the analysis maps for applying the climate model 2015 (SenStadtUm 2016, direct link to the map in the Geoportal). 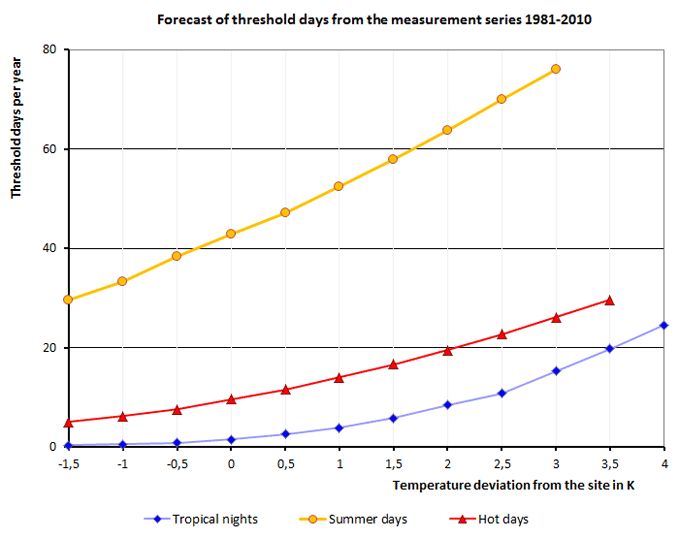 Fig. 3: Estimation of the frequencies of tropical nights, hot and summer days as a function of different temperature deviations from the Tempelhof reference station.
Image: GEO-NET 2016

To forecast the development of the number of threshold days in the future (time periods 2011-2040 and 2041-2070), the statistical analyses were extended using the available station-specific temperature time series of the WETTREG-2010 Scenario A1B (CEC-Potsdam n.d.). This scenario dates back to the 4th Assessment Report of the IPCC (IPCC 2007) and is meanwhile being extended by the slightly more pessimistic, more emission-intensive Scenario RCP8.5 (IPCC 2014), which was used for the calculations in the framework of Berlin’s Concept for Adaptation to the Impacts of Climate Change (Reusswig, Becker et al. 2016).

The stipulated conditions of any emission scenario necessarily contain imponderables, especially for the more distant future, with respect to the development of the individual underlying parameters, e.g. the economic development or population growth. The Scenario A1B used here, and likewise the Scenario RCP8.5 being used meanwhile, are so-called business-as-usual scenarios, which assume a form of economic trade and of energy use for the future that deviates little from the current state. A further influencing factor whose future form is unknown is the urban development of Berlin, i.e. the distribution of built-up and greened areas in the future. As no reliable information is available in this regard for the time periods under consideration, an unmodified urban structure was necessarily assumed.

These influencing factors and restrictions are to be taken into account in particular in assessing the differences in the forecast absolute values and in their temporal development. It is further to be noted that in this study, hot days are simultaneously also counted as summer days.

Thus it was possible to make the simplifying assumption for the calculations that the relative temperature differences between individual use structures in the city under summerly high-pressure conditions will remain essentially unchanged also in the future.

Three time periods were selected for the forecast of the future development:

Figure 4 shows the forecast based on the WETTREG 2010 A1B scenario with respect to the development of the frequencies of tropical nights at three Berlin stations with a long-term uninterrupted measurement series. As the climatic influences of the site have a particularly strong effect during the nighttime cooling phases, the depicted development of the number of tropical nights provides a particularly incisive illustration of the climate change-related temperature increase to be expected. The project report (GEO-NET 2016) also contains station-specific statements on the development of the frost days. A spatial representation for the municipal area is not possible, as the model simulations can only be used for summerly weather conditions. The corresponding tables and figures are also contained in the zip archive available for download: Entire analysis of the Berlin climate stations (49 MB) .