As a rule, population density increases from the city edge to the city center. In the city center itself, however, only up to 70 p/ha are found in most blocks. Factors for this are the large open areas of the Tiergarten park and the Zoo, trade and service centers, and the large number of construction sites. Leipziger Strasse (street) and the new residence units on Wilhelmstrasse are densely populated and are conspicuous exceptions to general conditions in the city center.

The Wilhelminische Ring stands out with a “predominately high population density of 351 and more p/ha”. The area has a block structure from the late 19th-century and is located within and on the edge of the City Rail Circle line. There are peak values of 793-796 p/ha in the Neukölln, Kreuzberg and Charlottenburg boroughs. Outside the City Rail Circle line, the relatively high population density continues south into the Schöneberg, Friedenau, and Steglitz boroughs. Population distribution similar to that within the inner City Rail Circle line is found in older development areas of Spandau, and is similar to other areas such as Tegel, Schöneweide, Adlershof, and Tempelhof. When these areas were developed around the turn of the century, they were on the edge of Berlin. They were later incorporated into Berlin.

The high-rise and industrially-prefabricated settlements at the edge of the city are relatively densely populated with 151 to more than 550 p/ha in large block areas. These are Märkisches Viertel, Hohenschönhausen, Marzahn, Hellersdorf, and Gropiusstadt. 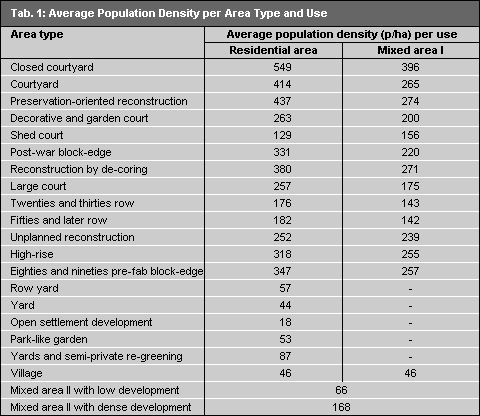 The population density of non-uniform use blocks can vary greatly from the average values of their assigned class. One example is the area north of Innsbrucker Platz, along the Hauptstrasse in the Schöneberg borough. Population density values for this area range from 88 to 638 p/ha for blocks of the area type “closed courtyard”, “courtyard”, and “preservation-oriented reconstruction”. The averages for these types are 549, 414, and 437 p/ha. One factor is that population density calculations are based on the entire block, but different uses within a block may not have been taken into consideration. Besides “residential” use, the block with “88 p/ha” also has public buildings, such as schools, public library, a police station, and a public park. One block with only 191 p/ha has a larger utilities area. Other blocks with values of 219, 261, and 282 p/ha have Mixed Area 1 use. The block with 638 p/ha is solely residential.