Due to their close interrelationship, the present text will explain the two maps 07.02 Traffic Noise and 07.04 for Railway Noise together.

These maps constitute an update of the data of the 1993-‘94 (cf. Map 07.02, Edition 1997). In addition to a representation of noise pollution due to cars, trucks, busses and streetcars, it also contains a separate representation of noise emissions from local rapid-rail and main-line railroad traffic, as well as from aboveground subway line segments.

Noise has become a permanent component of our lives, especially in major cities like Berlin. The various forms of activity in the compact area of a city – residential, commercial, transportation, etc. – almost inevitably lead to conflicts as to what is a reasonable or unreasonable level of noise. Transportation, and particularly the volume of vehicular traffic, is the main cause. During the past few years, the realization that noise is an increasingly serious ecological hazard has therefore gained ever wider acceptance. Noise can have direct or indirect effects on the well-being and even on the health of individuals. The results of noise-effect research indicate that at daytime evaluation levels of between 55 and 60 dB (A), the burdensomeness of traffic noise rises, that it increases substantially between 60 and 65 dB (A), and that health risks presumably start as of 65 dB (A); these are significantly substantiated at daytime levels over 70 dB (A). The noise effect researchers of the Federal Environmental Protection Agency consider nighttime noise impact in excess of 55 dB (A) to be the reason for damaging effects on health, because sleeplessness is a particularly serious burden on the cardiovascular system (cf. Ising et al., 1997).

How Does Noise Occur?

The range of pressure variations perceptible by the human ear (vibration amplitude or sound volume) is between 20 µPa (audio threshold) and 200,000,000 µPa (pain threshold). The micropascal (µPa) is the unit of measurement for this pressure. 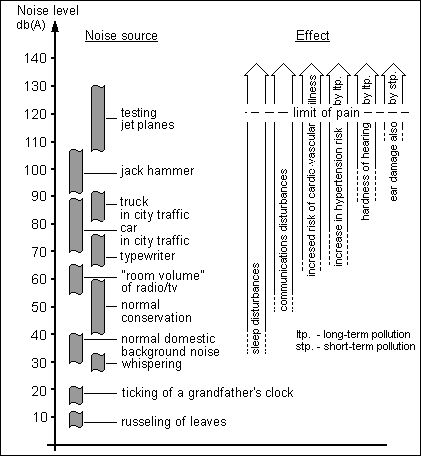 The decibel scale, which describes the “sound pressure level,” is therefore not an absolute unit of measurement, such as i.e. the gram or the meter. Rather, it only specifies the relationship to the audio threshold, i.e. it tells us by how much a sound exceeds the audio threshold.

As a rule, sounds consist of a mixture of high, medium and low-frequency segments. The human ear perceives these frequency segments with various degrees of sensitivity. In order to reflect these properties of the ear, measuring devices are equipped with acoustic filters. for the usual ambient noise, the acoustic filter provides the best correspondence between the ear and the measuring device. The corrected sound volume is therefore given in “dB(A).”

The sounds which occur in our environment, including e.g. traffic noise, are rarely uniform. Rather, they exhibit fluctuation over the short term as well as in the course of the day or a week (c.f. Map 07.01 Traffic Volume, Edition 2001).

Therefore, to assess and compare sounds, it is practical to use a “mean value,” which is an average of the sound volume level occurrence.

In other words: a sound fluctuating within a particular time segment is replaced by a constant sound with a constant volume level and equivalent energy. The “assessment level” is also called the “energy equivalent constant sound volume”. Thus, the mean volume is not to be understood as an arithmetic average, but as corresponding to a physically equivalent energy average. This procedure allows peak noise to be given special consideration.

The logarithmic laws are applied to calculations with sound volume. Thus e.g., the doubling of the number of similarly loud sound sources (motor vehicles) increases the sound volume by 3 dB (equals 10·log 2); a trebling by 5 dB (equals 10·log 3), ten times by 10 dB (10·log 10). A sound with a 10 dB(A) higher level is experienced as being twice as loud.

For comparison with limits or standards, the so-called “evaluation level” is usually given. This is distinguished from the mean or equivalent constant volume in that certain addiciton or subtraction factors are applied to take the various noise perception levels into account. In the case of traffic noise, increased perception levels for braking and acceleration sounds, especially near traffic signals, are taken into account by means of an addition factor.

The empirically demonstrated reduced perception level for rail traffic noise is taken into account by a subtraction factor, the so-called “rail bonus.”

The Federal Immission Protection Law addresses precautions against noise in §§ 41 through 43, i.e. the consideration of noise-prevention interests in new construction, or significant changes in road and rail routes. These regulations have been concretized in the Traffic Noise Prevention Ordinance (16th Federal Immission Protection Ordinance (BImSchV)) and the Transportation Route and Sound Protective Measures Ordinance (24th BImSchV). If in a new construction project, or a project for significant changes in road and rail routes, the prognosis is that the limit values in Table 1 will be exceeded, noise-reduction precautions must be carried out as per these ordinances; as a rule, this means active or passive noise-protective measures.

Existing traffic noise situations are not subject to these regulations.

For roads maintained by the federal government – in Berlin, federal highways and city freeways – noise abatement measures are available pursuant to the “Guidelines for Traffic Noise Control on Federal Highways Subject to Federal Maintenance – VLärmSchR 97” via a voluntary obligation undertaken by the Federal Transportation Minister.

Noise abatement measures, especially the sound-proofing of windows, are possible if the assessment level exceeds the following limits:

The noise abatement measures possible under these guidelines have largely been implemented in Berlin.