In the past, the reduction of emissions from industrial and domestic heating was the main focus of air quality planning. In these segments, sizeable reductions of airborne pollutant emissions could be achieved through extensive rehabilitation programmes and plant closures. Improvements were also achieved in the area of traffic, but nonetheless, traffic is the largest single source of both current and future air pollutants – not only in Berlin – and is the determining factor for the course of future action in air quality planning.

Due to historical development conditions, the spatial residential structure of Berlin and Brandenburg is “traffic-efficient”. No other region in Germany has anywhere near such favourable conditions. Especially characteristic of Berlin are the clearly polycentric structures and the intensive utilization of limited space in the inner city, as well as in the centres on the periphery, with intensive large and small scale multiple uses resulting in a lower degree of suburbanization than in other large cities. Only 20% of the population lives in the surrounding suburbs, whereas for example around 2.5 million inhabitants live in the city region of Frankfurt am Main, of which only slightly more than 710,000 inhabitants are registered within the city limits. However, also in and around Berlin the development of the relations between the city and its surroundings has led to the developments typical for metropolitan areas. Whereas in 2002 only around 123,000 commuters were coming to Berlin daily from the surroundings (= about 10 % of employed persons with mandatory social insurance payments), in mid-2014 there were already 266,000 commuters (= 21 % of employed persons with mandatory social insurance payments). An additional 160,000 Berliners were commuting to the surroundings (AfS 2016). However, compared with other metropolitan areas, this proportion is still relatively low (e.g. in Frankfurt/Main it amounts to around 60% of inbound commuters).

Since reunification, the city of Berlin has been confronted with a considerable increase in traffic. The number of the motor vehicles registered in Berlin increased by 23% between 1989 and 2002, when a high point of 1,440,000 was achieved. This figure has since dropped continuously over the course of several years and is now at 1,387,733 motor vehicles (as of Jan. 1, 2016, cf. Table 1), after a recent upturn.

Table 1: Number of motor vehicles and trailers in the State of Berlin 2006 - 2016 (each reference date: Jan. 1)
Image: according to Statistical Office of Berlin-Brandenburg, Statistical Yearbooks

The traffic volume on the Berlin road network has, however, according to the currently still applicable Emissions Register, decreased only slightly, from 12,641,300,000 vehicle-km in 2005 to 12,055,700,000 vehicle-km in 2009 (see Tab. 4). In future too, moreover, traffic growth is to be expected in road freight transport, which is very impact-intensive; even just the steady increase in the number of registered vehicles of this category suggests this (cf. Tab. 1).

These far-reaching changes have not ended yet. The increase in non-local traffic is caused, among other things, by the continuing expansion of the combined Berlin-Brandenburg residential and commercial area; the intensification of international economic interdependence; and, especially in Berlin, increasing interdependence with Eastern Europe.

The contribution of motor vehicle traffic to air pollutant concentrations: Origins and trends

Berlin’s motor vehicle traffic has for years now been the cause not only of considerable noise immissions in significant problem areas (see also Maps 07.05.1 and 2, Strategic Noise Maps, Road Traffic; 2013 Edition), but also of air pollution, especially since other categories that originally contributed to air pollution have been substantially reduced. Table 2 shows the combined emissions of all of Berlin’s sources of major pollutants since 1989 according to the current state of knowledge.

Since the fall of the Berlin Wall in 1989, many industrial enterprises have been rehabilitated or shut down, and the use of coal for fuel for home furnaces in Berlin’s residential areas has been replaced with heating oil, natural gas, or district heating (cf. Map 08.02.1 Predominant Heating Types, Supply Shares of Individual Energy Carriers; 2010 Edition). In 1989, domestic heating and industry were significant sources of sulphur dioxide and particulate pollutants, but these have been reduced substantially. Between 2000 and 2009, total emissions of nitrogen oxides were reduced by almost 30 %, and of particulate matter by over 20 %. 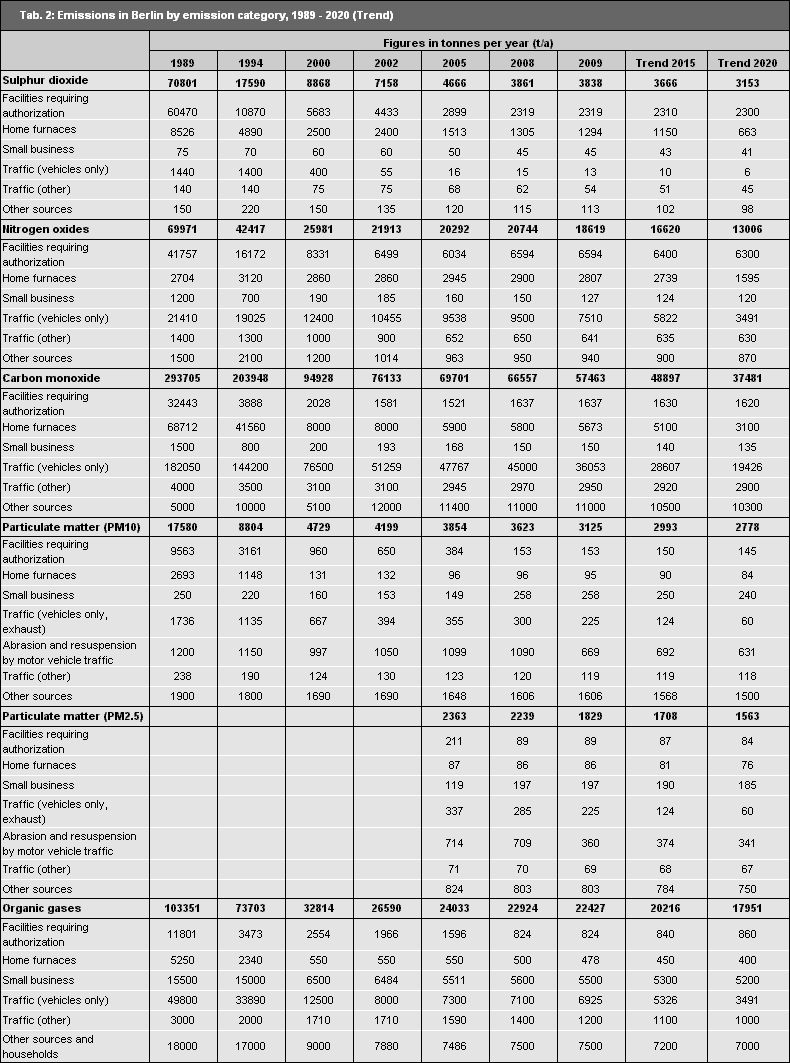 The particulate emissions from motor vehicle exhausts, which are an especially great health threat, also decreased by more than 80 % between 1989 and 2002. The trend calculations indicate further reductions up to the end of the decade. This finding agrees substantially with the measurements of diesel soot detected in so-called “canyon streets” – the major component of motor vehicle exhaust emissions. However, since the particulate matter emissions from abrasion and resuspension of road transport decreased by only 43 % during these 20 years and only slight reductions are predicted for the near future, road traffic is the second greatest source of particulate matter in Berlin, after “other sources”. The calculated decline was based on the use of new, significantly lower emissions factors; in actual fact, the emissions probably declined only commensurately with the decrease in traffic, or by about 10 %. Road traffic, including abrasion and resuspension, in 2009 accounted for 29 % of the particulate emissions of PM10 in Berlin, while “other sources” a counted for 51 % (for PM2.5 particulate matter, the ratio was 32 % to 44 %).

Especially high in relative terms is the pollution from motor vehicle traffic in the inner city, where over one million people live in an area of 100 sq km. If current trends for use of and competition for space continue, motor vehicle traffic will increase especially strongly here. If current conditions continue, freight transport will encounter a particularly major increase in bottlenecks in the streets.

In order to counteract these developments, which are to some extent incompatible with urban living and threatening to public health, two mutually complementary planning strategies have been developed for Berlin:

With the revised Urban Development Plan for Traffic, the Berlin Senate in a resolution of March 29, 2011 presented an updated action plan which combines the possible and necessary steps for the further development of the Berlin traffic system for the coming years with a long term strategic orientation. The core of the action plan is a catalogue of measures that were previously analyzed in detail and coordinated for effectiveness, acceptability and fundability. With regard to the future development of traffic in Berlin and the surrounding area, the investigations for the Berlin Air Quality Plan are based on this long term action concept.

“Health and Safety”, one of the key strategic components of the Urban Development Plan for Traffic, includes a number of important strategies to limit the increase of motor vehicle traffic and its associated effects, with the goal of a reduction of air and noise pollution in the primary road network. The implementation of the measures of the Urban Development Plan for Traffic is expected to be completed by 2015.

Under Europe-wide standards, the Air Quality Plan data must include information on:

The present Air Quality Plan provides information about the legal framework and the prevailing situation, and describes the causes of air pollution. The measures take into account the developments to date of the condition of the air (through 2010), and future trends through 2020. The focal point is the presentation of a range of potential measures and their evaluation. Based on the effectiveness of these measures, a strategy will be developed for the Berlin Air Quality Plan. The Air Quality Plan documents that Berlin, like many other large German and European cities, faces a major challenge to meet the new EU limits.

The essential results can be summarized as follows: the locally generated segment of the pollution, the share which can only be reduced by Berlin measures, accounts for about 36 % of the particulate pollution measured at a main traffic street; it is caused by the urban background (approx. 17 %) and by the local sources from road traffic (approx. 19 %). The urban background pollution share is caused mostly by road traffic (7.5 % of total PM10 pollution). The remainder (9.5 %) is mainly from other sources (approx. 7.5 %, including construction activity with transport, wood burning as additional heating in private households, resuspension through strong wind and the like) as well as from Berlin residential heating and industry and power plants.

The results of the measurements of recent year and the comprehensive model calculations carried out for 2015 lead, among other things, to the following conclusions:

More detailed notes on the effects of air pollutants, the applicable legal regulations and further background information can be found in the accompanying text of the 2011 edition of the Environmental Atlas (SenStadtUm 2011).