The delimited climatic-functional regions shall reveal statements in which areas

The peculiarity of the different climate-ecological parameters were transferred into an appraising classification scheme for a better planning grading. These classifications take place after technical demands and orient themselves in regard to the class width at the value spectrum existing in the investigation area. As below, the qualitative gradation of the determined parameters, subdivided according to the topic tables units, is described. Finally, the grading of structural elements relevant to planning is depicted.

As cool air-producing ranges vegetation-coined open spaces are considered such as forests, parks and graveyards and, in addition, green-coined settlements with a small sealing degree (usually under 30%). For a better handling the approx. 13.500 relevant single areas of the Urban and Environmental Information System (ISU) have been aggregated to approx. 700 functionally with one another connected green area units, whereas the subsumption took place with priority after the aspect of the spatial proximity. Thus several green areas form a matching unit with a minimum size of 0,5 hectares (cp. Fig. 1). 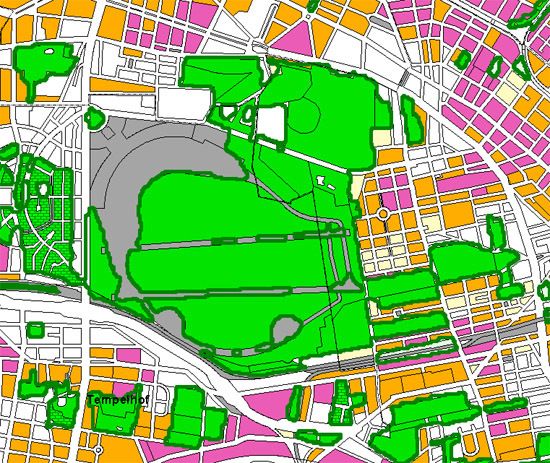 To characterize the balancing performance of green areas within the city as well as the cold air-producing areas of the surrounding countryside the cold air mass flow is adducted in the Climatic Functions Map. It expresses the inflow of cool air from the neighbouring grid cells in 1000 m³/s per 200 m raster cell, as it was determined in the context of the analysis phase of the model application (cf. Map 04.10 Climate Model Berlin (Edition 2003).

Figure 2 illustrates with the example of the Airport Tempelhof the near ground current field, which is used to delimite the affect range of the cold air producing areas. 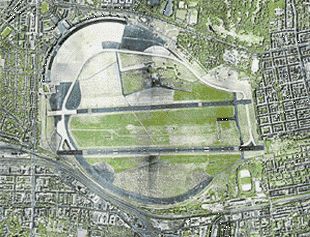 To ensure that the size of the respective green area remains considered in the evaluation, a ratio has been evaluated for the compensation benefit. It consists of an area ratio from a green area to a 200 m grid cell (=40,000 m²) as well as the determined cold air mass flow within this area. An example computation for an area of 19,5 ha and an average mass flow of 3,49 in the green area clarifies the procedure:

The qualitative classification of the values in shown in table 1, whereby for an climate ecologically effective mass flow a value of at least 1 is regarded (cf. table 1).

The ranges of the discharge effects are characterised as “affecting ranges of the cold air generating surfaces” in the Climate Functions Map and are explained under the column of residential areas.

The planning classification of a cold air producing green area in the Planning Advices Urban Climate Map is primarily determined by its location in the city and its proximity to burdened settlement areas. The sensitivity of an intensification of use comes along with the climatic relevance for the assigned residential areas (cp. table 2).

For areas with an urban climate importance of “very high” a maximum of sensitivity against housing, parcelling and sealing is given; they have to be supported in their function lastingly, i.e. particularly by avoidance of pollutant emissions within these surfaces.

Open spaces with a very small cold air production within burdened areas possess only a minor urban climate importance. This concerns usually areas which do not have a connection to existing airstream channels due to their isolated position within the settlements. Furthermore these green spaces have not a compensation flow because of their small size. Nevertheless these areas can fulfil a function as a climate-ecological comfort island.

The residential areas can be subdivided into sufficient aerated areas respectively climatically favourable settlement structures on the one hand and burdened areas on the other hand. The affect range of the cold air producing areas marks the maximum outflow of cold air from open areas into the surrounding settlement during a low-exchange, cloudless summer night between 10:00 p.m. and 06:00 a.m. A cold air current should obtain a flow velocity of at least 0.2 m/s to be classified as climate-ecologically meaningful. From this it follows that the housing within a cold air effect range exhibits a predominantly small to no bioclimatic burden. Sporadically the burden level rises so much that it cannot be lowered by an arising cool air current.

To allocate a bioclimatic burden the degree of aeration is the decisive factor (mean wind velocity within a building block) as well as the positive deviation from the average area value of the evaluation indices PMV (Predicted Mean Vote, cp. also Map 04.09 Bioclimate at Day and Night). The PMV is consulted as a dimensionless factor for the nocturnal thermal load. By combination of the two parameters aeration degree and deviation of PMV the situation of bioclimatic burden was determined (cp. Table 3).

The rating class 4 “potentially moderate, in particular cases high” is present during an increased thermal load with a positive PMV deviation from more than 0.4. The flow velocity of the cold air is no longer relevant in this class. It modifies however the burden categories with a moderate thermal load from 0.2 to 0.4 in “potentially small, in particular cases moderate” with lack of aeration as well as “small” at cold air velocities > 0.2 m/s. The sensitivity of a possible intensification of use in settlement areas is associated with the bioclimatic burden. It can be considered as “very high” within the burden categories 3 and 4 and “high” within the remaining classes. This concerns mainly areas of high sealing (> 60 %) and covering degree (mostly > 50 %).

“Use intensification” means an increase in the built-up as opposed to the undeveloped proportion of an area. “This includes the transformation of the natural ground surface into a three-dimensional modelled space consisting predominantly of artificial materials, the resulting reduction of vegetation-covered surface area, and the effect of technical measures that cause waste heat and pollutant emissions” (Kuttler 1993).

Due to the limited amount of open space, measures for the relief of urban areas, including their build-up and densely-developed areas, are necessary. Of considerable importance in this regard is the greening of city spaces, streets, buildings and courtyards. In this way, overheating can be decreased, moisture level of the air can be increased and dust can be bound.

The heating of roofs depends very greatly on their colour and their material (cf. Map 04.06). Most favourable are greened roofs, with the type of plants playing a major role. However, the positive effects of such roofs, at their high locations, on the greatly burdened street area must be considered as limited. The greening of facades might have a greater overall climatic impact. Extensive investigations into the significance of facades and roof greening for the micro-climate were carried out in Berlin by Bartfelder und Köhler (1987).

The landscaping and/or the planting of vegetation for courtyard areas is also part of the climatic and clean-air improvement of residential areas. Narrow closed courtyards are characterized by a decrease in daytime temperatures and a slight cooling in the evening and nighttime hours. Insolation is greatly limited, as is air exchange, which creates a high pollution risk. The climatic condition improves with the greening of these courts, although facade-greening is more favourable for the promotion of air exchange than the planting of trees. Large courtyards clearly achieve more favourable climatic characteristics than narrow courts and street areas, especially if the degree of sealing is low and the vegetation is loosely structured. The cooling rate in the evening and nighttime hours is high. The air exchange is very good. A connection with adjacent smaller courtyards via vacant lots promotes this ventilation.

Climatically beneficial residential areas are characterized by an open settlement structure and a high portion of green spaces, of all functional regions they are most likely to the soonest potential for a structural compression. At present knowledge a careful compression of these areas will entail no re-classification into a climatically more unfavourable classification. At which magnitudes the individual limits for a structural compression are located can not be indicated overall; anyway options should be checked on the spot to compensate negative climatic effects by measures such as roof or facade planting or limitation of large building volume.

Within the street space the potential traffic-related air pollution along major roads marks road sections, in which the limit value of the 22. BImSchV is exceeded possibly and/or with a large probability. In how far beyond the actual street space also yard ranges respectively back building parts are concerned, could not be determined in the context of this surface covering modelling.

Air stream channels connect cold air generation areas (compensation space) and burdened areas (affected space) and are thus an elementary component of the air exchange. In consideration of the process types, four different air exchange types were worked out in the maps:

The determination of air-stream channels is geared to the autochthonous cold air flow field of the FITNAH-simulation. The determined air-stream channels are, with exception of river valleys, vegetation-coined surfaces with a linear adjustment on affected spaces. The classification of planning is oriented, similarly to the cold air generating green and open spaces, to the burden situation within the assigned residential areas. 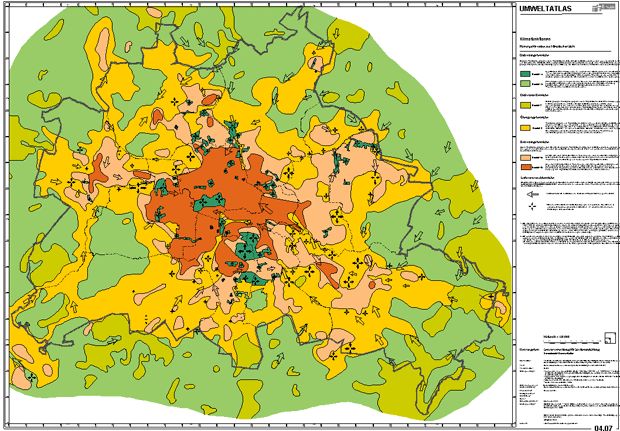 is based on a large amount of measured parameters, but the ascertainment of plain information and consideration of functional connections as well as interaction between the areas additionally requires the knowledge of the described flow fields. However, this area-wide information with an area size 0f 2.500 km² as covered by the FITNAH model, can only be obtained by numeric models. From this it follows that the previous classification of the burden level in urban areas as well as the compensation effects of green spaces exhibited a relative and not quantitative character.

Furthermore in the past favoured spaces for near-surface fresh air transport have been pictured and proposed for further examination only based on their structure characteristics respectively. Criteria for their suitability were above all a small surface roughness, sufficient width (if possible more than 10 times the height of the surrounding bordering structures) as well as a predominantly weak immission load. Only for few ranges there was a meteorological measurement. Although this procedure offers a descriptive typing of the relevant areas, the process system is, however, due to this rather static and structure-orientated approach, not considered or only considered indirectly. (VDI 1994).