In addition, the totals for the winter and summer halves of the water year are also presented. Table 1 displays the evaluation periods.

A correlation may be derived between the wind direction distribution predominant in the Berlin area and the influence of the city’s topography.

Figure 3 (SenUVK 2019) presents the mean wind direction distribution at the DWD station in Berlin-Tempelhof for all four seasons, differentiated by wind speed. Westerly winds of maritime and sometimes humid air occur frequently throughout the year. During the winter months, the influence of continental, often dry currents moving from the south to the east increases. 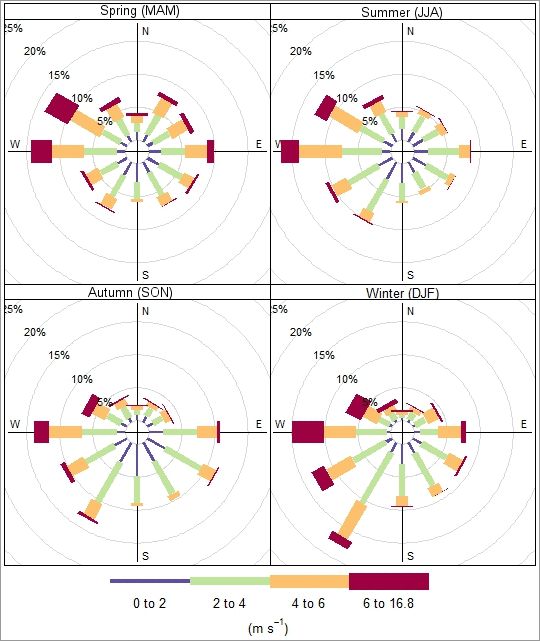 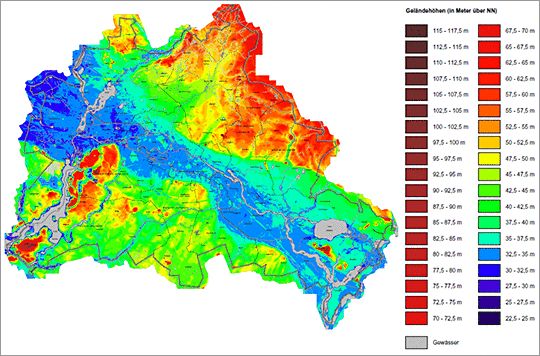 The aforementioned relationship between topography and the distribution of wind flows can be seen in the influence of the elevations in the area of the Grunewaldhöhenzug (hill in the Grunewald) and the Schäferberg (103.5 m). Here, precipitation is well above average, but drops by more than 30 mm towards the glacial valley. Shifting towards the east and beyond city boundaries, a continuous rise in precipitation becomes evident again.
The map characteristics do not provide any evidence that urban development impacts upon the precipitation distribution, as has been indicated by studies (cf. Introduction). Berlin’s development is still rather homogeneous in regard to height. This means that, on the one hand, there have been no artificial alterations of the soil roughness locally, alterations that could cause relief rainfalls. If the latter do occur, however, they are locally confined and rather spontaneous events that do not appear to have a noticeable impact on the long-term mean.

Table 2 presents a selection of statistic characteristic values for the long-term precipitation distribution from 1981 to 2010 for the evaluation periods indicated. The evaluations refer to the area of Berlin excluding surrounding areas.