The analysis of the stock of green space covered all green spaces in the area of the city with recreational qualities.

This analysis includes the green spaces and playgrounds presented in the Green-Space Information System (GRIS). It also involves both green spaces created as part of compensatory measures, such as the Rudow-Altglienicke landscape park, and areas maintained by Grün Berlin GmbH, such as the Britzer Garten and the Gärten der Welt in Marzahn. The grounds of the “Prussian Palaces and Gardens Foundation Berlin-Brandenburg”, such as the Schlosspark Charlottenburg are part of this, too. Berlin’s forest areas (open space type within the meaning of Urban Structure, Map 06.08) are also relevant in this context, as they provide at least some of the qualities that near-residential green spaces offer.

The following criteria were used to ascertain green spaces with recreational qualities:

Each green space with recreational qualities is assigned an intake area because Berlin’s standard values for the “availability of green space” define a combination of area size (m²/inh.) and accessibility (max 500m). The intake areas must be characterised by residential use (population threshold: 10 inh./ha). Green spaces in the neighbouring State of Brandenburg are not taken into account.

For smaller facilities, the centre is chosen as the point of origin of the radius; for larger spaces, the entrance area was used (approx. 100 m inside the open space). The intake area calculated for near-residential green space, for a distance of between 300 and a maximum of 500 m around that green space, only takes complete blocks and block segments into account.

Since the accessibility of a green space can be reduced by existing barriers, these will be addressed next. Barriers include e.g. rivers and canals, railroad lines, airports and motorways. If such barriers exist around a green space, the intake area is corrected.

Forest areas are also assigned an intake area because it is assumed that the edges of forests can to some extent assume the functions of a near-residential open space. Inhabited blocks in an intake area of 500 m from forest areas are categorised as having green space available in the city of Berlin.

Recreational use of agricultural areas is possible only to a limited degree, and only in some parts of the area; however, in the Berlin portion of the Barnim region, the areas accessible by footpath are included in the assessment. For this recreational area, the agricultural segments, including fields, meadows and pastures, are part of the park landscape.

For the calculation, all blocks are included in which more than ten inhabitants live per hectare. This so-called population threshold is established for the planning process to ensure that the automated analysis also considers the population living in areas with structure types with predominantly commercial, services, trades and industry, and those with “other uses”, without however including individuals, those living in industrial areas for caretaking or security purposes. In this way, more inhabited blocks can be included, especially in inner-city locations with key metropolitan use types, or mixed-use areas (cf. Figure 2).

Private and semi-public areas can compensate for a lack of public green space. For this reason, the structure of residential buildings is used to determine the overall availability of green space: it is an indicator for the supply of private open spaces. Single-family housing developments, for example, have yards. In the block edge development of the Wilhelminian period, on the other hand, it is difficult to spend time in semi-private green spaces, other than in courtyards or on balconies. In order to ascertain not only the availability of public green areas to the population, but also that of private green/ open space, the urban structure recorded in the Environmental Atlas (cf. Statistical Base) was divided into three structure type categories, each assigned different proportions of private open space (high – medium – low, cf. map legend). Examples of these respective types include single-family home areas, areas with row-house developments, and in contrast to these, the inner city residential blocks of the Wilhelminian period. 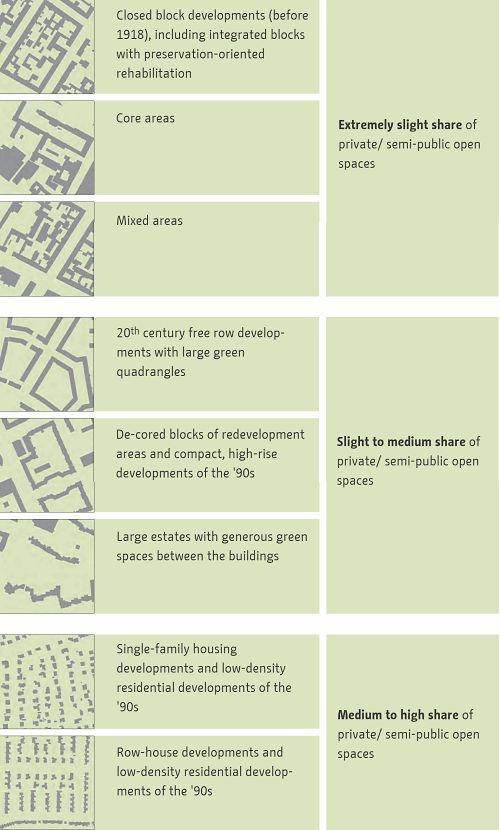 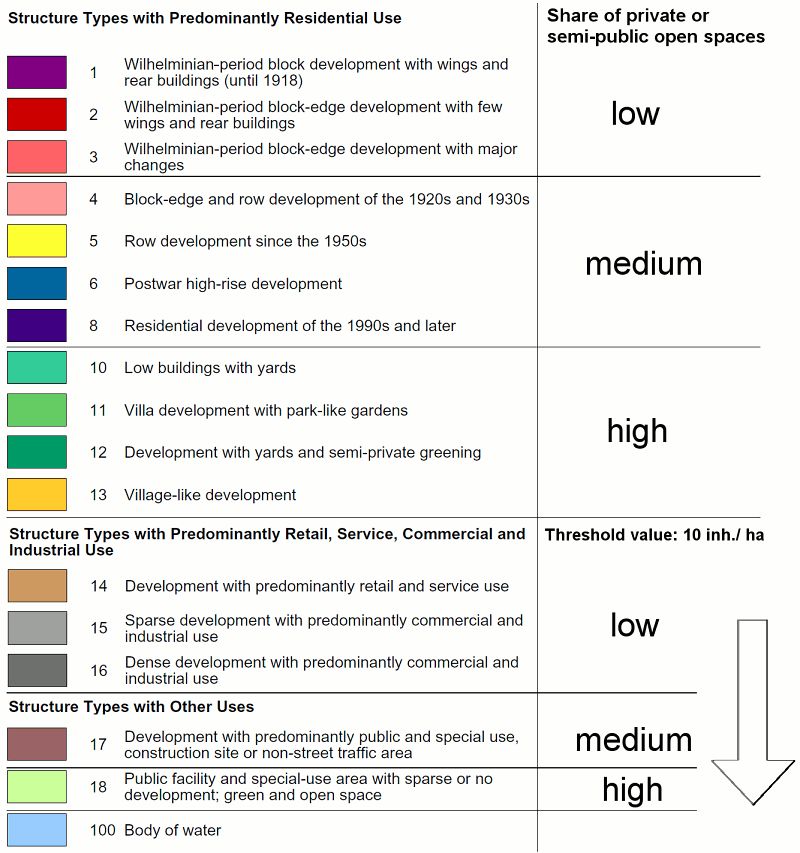 Fig. 2: Shares of private and semi-public open space within the urban structure types from the Environmental Atlas (cf. Statistical Base)
Image: Umweltatlas Berlin