The sediments of the entire flow distance of the lower Havel, Wannsee and Lesser Wannseekette (lake chain) are primarily to be viewed as heavily impacted with heavy metals.

Almost all waters running through Berlin flow into the Havel. The extremely low flow velocity of the Havel lake-like areas facilitates the sedimentation of transported suspended and precipitate matter. Lower Havel sediments have high impact values in the quality class 3-4 and 4 for the heavy metals cadmium, zinc, lead and copper. Relatively low concentrations were detected of chromium, quality class 2 and 2-3. Nickel contents of Lower Havel sediments were insignificant, in the range of quality class 1-2.

The Lesser Wannsee lake chain shows the influence of Teltow canal water inflows. The Teltow canal has been flowing over the Prinz-Friedrich-Leopold canal since 1905. Increasing zinc concentrations since this time can be detected.

The upstream Havel shows a lower heavy metal contamination in sediments than the Lower Havel. Pollution here can be traced back to the industrial centers of Oranienburg and Hennigsdorf, located north of Berlin.

The extremely different contaminations of the Teltow canal section from the Dahme tributary to Rudow, in West Berlin, are caused by land-fill barriers in the former border area between East and West Berlin. A sedimentation of suspended and precipitate matter occurred here primarily in the eastern section. The generally high values of heavy metals here, particularly cadmium, were caused by effluents from VEB Berlin Chemie.

Measurements of Spree sediments in East Berlin show lower heavy metal impacts, in quality class 1 to 2-3. The Spree here has not yet entered the highly settled areas of Berlin, and it has a lower sedimentation rate. These factors explain the differences in quality compared to sediments of the Lower Havel.

Table 3 gives the highest, middle and lowest values of heavy metal impacts in sediment samples taken from the Havel waters and the Teltow canal by the frozen-core bore method. Extremely high heavy metal levels were determined at a few measurement bore sites, values which exceed by several times the limit values for mud of the Sewage Sludge Regulations (AbfKlärV of 15 April 1992). 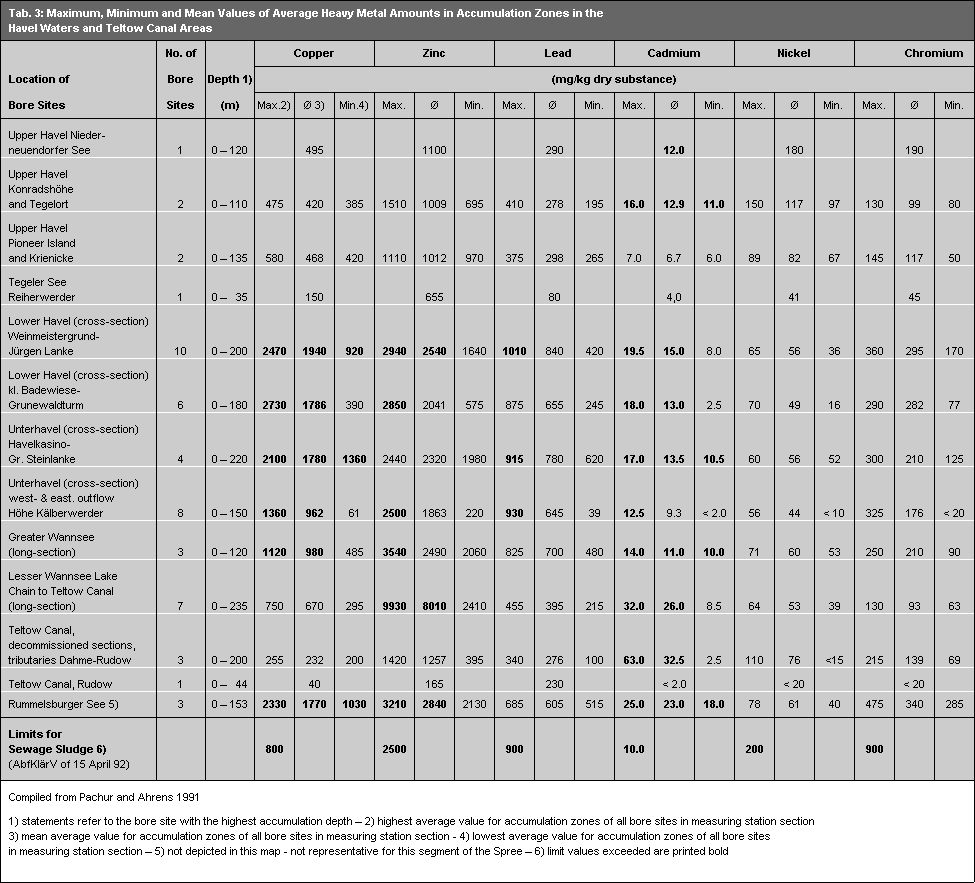 Pesticides and PCBs in Sediments

Sediments of the Upper Havel, the Dahme and the Spree at the beginning of its urban segment show only low to moderate PCB concentrations of quality class 2.

PCB sediment impacts in the Teltow canal area differ greatly, from quality class 1-2 to quality class 4. Conspicuous here are the high PCB values in the Tempelhof and Mariendorf harbor areas, below the outflow of the Lichterfelde-Lankwitz rainwater collection canal, and below the sewage treatment plant discharges from Wassmannsdorf, Mariendorf and Ruhleben.

Impacts of DDT in sediments are considerably smaller, on the whole, compared with PCB. The main areas of contamination are the Teltow canal and a few sections of the Lower Havel. High impacts in the upstream Teltow canal and the Neuköln ship canal can be traced back to the influence of discharges and sewage water inflows from the premises of VEB Berlin Chemie.

PCB, DDT and Lindane measurement results are based on tests of the upper sediment layer. Further tests regarding the vertical range of CHCs show the presence of older inputs in deeper sediment layers. PCB measurement values in particular indicate that migration (transport within the ground) is taking place. Current knowledge of migration behavior indicates that potential long-term pollution of groundwater or of bank-filtered drinking water cannot be ruled out.

Pesticides and PCBs in Eels

The degree of PCB contamination of fish depends primarily on impacts in individual waters as well as the species-specific tendency of fat deposition. The fat fish species eel in Berlin waters is particularly affected. Almost a quarter of eels sampled by the Berlin Office of Fisheries in 1989-90 have levels exceeding the highest values set by laws for foodstuffs.

The relationship between PCB contaminated water sediments and high PCB amounts in eels is clear in the Lower Havel area and the downstream area of the Teltow canal. Eels have high PCB levels paralleling high PCB levels in sediments.

Eels in the Grunewaldsee and Hundekehlesee (lakes), on the other hand, are heavily contaminated with PCB even though PCB amounts in sediments are low. This area was recently dredged. It can be supposed that the tested eels were older and that their contamination was based on sediment pollutions that existed before dredging.

The fatty fish eel is also affected the most by DDT contamination of water sediments. Effects of DDT contaminated sediments are reflected in higher levels in eels.

High DDT amounts in eels from the Greater Grunewald lake chain indicate the persisting effects of DDT inputs about 40 years ago. These waters were treated with DDT to reduce mosquito populations.

The reduction determined in PCB and DDT contamination in fish species native to Berlin waters led to the lifting of the marketing ban prohibiting the sale of fish in 1992. The reduction of pollutants in fish was achieved by the ‘rejuvenation’ of fish stocks, by eliminating older fish. In the middle and long term, however, only a very slow reduction of pollution in benthonic fish species is to be expected, especially in regard to PCB, for the implemented measures did not remove the causes of fish pollution. Reduction of pollution can only be achieved to the degree that lower pollution inputs result in less contaminated sediments.