Groundwater Levels of the Main Aquifer and Panke Valley Aquifer 2009

Current Hydraulic Situation in May 2009

In May 2009, the phreatic surface, which has been lowered in Berlin by drinking-water discharge over the past hundred years, was at a relatively high level compared to 1989 (Limberg et al. 2007: pp. 76 et seq.).

The overall discharge of raw water by the Berlin Water Utility for drinking water purposes dropped by almost half in Berlin during a period of 19 years. In 1989, 378 million cu.m. were discharged, as opposed to 219 million cu.m. in 2002. In 2003, the discharge briefly increased slightly to 226 million cu.m. due to the extremely dry summer, but then dropped again by 2008, reaching 205 million cu.m. (Fig. 10). 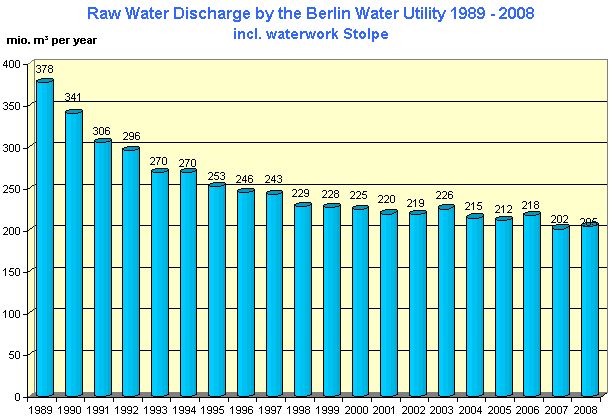