Description by Land Use Categories

The highest degrees of sealing occur in old residential areas within the city rail circle line. Residential blocks constructed with mostly closed courtyards have a sealing degree of over 90%. But large industrial and small business areas are also strongly sealed, especially areas along the Spree River from Spandau to Köpenick used industrially for a long time, and the large industrial areas in the Lichtenberg, Marzahn and Hohenschönhausen boroughs, which are over 90% sealed.

Taken as a whole, the degree of sealing generally decreases from the inner city towards the edge of the city. This corresponds to the fact that development is looser at the edge of the city. The city edge is either completely undeveloped (forest, agriculture) or contains areas of single-family homes. Exceptions are conspicuous. The matured development of cities independent until 1920, like Spandau and Köpenick, have a sealing degree around 60%. Their core areas are over 90% sealed. The large new high-rise housing blocks at the city’s edges, like Marzahn, Hellersdorf, Hohenschönhausen, Gropiusstadt in Rudow, and “Thermometersiedlung” in Lichterfelde have a sealing degree from 50-80%. 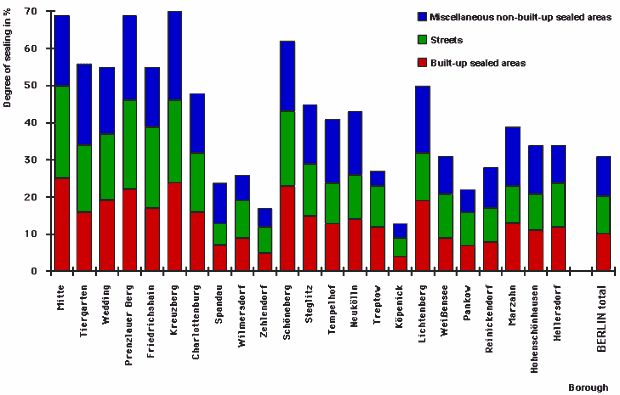 The loosely built-up areas at the edges of the city have differing sealing degrees. More remote locations like Heiligensee, Frohnau, Kladow and Müggelheim are low density, with sealing degrees between 10 and 30%. The classical single-family and row housing areas in Lichterfelde, Marienfelde, Kaulsdorf, Mahlsdorf, Karow and Blankenburg have sealing degrees between 20-40%. Areas that include more urban functions, like Dahlem, Westend and Friedrichshagen are up to 60% sealed.

Forests and agricultural areas are usually unsealed. But there are uses that have conspicuously high sealing degrees. Multiple uses in Grunewald make it look like a patchwork quilt on the map. Military and former military areas (Teufelsberg, firing ranges and ammunition depots), a tree nursery, allotment gardens and equestrian areas sometimes have high sealing degrees. Conspicuously high sealing degrees are also present around the broadcast tower atop the Schäferberg in Düppel Forest, and around two large day-trip restaurant areas in Köpenick’s Bürgerheide, with their very large parking lot at the south shore of Müggelsee Lake.

Traffic areas take up 9.1% of Berlin’s total sealed area. In the inner-city bourough of Kreuzberg is this 20 % of the entire bourough surface. For Köpenik on the edge of the city, it is only 4 %, compaired to 5 % of the built-up and not built-up area, an image of the lower density settlement areas in this district.

Berlin is about 34,3% sealed, whereby less than half is non-built-up sealed (see Fig. 2). The average sealing degree is for the total area of a borough or the city. Built-up areas and streets are illustrated in the total borough area.
The built-up sealed ratio amounts to 10,6 , areas of streets relating to the entire area of Berlin 9,1 %. Köpenick with 15 degree of sealing is the least sealed borough. Kreuzberg, Mitte and Prenzlauer Berg boroughs are the highest, 72, 73 and 69 % sealed. The proportion of built-up area is also greatest in these boroughs.

Berlin and its metropolitan area are predicted a strong growth rate over the next 20 years. Berlin’s location has become attractive since the reunification of Germany and may become an intersection of East-West trade. There will be an enormous demand for space which will lead to an increase in sealing, among other things