The map of Total Runoff (Map 02.13.3) shows that the total runoff for the highly impervious inner-city areas (inside the Urban-Rail Ring Line) is in the range of 350-450 mm/a; the values are even higher in the very dense centre-city area and in some industrial areas. Here, only about 150 mm/a (Map 02.13.5) evaporate, referenced to the precipitation measurements (at 1 m height), which are about 10-15 % less than ground-level precipitation. The less densely built-up areas in the outskirts of the city show runoffs of 250-350 mm/a. Compared with the runoffs of the pervious areas on the outskirts, or in the areas surrounding Berlin, where the values are approx. 150 mm/a, Berlin can be considered an island of greatly increased runoff. The reduction of the evaporation due to imperviousness and lack of vegetation – as shown in the map Evaporation (Map 02.13.5) – leads to runoff double or triple the natural runoff.

Groundwater net consumption (depletion) occurs only in a few areas characterized by low precipitation and simultaneously low depth to the water table, which produces negative runoff formation values, since here, the vegetation is fed by groundwater, and can evaporate more of it than can subsequently be supplied by precipitation.

The Percolation map (02.13.2) shows a picture that is surprising at first glance: It shows inner-city percolation from precipitation of about 120 mm/a – roughly the same as for woodlands. The non-densely built-up residential areas on the outskirts show considerably higher percolation capacities of 200 mm/a; the values for the areas with low degrees of connection to the wastewater/sewage system in fact climb to 300 mm/a. In the residential areas with no connection to the sewage system, all the runoff percolates into the soil, averaging about 300-350 mm/a and reaching maximum values of over 400 mm/a.

In the Glacial Spillway area, the percolation water can percolate directly and completely to the groundwater surface, due to the permeable sands which overlay the groundwater. Here, the calculated percolation is equal to new groundwater formation. On the Barnim and Teltow ground-moraine plateaus however, loamy and thus poorly water-permeable layers overlay the mostly confined groundwater. Here, the deeply cut streams are fed largely by confined groundwater or via sandy and hence permeable layers in the ground moraine. Only that part of the percolation water (calculated percolation) not passed on by the tributaries can be considered true recharging of the main aquifer beneath the ground moraine. These water quantities reach the glacial spillway area as sub-surface runoff. The break-down is respectively dependent on the concrete hydrogeological conditions. A comparison of the runoffs measured and calculated shows that e.g. in the catchment area of the Neuenhagen Mill Stream, some 35 % the calculated percolation percolates sub-surface to the glacial spillway area, while the Tegel Creek passes virtually all of the runoff it receives from the percolation of its catchment area on at the surface. A map of new groundwater formation has also been developed on the basis of the percolation-water rates determined by means of the ABIMO model (Map 02.17 as of 2019).

The evaporation from bodies of waters surfaces, which are not shown on the map, is approx. 152 mm/a more than the precipitation which falls on them, so that Berlin’s bodies of water lose a total of approx. 8 million cu. m. of water per year due to evaporation.

For some very highly impervious areas, no information was available as to whether the rainwater from them is passed on via the wastewater system. For this reason, runoff for these areas has been certified in the maps as percolation. However, the degree of impervious coverage and the amount of runoff makes it seem in some cases improbable that the water actually percolates into the soil. As a result, it is likely that the share of surface runoff tends to be underestimated, and that that of percolations overestimated.

With the aid of the area sizes of the reference surfaces, the runoff volumes could also be calculated and then totalled (cf. Tab. 4). 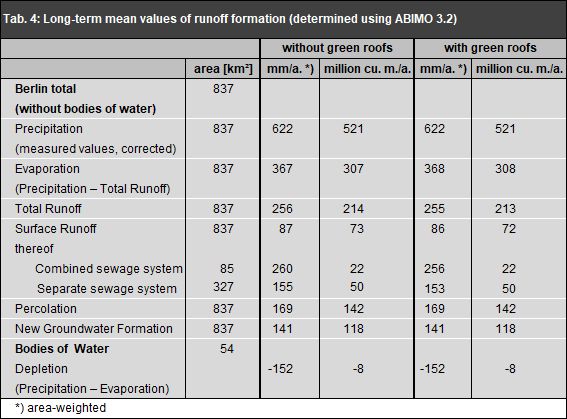 Tab. 4: Long-term mean runoff formation values, with and without consideration of the planted roofs, as of 2017
Image: determined with ABIMO3.2

The calculations show that about 60 % of the precipitation evaporates, and thus about 200 million cu. m./a are available as total runoff. Two thirds of the total runoff percolates into the soil, while one third is removed by the wastewater system. Although the combined sewage system covers only about one quarter of the total area served by the wastewater/sewage systems, it accounts for a third of total surface runoff. Comparing the annual percolation quantity of approx. 140 million cu. m., which, as stated above, is not entirely fed into the groundwater, with drinking water consumption of approx. 200 million cu. m./a (AfS 2016), obviously yields a considerable deficit. This deficit is compensated for by surface seepage (from the Spree and Havel rivers) as well as sub-surface influx of groundwater from the surrounding countryside. The surface water is used as shore filtrate at near-shore groundwater withdrawal facilities, and for groundwater charging at the waterworks.

Considering the changes compared with the 2013 edition figures, the most noticeable fact is that the long-term mean of total runoff and surface drainage has continued to rise, and that evaporation has reduced. These changes can be attributed to the further increase in impervious coverage of the soil and the expansion of the wastewater network for the removal of rainwater.

Tab. 4 also shows the still small influence of the approx. 400 ha planted roof area on the total area of Berlin. However, large differences exist locally. Taking into account the green roofs throughout the state, the evaporation increases by 1 mm/a in total. The table shows that the effects of the roof planting is particularly significant in the area of combined sewers with high degrees of connection to the sewage system. In this area there are approx. 160 ha green roofs (approx. 40 %). It can be assumed that the number of green roofs has increased since 2016 (year of the green roof survey), which means that the green roofs have a greater influence in reality.

The hypothetical potential of the roof planting with regard to the water balance can be determined by calculating the water balance variables, assuming that all roofs in Berlin are planted (approx. 10,800 ha instead of the current 400 ha). The evaporation would then increase by a further 8 % and surface runoff would reduce by a further 22 %. 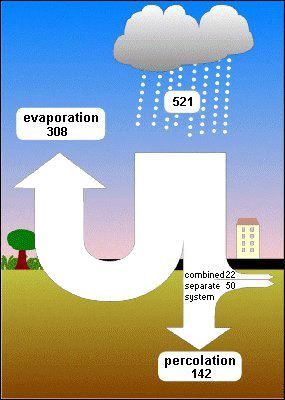 For each a served by the separate-wastewater system, the Information System provides data as to the tributary, body of water or body-of-water segment into which that section is drained (cf. Map 02.09.2, 2018 edition). As a result, it is possible to generate balance sheets stating the amount of rainwater which each body of water has to receive, on average. About 200 bodies of water or body-of-water segments are involved. Table 5 shows the amounts of introduction into the Berlin waters, summarized by segments. Except for those quantities which at heavy rainfall flow through the emergency outlets of the pumping stations and through the rain overflows of the wastewater network, and then also flow directly into the bodies of water, the surface runoff in the area of the mixed system is passed to the sewage treatment plants, from where they are fed into the bodies of waters after appropriate sewage-treatment, together with the treated sewage. 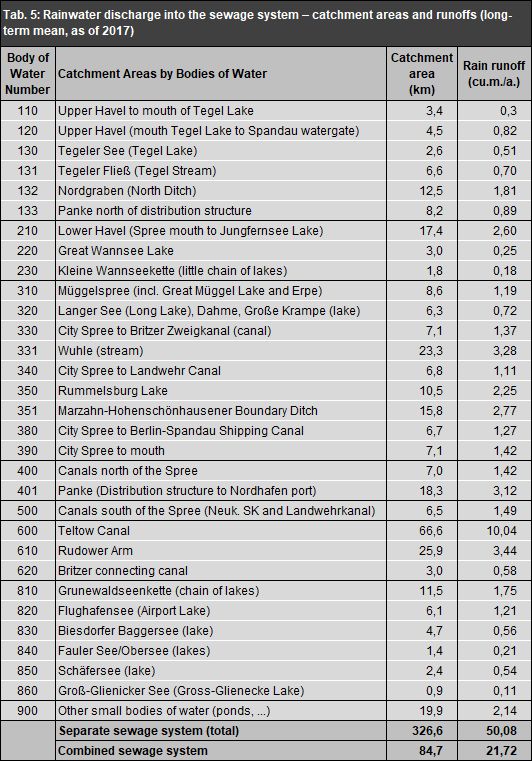 The ABIMO 3.2 model or programme is an instrument with which simulations can also be carried out under modified circumstances. In particular, this could include an assessment of the likely changes in the water balance to be expected due to climate changes (Löschner 2008) or urban development projects, or of measures for the restoration of pervious situations, including the disconnection of areas from the wastewater system, to permit percolation of precipitation there. With appropriately differentiated data, the programme can also be applied on a small scale for projects at the single-lot level. Changes of the model parameters by incorporation of current findings are possible at any time. It must be emphasised that the ABIMO 3.2 can only be used to model annual mean values. It is not possible, for example, to simulate heavy rainfall events.

Percolation without consideration of impervious cover

With 200-250 mm of annual percolation, the greatly anthropogenically transformed, yet pervious, surfaces of the inner city and the industrial areas achieve the highest percolation capacities in the municipal area, followed by the predominantly sandy areas of the Glacial Spillway and the sandy parts of the plateaus, with approx. 150-200 mm. If the sandy soils are woodlands, the average annual percolation drops to 100-150 mm, since the trees, due to their root depth, allow considerably more water to evaporate. Due to the higher retention capacity of the loamy soils of the Teltow and Barnim plateau areas, considerably more water can also be evaporated by the vegetation there, so that only approx. 50-100 mm percolates into the soil. In areas with near-surface groundwater, increased evaporation is caused by the capillary rise of groundwater into the evaporation-influenced soil zone, so that only an annual average of less than 50 mm percolates into the soil. If real evaporation is higher than precipitation, net water consumption occurs, i.e. the calculated values are negative.

The percolation capacity indicated in the map is only reduced to zero by impervious coverage if the planned coverage is actually completely impervious to water (roof surfaces, asphalt) and the precipitation water of these sections is passed entirely to the wastewater system. If partially water-permeable impervious coverage is planned, or if the precipitation water runoff is to be only partially passed into the wastewater system, corresponding modification must be incorporated into the calculations with regard to the reduction of imperviousness. For more exact calculations, application of the ABIMO runoff model is recommended, in which simulated data for planned surface structures can be entered as input data, so that the actual state and the plan can be compared.