For the evaluation of the data from the monitoring of the general chemical-physical condition of the water, the target stipulations based on the LAWA procedure for the chemical classification of bodies of water (LAWA 1998) are used. This classification is used for the parameters oxygen, chloride, sulfate, ammonium nitrogen, nitrite nitrogen, nitrate nitrogen, AOX and TOC, shown on the strip maps. In the developed classification scheme (see Tab. 1), Quality Class I corresponds to the geogenic background value for the substances occurring in nature, such as nutrients and salts, while Quality Class II (target) covers the protection of the biotic aquatic association as well as other criteria for the prevention of water pollution. The other classes have been established by multiplication by a factor of 2.

On the other hand, nitrates in the concentrations which occur have no toxic relevance, even for sensitive water organisms. The significance of nitrates lies rather in their function as a nutrient in nitrogen-limited bodies of water. Paradoxically, higher nitrate contents can in fact have an ecologically stabilizing effect. In particular, nitrates as an alternative oxygen supplier can also check the processes of phosphorus re-dissolution at the interface between the sediment and the open water, and hence also check eutrophication.

The classification of chloride, AOX and TOC has more of an indicator role. For instance, chloride concentrations of around 100 mg/l are indeed an expression of anthropogenic influences, but they are ecological quite safe. Sulfates can reach values considerably greater than 100 mg/l, due to either geogenic or anthropogenic causes. In ecological regard, eutrophication-promoting processes are being discussed in connection with higher sulfate values. Sulfates certainly have an additional significance for the drinking water supply in the Berlin area as of Quality Class II-III. For phosphorus, a classification adapted to natural areas has been developed with reference to the eutrophication effect, in comparison with the classification “plankton-dominated streams (LAWA 1996).”

The temperature values were classified according to a Berlin-specific approach for summertime-lowland bodies of water. 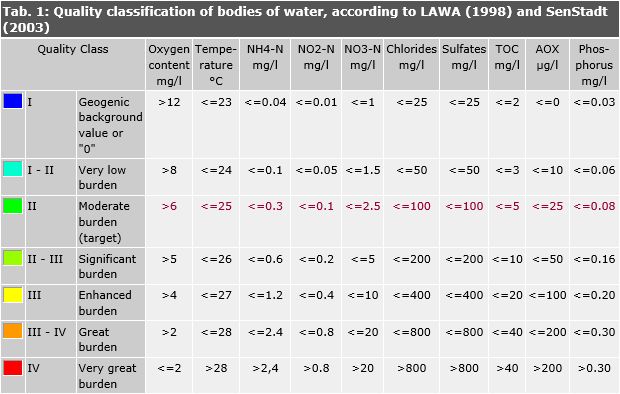 The water-quality mapping shows the development of the key quanta of the water composition of the Berlin bodies of water during the period from 1991 to 2001 (key values for odd-numbered years), which are shown in the strip maps.

The strip map consists of six separate strips which as a rule show the period from 1991 to 2001 in two-year stages. The direction of flow is determinant. The strip for 1991 is marked by a thick black border. Depending on the respective parameter, the area boundaries have been drawn such that significant immission points of sewage plants or power stations which can bring about changes of the values are included. The spatial representation is based on the fact that each measurement point represents the evaluation for a relatively homogeneous section. This convention has to be taken into account for the interpretation of the map. The location of the test points is shown as a red dot with a test point number. The location of the measurement stations for continuous measurement is shown by green points. The individual strips of the bodies of water are colored according to their class assignment.
The measured values for the parameters for each year can be viewed in a separate window by clicking on the colored segments (mark the function “display data” in the menu below the map and click in the map). Strip sections not shown in color indicate that no data were found there for the time period in question. No data can be revealed by clicking the quality measurement points and measurement stations.